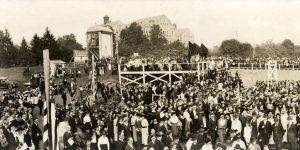 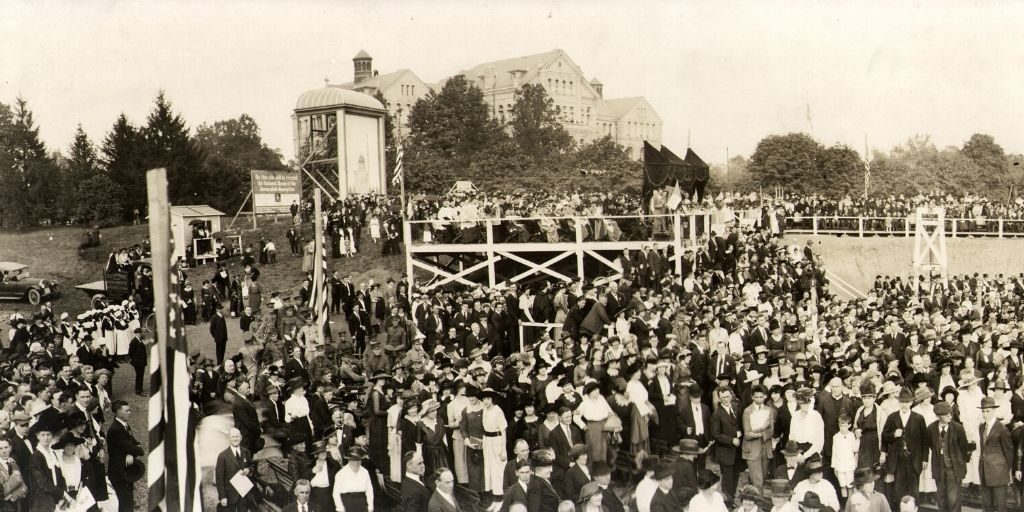 As we approach the National Shrine’s centennial, we’re taking a look at some of the most significant events in its history with this collection of historic photos. It stands today as a beautiful testament to faithful efforts of American Catholics throughout the past one hundred years, as they strove to bring the National Shrine to completion. 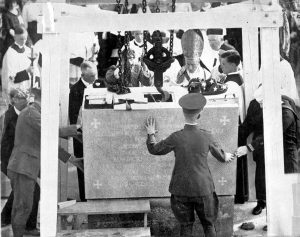 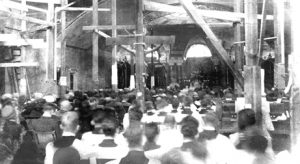 On April 20, 1924, Catholics gathered to celebrate Easter Sunday with the first public Mass held in the National Shrine. It took place in the Crypt Church, which was still under construction. Pews were not yet installed; attendees sat in folding chairs and were surrounded by exposed joists and support beams. Lighting was provided by candles, and an altar rail was created out of benches draped with white cloth. In spite of the makeshift conditions, about 3,000 people attended the Mass. 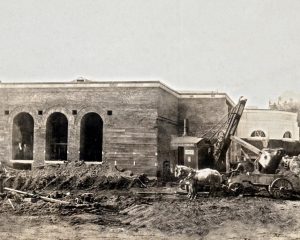 During the summer of 1924, workers excavated for the area of the Crypt Church now known as the Hall of American Saints. They used a combination of manual and mechanical tools and techniques – hand digging, plows, and horses, as well as tractors and steam shovels. 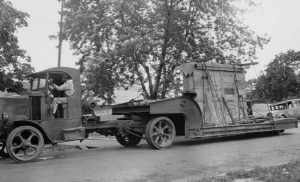 On June 17, 1930, the Immaculate Conception mosaic arrived at the National Shrine. A gift of Popes Benedict XV and Pius XI, the mosaic weighed over 3 tons and was over 10 ft. tall, requiring a group of strong men to hoist and position it in the National Shrine. 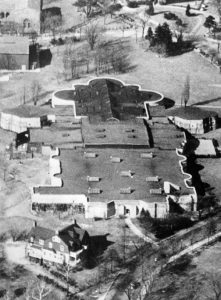 The Crypt Level of the National Shrine Is Completed (1931)

1931 marked the completion of the Crypt Level, but construction for the rest of the National Shrine came to a halt due to the death of Bishop Shahan, the years of the Great Depression, and the events leading up to World War II and beyond. 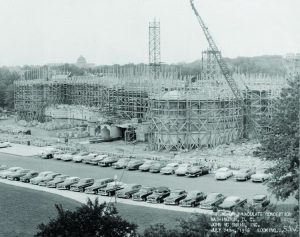 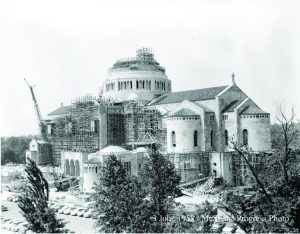 With the majority of the limestone work complete, workers began ornamenting the exterior and constructing the Great Dome. 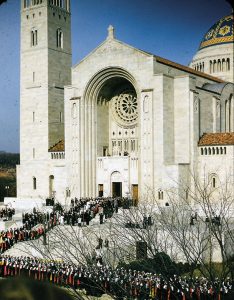 Thousands gathered for the blessing and dedication of the National Shrine upon the completion of the superstructure of the Great Upper Church, nearly 40 years after the foundation stone was placed. At the time of the dedication, the only mosaic installed in the Great Upper Church was Christ in Majesty. Ornamentation and embellishment of the National Shrine have continued ever since. 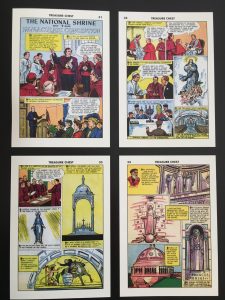 The completion of the National Shrine was celebrated by Catholics across the country in many different ways – including a feature in the comic book Treasure Chest of Fun & Fact, which was available through the parochial school system. 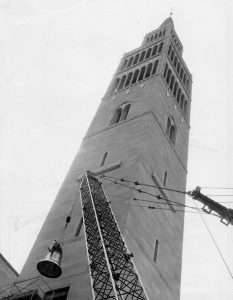 Gifted by the members of the Knights of Columbus, the Knights Tower is one of the tallest buildings in the District of Columbia. Second only to the Washington Monument, it rises to the staggering height of 329 feet. In 1963, the Knights blessed the National Shrine with another gift: their very own carillon. On July 14, 1963, Archbishop O’Boyle consecrated the bells that were to be added to the Knights Tower, and on July 23, the carillon was successfully installed. Robert Grogan was the first carillonneur at the National Shrine and still plays its bells today. 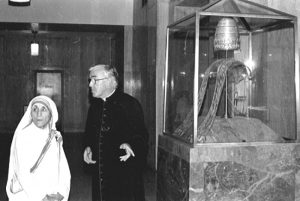 In 1972, Mother Teresa visited the Basilica for the first time. This would be one of several visits by the saint, the last of which was in 1995, only two years before her death. 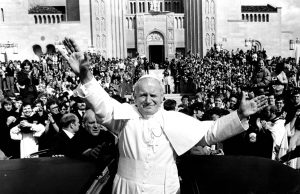 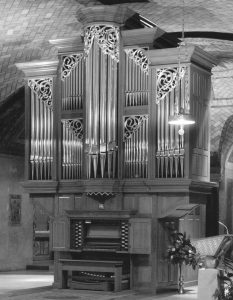 The Schudi organ of the Crypt Church was dedicated on November 20, 1987. Requiring over 7,000 hours of labor, this unique instrument was built according to a Baroque design by Gottfried Silbermann, who was a friend of J.S. Bach. The dedicatory plaque carries the inscription Soli Deo Gloria, a phrase Bach inscribed on many of his compositions, meaning “Glory to God alone.” 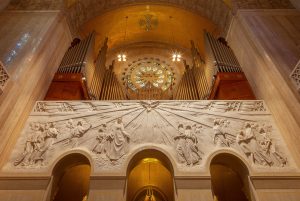 In celebration of the 40th anniversary of the National Shrine’s dedication, The Universal Call to Holiness relief is finished and dedicated. Measuring 780 square feet and weighing over 37 tons, the marble relief depicts people of all rank and status being drawn to the Holy Spirit. 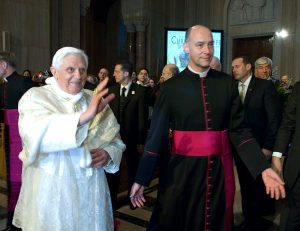 On April 15, 2008, Pope Benedict XVI visited the Basilica, presiding over evening prayer and bestowing upon the Basilica “a Golden Rose for our Mother Mary,” which Monsignor Rossi graciously received on the Basilica’s behalf. As his visit happened to fall on his 81st birthday, prior to his departure, the bishops of the United States sang “Happy Birthday” in his honor. 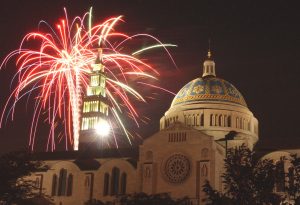 On November 20, 2009, the Basilica of the National Shrine of the Immaculate Conception celebrated the 50th Anniversary of its dedication. To celebrate its Jubilee Year, the Basilica hosted Pilgrimage Saturdays on the third Saturday of each month through November 2009. During the Jubilee, there was also an Anniversary Exhibit featuring photographs, artifacts and memorabilia of the history and construction of the National Shrine. 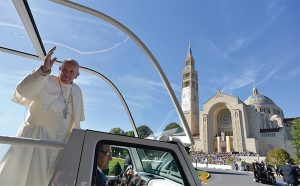 Pope Francis visited the Basilica on September 23, 2015, blessing the first segment of mosaic art that now adorns the Basilica’s Great Dome, the Trinity Dome, and presiding over Mass on the Basilica’s east portico, which had been transformed into a beautiful sanctuary for the Canonization Mass of Junípero Serra. A congregation of 25,000 faithful from across the United States, including a contingent of Native Americans from California, were in attendance for this first canonization to take place on American soil.

On December 8, 2017, the Solemnity of the Immaculate Conception and the patronal feast day of the National Shrine and of our nation, Monsignor Walter Rossi, Rector of the Basilica, welcomed a standing-room only congregation of more than 5,000 of the faithful to perhaps the most momentous occasion in the history of America’s Catholic Church. “As we give glory to God this day for the gift of the Blessed Virgin Mary,” Monsignor Rossi said, “we also raise our eyes to the heavens as we dedicate the crowning jewel of Mary’s Shrine, the Trinity Dome. This magnificent mosaic brings to completion the building of the National Shrine begun 97 years ago when the foundation stone was placed on September 23, 1920.” 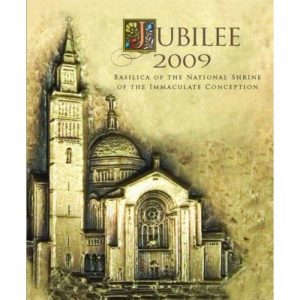 Purchase the Book
The Impact of Pope Pius X on the National Shrine
The Spiritual Leadership of St. Bernard of Clairvaux