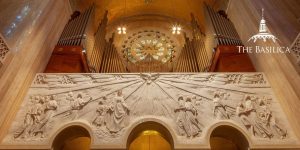 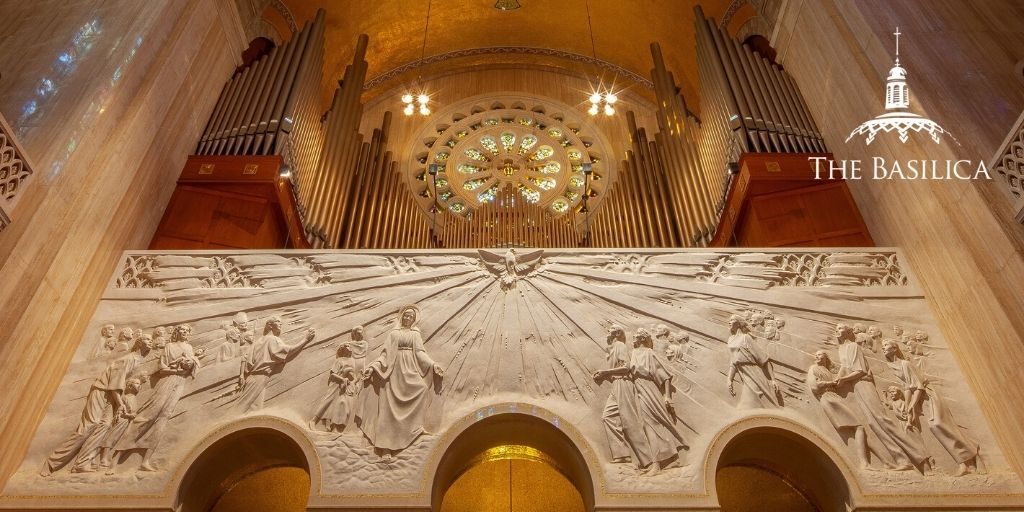 One of the largest relief sculptures in the world, The Universal Call to Holiness offers an awe-inspiring visualization of a profound spiritual reality: that the call to holiness extends to all peoples of faith in all times and places. Weighing over 37 tons and spanning 780 square feet, the relief portrays people of all ethnicities, ages, rank, and status being drawn to the Holy Spirit. The almost 50 figures depicted include the Virgin Mary, Pope John Paul II, Mother Teresa of Calcutta, and Cardinal Hickey.

The Significance of the Universal Call to Holiness

During the conception of the relief, James Cardinal Hickey first suggested the theme of universal holiness, as expressed in §40 of the dogmatic constitution Lumen Gentium:

All the faithful of Christ of whatever rank or status, are called to the fullness of the Christian life and to the perfection of charity; by this holiness as such a more human manner of living is promoted in this earthly society.

An Italian Botticino-Classico marble sculpture, The Universal Call to Holiness was designed by artist George Carr. When interviewed by Journey Films, Carr described the message of the relief, as well as his artistic process in making that message materialize, remarking:

It’s based on the idea that all of us – no matter who we are, or what our background is – we are all called to be holy. What I’m looking for in the faces of the people is a sense of awe, wonder, and yet no fear. They are being drawn to something, something they trust. It’s a challenge to try to express in concrete form something as personal, as intangible, as holiness.

Creating and Carving the Sculpture

To begin, Carr planned the concept for the relief with sketches, then created a 1/6th-scale sculpture prototype, consulting human models as references for the work. Finally, he created a full-scale model of clay measuring 52 feet by 15 feet – a work so large that he could not complete it alone, having to enlist two assistants to help him.

When the full-scale model was complete, it was cast in plaster and shipped to Pietrasanta, Italy, to be carved into stone. Pietrasanta, which means “sainted stone,” is a town with a centuries-old tradition of marble artisanry. There, master carver Franco Cervietti led a team of 22 other marble artists in the project, which took over a year to complete.

Once the carving process was finished, the relief was packed up and shipped to Washington, D.C. in 16 pieces. Some of the individual pieces weighed over 9,000 pounds and were lifted to the Basilica with a crane. Transporting the pieces across the marble floor of the Basilica required the invention of a special 300-foot long rail system that allowed the pieces to be pushed manually across the floor.

One architect involved in the installation process, Tony Segreti, remarked:

In some ways this project is like building the pyramids all by hand. We had the option to use electricity, but we decided that it was too risky because of the stop and start and jerks that you get with an electrical traveling crane, so what they devised here was a manually driven crane.

Using a system of cables, handles, and chains to guide the indoor crane, the architects secured the pieces of the relief into place manually in a tedious process – 36 inches of the chain had to be hand-pulled by workers in order to move a piece by just half an inch!

As the original rear wall of the Upper Church was built without anticipating the addition of nearly 40 tons on its face, the wall had to first be reinforced to carry the weight before the relief could be installed. It took nearly two weeks for the final installation to be completed. 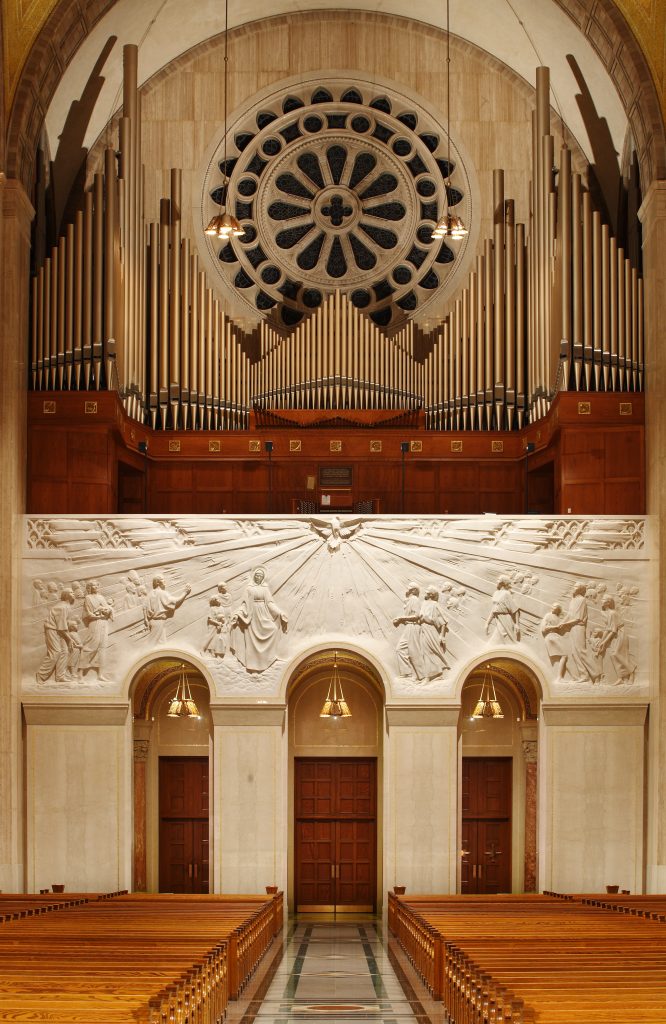 On November 14, 1999, over 2,500 worshippers and 60 bishops gathered to dedicate The Universal Call to Holiness in celebration of the 40th anniversary of the dedication of the National Shrine. Speaking at the dedication, Cardinal Hickey remarked:

It is more than a work of art – it is a proclamation in stone that we are gathered to bless.

Today, it remains a focal point of the Basilica’s sanctuary, inspiring the congregants of “America’s Catholic Church” to pursue holiness in their own lives.

Making the LEGO Basilica: A Conversation with Artist John Davisson
“For Such a Time as This” – the Story of Esther