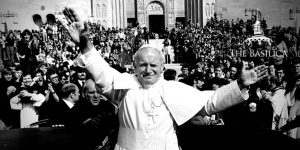 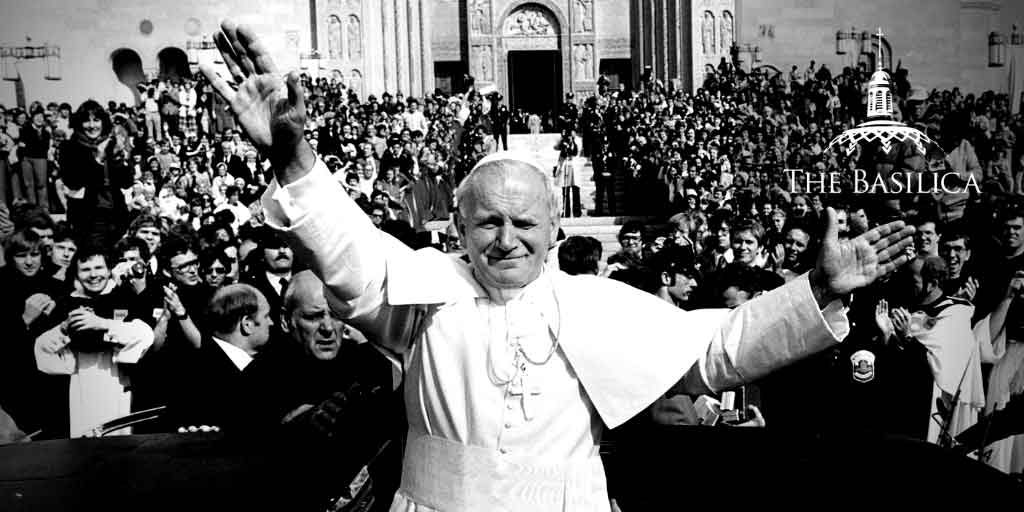 Excerpt from the book: America’s Church: The Basilica of the National Shrine of the Immaculate Conception

Early on the morning of Oct. 7, 1979, the National Shrine experienced what was described as its “finest hour” as the 263rd successor to the Apostle Peter ascended its granite stairs and entered the Great Upper Church.

The historic visit of Pope John Paul II to the National Shrine provided the ultimate affirmation for this church, which from its beginnings had sought the approval and encouragement of every pope of the 20th century. This was not Karol Wojtyla’s first visit to the National Shrine, but it was the first time that a reigning pope had come to pray beneath the Shrine’s great dome.

Early in his papacy, Pope John Paul had emphasized that he did not intend to follow the example of his predecessors – “prisoners of the Vatican” – whose excursions took them scarcely beyond the 108.7 acres of Vatican City State. Rather, he would be known as the “Pilgrim Pope,” traversing the globe in witness to the Gospel of Christ and to his role as “Universal Shepherd.”

The Pope’s visit to the National Shrine, less than a year after his election, had as its primary purpose a major address to women religious of the United States, following the ancient Morning Prayer liturgy of the Church. As the Holy Father’s motorcade turned into the main entrance of the Shrine from Michigan Avenue at approximately 8:30 that morning, the great bells of the Knights’ Tower pealed in joyful celebration. A banner affixed high on the exterior of the tower bearing the Pope’s coat of arms with his chosen motto, Totus Tuus (“Totally Yours”), was visible from far and wide. As the Pope disembarked his limousine…the thousands who had assembled to welcome him cheered wildly and shouted, “Long live the Pope – John Paul II, we love you!” He paused briefly at the top of the steps of the Shrine to speak to the many students and others who had spent the night in an outdoor prayer vigil in anticipation of his visit. At the main doors, the women religious of the Shrine staff presented the Pope with a bouquet of flowers.

In his address to the gathered religious women, the Pope reaffirmed the Shrine as an important national sanctuary which represents the diverse modes of faith and devotion that constitute the Catholic Church in the United States. In part, he proclaimed:

“This Shrine speaks to us with the voice of all America, with the voice of all the sons and daughters of America, who have come here from the various countries of the Old World. When they came, they brought with them in their hearts the same love for the Mother of God that was characteristic of their ancestors and of themselves in their native lands. These people, speaking different languages, coming from different backgrounds of history and tradition in their own countries, came together around the heart of a Mother whom they all had in common. While their faith in Christ made all of them aware of being the one People of God, this awareness became all the more vivid through the presence of the Mother in the work of Christ and the Church.”

As Pope John Paul II concluded his visit to the National Shrine, he paused once again at the top of the Shrine’s main stairs to offer a prayer for the benefit of those not permitted inside the church, but who waited patiently nonetheless outside the church, hoping for a glimpse of the pilgrim Pope:

“I leave you now with this prayer: that the Lord Jesus will reveal himself to each one of you, that He will give you the strength to go out and profess that you are Christians, that He will show you that He alone can fill your hearts.”