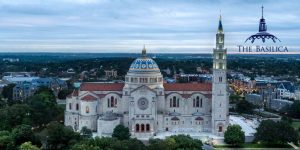 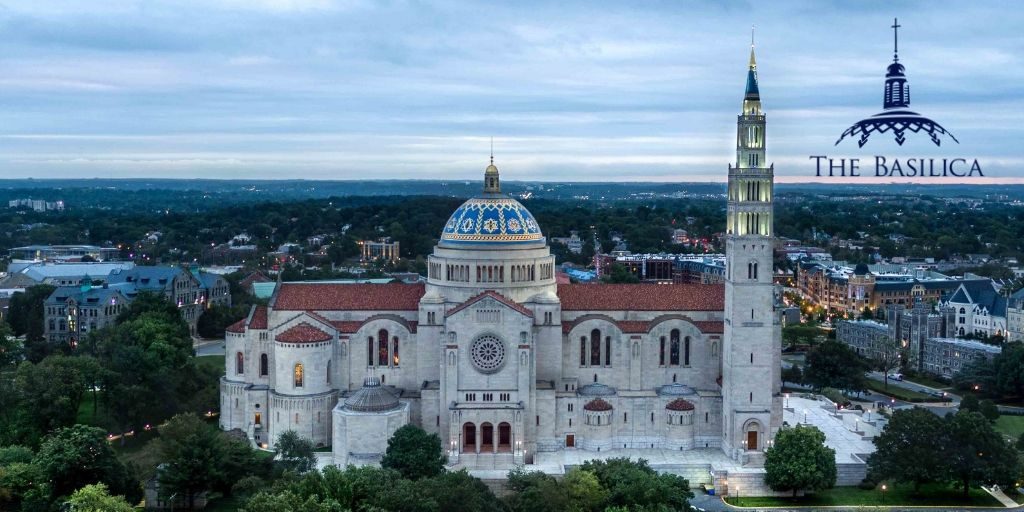 Nearly 60 years ago, the Basilica welcomed a new architectural addition: the Knights Tower, gifted by the members of the Knights of Columbus. Second only to the Washington Monument, the Knights Tower is one of the tallest buildings in the District of Columbia, rising to the staggering height of 329 feet. In 1963, the Knights blessed the Basilica with another gift: their very own carillon. On July 14, 1963, Archbishop O’Boyle consecrated the bells that were to be added to the Knights Tower, and on July 23, the carillon was successfully installed. The carillon’s nine largest bells were dedicated to different saints later that year.

In order to celebrate this special day in history, we had a conversation with the Knights’ Tower Carillonneur, Dr. Robert Grogan. Dr. Grogan currently plays the organ for two weekday morning Masses in the Crypt Church, and performs weekly carillon recitals from the Knights Tower on Sunday afternoons at 2:30 pm.

Dr. Grogan, the carillon and the organ are such unique instruments – what inspired you to learn how to play them?

As a high school student, I happened to be listening to the radio when I heard a program from the University of Kansas in which their school song was being played on the large university carillon. This was very intriguing to me because the harmonics of bells are decidedly not the same as they are for strings and wind instruments. While most instruments have major-third harmonics, there is a minor-third in bell harmonics, so the major triads sounded out-of-tune. Later, as an organ major at the university, I signed up for carillon study, and learned that while some music – especially chordal music in major keys – is not going to sound well on bells, original music for carillon and well-transcribed music for other instruments can be quite musically effective. And, playing the carillon is very good exercise! As for the organ, the first pipe organ I heard was a revelation to me, and I knew that I had to become an organist!

Can you tell us more about the installation of the Knights Tower carillon?

A few years after the tower was built, the bells of the carillon were brought to the Basilica by sea from Annecy, France and installed under the direction of Arthur Bigelow, Bellmaster of Princeton University. While I was not yet the carillonneur for the Basilica, I had just arrived in Washington for graduate study and was present for the dedication and first public performance. Bigelow played the dedicatory recital, including his favorite musical arrangement for carillon, Schubert’s “Moment Musical.”

Can you share any interesting facts that most people wouldn’t know about the carillon?

Since the carillonneur is invisible to the public, except in some ground-level installations, most people probably imagine that playing the carillon is similar to playing the piano or organ, whereas in actuality it is much more physical: the keys are more widely-spaced and are struck by the outside edges of the closed fists (manual keyboard) and by the feet (pedalboard). The action is completely mechanical, with no electrical assistance, so the performer provides all the “power” needed to transmit the downward motion of the keys through the action to the bell clappers, which vary in weight according to the size of the bell. Thus, one works harder to play the heavier bass bells than for the lighter trebles – this is not the case with the piano or organ!

What do you enjoy most about working for the Basilica?

Playing such fine instruments – the carillon bells are outstanding in tonal quality, and the Schudi organ, which I helped design and which I play for Thursday morning Masses in the Crypt Church, has a sound which inspires performer and congregant alike. I also appreciate the freedom I have to perform the type of music I consider the most appropriate for any occasion.

Could you share about a favorite concert or event that you have performed in (organ or carillon)?

Papal visits, for congresses of the Guild of Carillonneurs, the World Carillon Congress, and the American Guild of Organists, as well as for the wedding of a president’s daughter, stand out in memory. But probably my favorite performances – the ones I most enjoy – are the annual carillon recitals before the Christmas Eve Mass.

Do you have any advice for musicians interested in pursuing a similar career?

Always try to musically communicate to your listeners – do your best to choose music which can relate to them, and go beyond the notes to the spirit of the music.

We hope you have enjoyed learning more about Dr. Grogan and the Carillon bells at the Basilica, and we are exceedingly grateful to Dr. Grogan for taking the time to share his story with us! 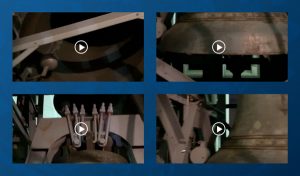 The carillon is composed of 56 bells. Altogether, the combined weight of the bells is 37,150 pounds! If you would like to learn more about the sacred instruments of the Basilica, our website features details and videos of the different instruments.

Experience the Carillon Bells
The Love and Faith of the Grandparents of Jesus: St. Anne and St. Joachim
What Saint Mary Magdalene Teaches Us about Redemption and Devotion