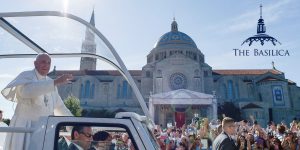 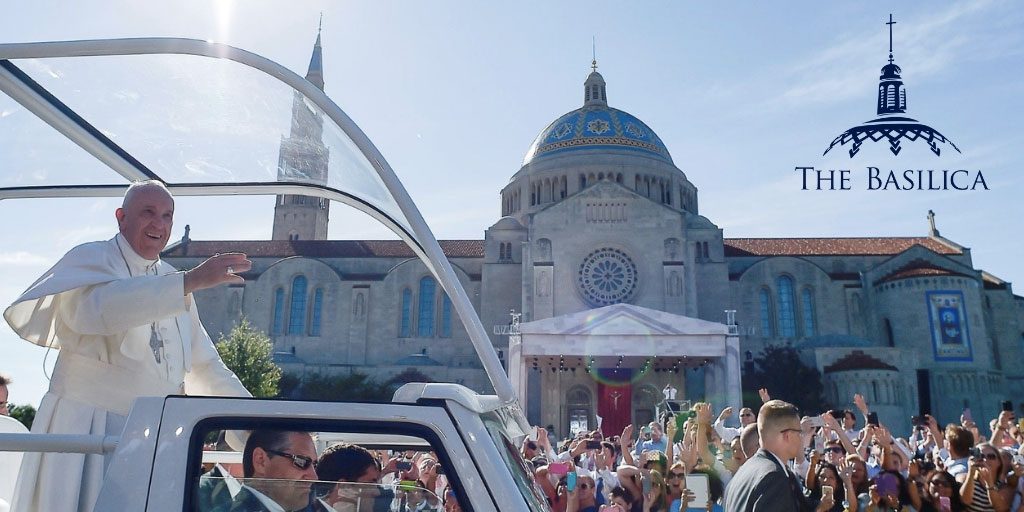 Pope Francis arrived at the Basilica of the National Shrine of the Immaculate Conception on September 23, 2015, a picture perfect day with sunshine, blue skies, and a crowd of 25,000 faithful to greet him. As the Holy Father approached Mary’s Shrine in the Popemobile, the bells of the Knights Carillon rang jubilantly and thousands on the front steps of the Basilica welcomed him. Before entering the National Shrine, Pope Francis drove not once, but twice through the crowd on the Basilica’s East Side where the Canonization Mass of Junípero Serra would later be take place.

Monsignor Walter R. Rossi, Rector of the Basilica, warmly welcomed Pope Francis to Mary’s Shrine and escorted him inside. In the Basilica’s Great Upper Church, thousands of seminarians and novices awaited the Holy Father’s arrival. At first sight of him, they erupted in unbridled exuberance. Simultaneously, the Choir of the Basilica sang “Christus Vincit,” with a musical setting composed expressly for his entrance. The perfectly timed piece ended as Pope Francis ascended the stairs to the sanctuary. From there, the Holy Father blessed all gathered in the Great Upper Church.

Blessing of the Trinity Dome Mosaic

Prior to vesting, Pope Francis blessed the first segment of mosaic art that now adorns the Basilica’s Great Dome, the Trinity Dome. This segment contains the beginning “I believe in one God” and the end “Amen” of the Nicene Creed, the complete text of which will encircle the lower band of the dome.

After vesting, Pope Francis was led in procession from the Great Upper Church out to the Basilica’s East Portico which had been transformed into a beautiful sanctuary for the Canonization Mass of Junípero Serra. A congregation of 25,000 faithful from across the United States, including a contingent of Native Americans from California, filled the East side of the Basilica and the adjacent grounds of The Catholic University of America. Nearly 300 bishops and 1000 priests also gathered to concelebrate the Mass.

The Canonization of Junípero Serra

The large open air Mass began with the first-ever canonization to take place on American soil. Cardinal Donald Wuerl, Archbishop of Washington and Chairman of the National Shrine’s Board of Trustees, accompanied by the postulator and vice postulators of the cause, beseeched the Holy Father to “enroll Blessed Junípero Serra among the Saints.” Pope Francis obliged saying, “we declare and define Blessed Junípero Serra to be a Saint and we enroll him among the Saints, decreeing that he is to be venerated as such by the whole Church.”

Relics of Saint Junípero Serra were placed in a reliquary in the sanctuary and a tapestry of the new saint was displayed on the outer wall of the East Apse of the Basilica for all to see. The image of Saint Junípero Serra was carefully interpreted from a stained glass window that exists within the sacristy of the Basilica’s Great Upper Church. In it, the saint is shown holding Mission San Carlos Borromeo de Carmelo, one of the 11 missions he founded in California, also his final resting place.

The Holy Sacrifice of the Mass

Mass continued following the Canonization Rite with the Liturgy of the Word. While most of the Mass was celebrated in Spanish, the First Reading was read in Chochenyo, a language of Native Americans spoken during the time of Saint Junípero’s missionary work in the territory that is now the state of California; the Second Reading was read in English; and the petitions were read in various languages representative of the diverse composition of the people of the United States of America.

Delivering his homily in Spanish, Pope Francis explained that “Father Serra had a motto which inspired his life and work, not just a saying, but above all a reality which shaped the way he lived: ‘siempre adelante!’ Keep moving forward!” Exhorting the faithful to be like Saint Junípero Serra in spreading the good news, the Holy Father exclaimed, “Forward! Let’s keep moving forward!”

Following his rousing homily, Pope Francis reverently celebrated the Liturgy of the Eucharist, the source and summit of the Christian life and the height of his visit to the National Shrine. After Communion, he prayed, “May the mysteries we have received, O Lord, prepare us for the eternal joys that, as a faithful steward, Saint Junípero Serra came to deserve.”

The Holy Father concluded the Mass with a Pontifical Blessing over the people. With the choir and congregation boldly singing the recessional hymn “Holy God We Praise Thy Name,” Pope Francis reverenced the altar, departed the sanctuary, and returned to the sacristy of the Great Upper Church where he would prepare to take leave of the National Shrine.

Exiting the Basilica through the West front entrance, Pope Francis smiled and waved at the still enthusiastic and adoring crowd. From the back of his little black Fiat, the Holy Father bid the faithful a fond farewell as the sun set over Mary’s Shrine on what was truly an historic and blessed day.