Art & Architecture of the Basilica

The Basilica of the National Shrine of the Immaculate Conception is the largest Roman Catholic church in North America and is among the ten largest churches in the world. With its unique blend of Romanesque-Byzantine architecture and sacred art, it is neither imitative or duplicative of any other sanctuary on earth.

Sacred Art of the Basilica

The Basilica of the National Shrine of the Immaculate Conception contains the world’s largest collection of contemporary ecclesiastical art.

The artistic embellishment of the Basilica, both inside and out, is in keeping with the Romanesque-Byzantine style of its architecture.

Romanesque art is very enthusiastic in its use of figurative or stone sculpting.  The exterior of the Basilica contains both heroic size figures of saints and finely sculpted tympana and archways.  Tympana sculpted in relief ornament the interior east and west entrances and various niches in the nave and chancel areas.  Stained and faceted glass windows decorate both the Upper and Lower Church areas.

Byzantine art is remarkable in its use of mosaic and marble.  Above the spring line, this includes the mosaic ornamentation of seven main domes along with the many side chapels and oratories.  Below the spring line, the church is adorned with beautiful marble claddings.  The finer marbles open out allowing the marble veining to form symmetrical patterns.

The brilliant mosaics, stained glass windows, and polished stone carvings throughout the Basilica and in its more than 80 chapels and oratories, express the reality of God dwelling within us. 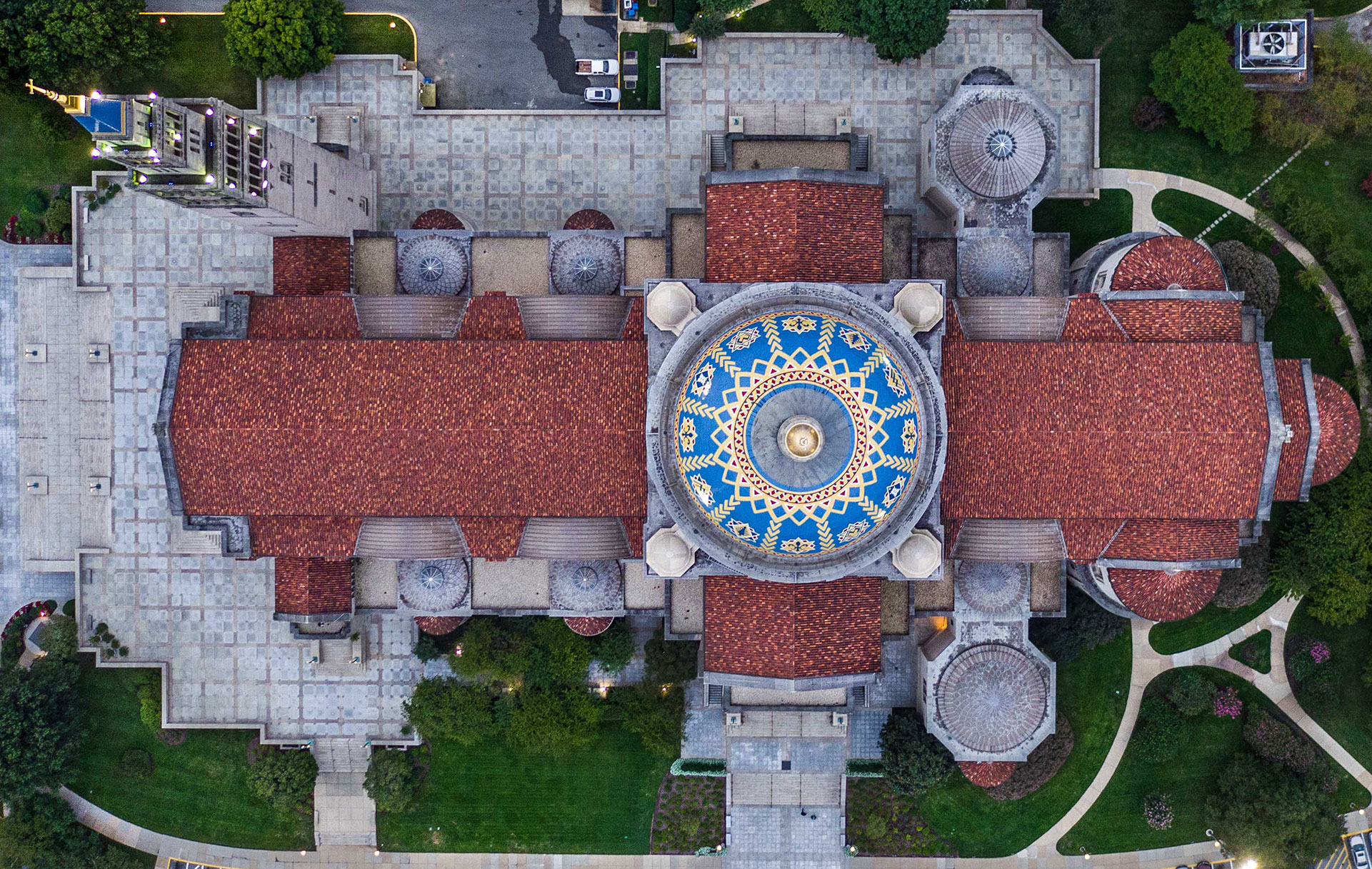 Discover more about the Architecture of the Basilica

Learn more about the unique architecture of the Basilica

Architecture of the Basilica

The Basilica of the National Shrine of the Immaculate Conception is unlike any other church in the world.

To achieve an original design that was “sunk in tradition yet distinctively American,” architects chose a Romanesque-Byzantine style for a national Catholic monument to symbolize the faith and love of the United States for its patroness, the Blessed Virgin Mary under her title of the Immaculate Conception.

The Romanesque-Byzantine style was chosen for the National Shrine to permit the building of the exterior at one time and the interior at another; to harmonize with the architecture of Washington, DC; and to be distinct from the Washington National Cathedral, the Gothic Episcopalian cathedral whose construction was underway at the time.

Today, the Basilica of the National Shrine of the Immaculate Conception is the largest Roman Catholic church in North America, and it is among the ten largest churches in the world. It is constructed entirely of stone, brick, tile and mortar—without structural steel beams, framework or columns.

Explore the Basilica with Our Interactive Map

View each point of interest with our interactive map, exploring the art and architecture throughout the Crypt Level, Upper Church Level, and exterior gardens.

Take a Virtual Tour of the National Shrine

Journey through the Basilica with a virtual tour of its unique art, domes, apses, chapels, and more.

Plan your Visit to the Basilica

Experience the Basilica in person, exploring its chapels and gardens though a guided tour.