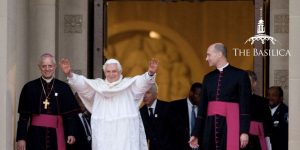 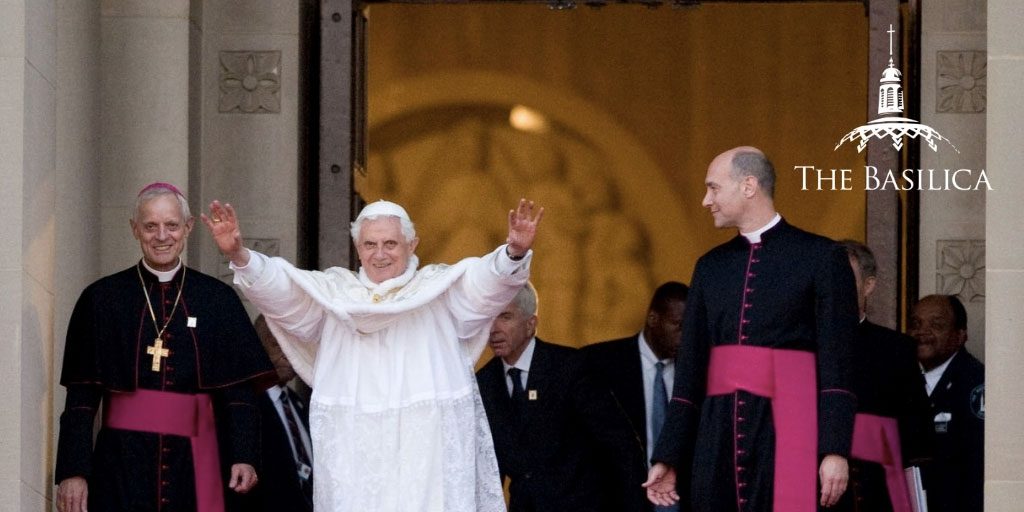 People of all ages, states, and walks of life from across America flocked to the nation’s patronal church awaiting the arrival of the Successor of Peter, His Holiness Pope Benedict XVI. Patiently standing for hours, they prayed the rosary and sang songs led by Dominican priests and brothers, held signs, waved papal flags, and chanted “Holy Father!” as they eagerly awaited the Vicar of Christ.

At 5:30 p.m., flanked by a massive contingent of security, the popemobile departed the headquarters of the United States Conference of Catholic Bishops and entered onto Fourth Street. Upon arriving at the Basilica’s east side, Pope Benedict XVI was immediately greeted with thunderous applause and loud, joyful cries of “Viva il Papa!” As he exited the popemobile, he acknowledged the crowd with open arms.

Monsignor Rossi kissed the Holy Father’s ring welcoming him to the Basilica.  Then, entering the Great Upper Church, Pope Benedict XVI was met with the exuberant roar of the indoor assembly. Ready to greet him were the Basilica’s sacristan sisters who presented him with gifts—a bouquet of fresh flowers, the book America’s Catholic Church, and a new zucchetto that he would don when vesting for Evening Prayer, leaving the one he arrived wearing as a keepsake to the Basilica.

While in the Great Upper Church, Pope Benedict XVI blessed the crowd, then spent moments in prayer in the Blessed Sacrament Chapel.  Continuing on, he visited the Basilica’s Oratory of Our Lady of Altötting where he knelt and prayed. A gift to the Basilica from the Shrine of Our Lady of Altötting and the people of Germany, this encased statue of the Blessed Mother is the only exact copy on display outside of Bavaria, Pope Benedict XVI’s homeland.

From there Pope Benedict XVI descended to the Crypt Church Sacristy where he vested for Solemn Vespers, wearing a century-old cope donated to the National Shrine in the 1920s and restored for the Holy Father by Sr. Lucyna Chabera, a sacristan and seamstress of the Basilica, who also made a matching stole.

Entering the Crypt Church, the Holy Father was received with great joy by his brother bishops. He presided over Evening Prayer, most of it sung, led by the Choir of the Basilica.

Following Solemn Vespers, Cardinal Francis George, Archbishop of Chicago and President of the United States Conference of Catholic Bishops, thanked Pope Benedict XVI for his pastoral visit and presented him with a gift for his birthday—a check in the amount of $870,000. An offering from the bishops and faithful from dioceses across the United States, the gift was given in honor of the Holy Father’s life and ministry to assist in his charitable works around the world.

Pope Benedict XVI presented gifts as well. He bestowed upon the Shrine “a Golden Rose for our Mother Mary” which Monsignor Rossi graciously received on the Basilica’s behalf. The Holy Father then presented a silver chalice to Archbishop Alfred E. Hughes of New Orleans as a sign of “prayerful solidarity with the faithful of the Archdiocese” in the wake of Hurricane Katrina.

Closing his meeting with the Bishops of the United States, Pope Benedict XVI imparted a final blessing. As he took leave of the Crypt Church, his brother bishops stood, applauded and sang “Happy Birthday” to their departing pastor.