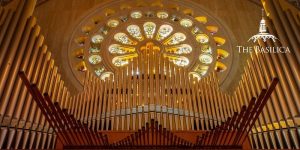 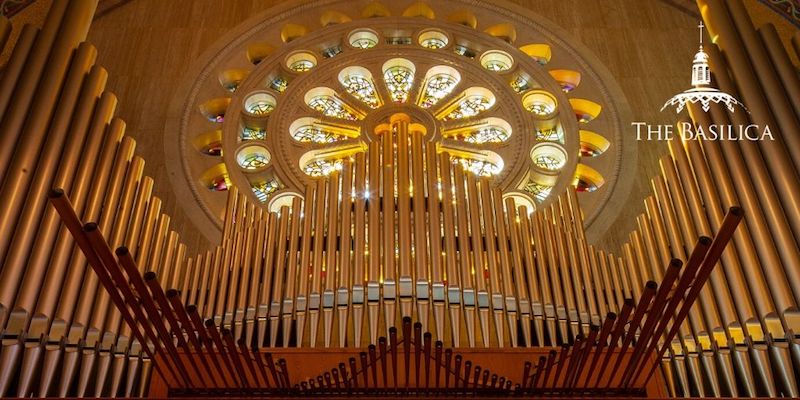 The organs of the Basilica bring dignity and majesty to worship, leading thousands in prayer and praise. Three Möller organs grace the Great Upper Church and the distinctive Schudi organ abides in the Crypt Church. Learn more about these four instruments that allow the Basilica organists to present a rich variety of music as they worship the Lord through song.

History of the Basilica Organs

The current organs of the Basilica were preceded by a variety of other organs. The first organ was installed in 1927, in the Crypt Church. It was a two-manual organ, created by The Hall Organ Company of West Haven, Connecticut. Seven years later, in 1934, a four-manual “Vox Organo” was installed, and organist Firmin Swinnen played for its debut. In 1959, a Baldwin Electronic organ was played at the dedication of the Great Upper Church, as the Möller organs were not yet completed.

The Möller Organs of the Great Upper Church

April 25, 1965, marked the dedication of the Möller organs in the Great Upper Church. A gift of the Archbishop of New York, Francis Cardinal Spellman, as well as the Catholic Chaplains, the instruments combine different traditions of organ building to create a magnificent sound in the Great Upper Church. The South Gallery organ has 6,751 pipes and 124 ranks, while the West Chancel organ has 2,642 pipes and 48 ranks. (That makes a grand total of 9,393 pipes, in case you were wondering!) They range in length from one inch to 37 feet.

In 1984, another smaller Möller organ was temporarily installed in the Crypt Church while the Schudi organ was being constructed. It was later moved to the Blessed Sacrament Chapel. With two manuals and 188 pipes, it provides music for smaller liturgies and special occasions with the choir.

The Schudi organ of the Crypt Church was dedicated on November 20, 1987. Requiring over 7,000 hours of labor, this unique instrument was built according to a Baroque design by Gottfried Silbermann, who was a friend of J.S. Bach. A two-manual organ with 1,355 pipes, it features a white oak case typical of 18th century instruments. The center tower of the organ is topped with a cockleshell corbel, which echoes the design of the Crypt Church altar, and is a symbol of pilgrimage. At the base of the corbel is a fleur-de-lis, symbolizing Mary. The dedicatory plaque carries the inscription Soli Deo Gloria, a phrase Bach inscribed on many of his compositions, meaning “Glory to God alone.”

Curious about the specifications of the Basilica organs? Learn more.

Learn more about the instruments of the Basilica 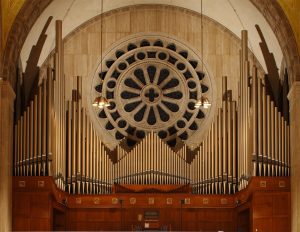 Resounding our praise to God from whom all blessings flow, the instruments of the Basilica add dignity and majesty to the liturgy. Learn more about the organs and discover the carillon – calling the faithful to prayer and announcing significant events in the life of the Church.

Find out more
The Music of the Easter Season: Adapting to the Challenges of Coronavirus
Victory and New Life: The Glorious Mysteries