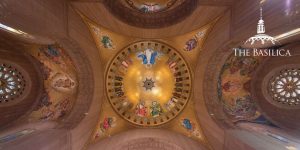 On December 8, 2017, the Solemnity of the Immaculate Conception and the patronal feast day of the National Shrine and of our nation, Monsignor Walter Rossi, Rector of the Basilica, welcomed a standing room only congregation of more than 5,000 of the faithful to perhaps the most momentous occasion in the history of America’s Catholic Church.

“As we give glory to God this day for the gift of the Blessed Virgin Mary,” Monsignor Rossi said, “we also raise our eyes to the heavens as we dedicate the crowning jewel of Mary’s Shrine, the Trinity Dome. This magnificent mosaic brings to completion the building of the National Shrine begun 97 years ago when the foundation stone was placed on September 23, 1920.”

So historic was the day that His Holiness, Pope Francis, dispatched from the Vatican Cardinal Kevin J. Farrell, Prefect of the Dicastery for the Laity, Family and Life, as his Extraordinary Envoy to the celebration.

Cardinal Farrell delivered the words of Pope Francis: “With joy in our heart, we received the news that the construction of the renowned Basilica of the National Shrine of the Immaculate Conception of the Blessed Virgin Mary in Washington will be brought to completion in solemn manner on December 8. For on that day, the dome devoted to the Most Holy Trinity will be dedicated, together with its grand mosaic work, part of which we blessed on September 23, 2015,” referring to the day Pope Francis visited the National Shrine for the canonization of St. Junípero Serra during which he blessed the first segment of mosaic fabricated for the dome containing the words of the beginning and end of the Nicene Creed: “I believe” and “Amen”.

In addition to expressing the Holy Father’s love for all pilgrims to Mary’s Shrine, Cardinal Farrell announced that Pope Francis imparted an Apostolic Blessing upon all who participated in the celebration of Mass and the dedication of the Trinity Dome.

Cardinal Donald W. Wuerl, Archbishop of Washington and Chairman of the National Shrine’s Board of Trustees, was the principal celebrant and homilist of the historic Mass. Echoing the sentiments of the Holy Father and of Monsignor Rossi, Cardinal Wuerl poignantly intimated, “What today we celebrate, dedicate and consign to the ages to come is the completion of the Basilica represented in the adornment of the entire interior of the great dome with millions of pieces of colored tile culminating in the presentation of Mary with the title of her Immaculate Conception under the radiant image of the Triune God, Father, Son and Holy Spirit.”

As with the dome, Cardinal Wuerl said, “When we see the myriad tiles in so much color coming together to realize this extraordinary work of art, we are reminded that in the pews of this National Shrine, our Nation’s Marian House, we see a similar phenomenon in living stone – the living members who make up the Body of Christ. On any given Sunday or Solemnity, such as today, all we have to do is look out across the thousands of people gathered for Mass and see the face of world…we look across this great Church of God and see out of so many one great faith family. We have come to be one in proclamation of faith, experience of redemption in the Eucharist, and communion as one Church in God’s Holy Spirit.”

Concluding his homily and prefacing the solemn blessing and dedication of the Trinity Dome, Cardinal Wuerl said, “May we always look to this great majestic dome mindful of our prayer to Mary the Immaculately Conceived Mother of God that she will always intercede for us so that strong in faith, renewed in hope and committed in love, we might always sing in the silence of our hearts or with the joy of our voices: “Oh, most Holy Trinity, Undivided Unity; Holy God, Mighty God. God Immortal, be adored.”

Following the blessing and dedication of the Trinity Dome, Monsignor Rossi had the monumental task of acknowledging all who contributed to this historic crowning achievement in the life of Mary’s Shrine.

“The Trinity Dome was collaboration at its best,” he said, “and it took many hands to make this a reality.” He humbly continued, “There is no way to sufficiently thank all those who were involved, so I simply say thank you. Please know that it comes with the utmost gratitude.”

Monsignor Rossi expressed special thanksgiving to Cardinal Wuerl saying, “if it were not for his support, guidance, enthusiasm, and interest, we would not be here today. Cardinal Wuerl has been intricately involved in every step of the Trinity Dome project, and, Your Eminence, as your Episcopal motto declares, ‘Thy Kingdom Come.’ Thank you for enhancing this part of God’s kingdom with your care.”

With particular gratitude, Monsignor Rossi also said, “I thank God and all those who worked on the Trinity Dome that during the entire process we did not have any structural damage to the Shrine and not one individual was hurt.”

“Finally and most importantly,” Monsignor Rossi said, “I thank all of our generous benefactors – each and every person throughout the United States who contributed to the Trinity Dome. This crowning jewel of Mary’s Shrine is your work, your gift to Our Blessed Mother.”

Then, directing everyone’s gaze to a window sill east of the Blessed Virgin Mary in the Trinity Dome, Monsignor Rossi revealed that a section of mosaic there reads: “Please pray for the Benefactors of the Trinity Dome.” He said, “I could not think of a better way to acknowledge the contribution of so many throughout the country than to have you become a physical part of this building and ask that you each be prayed for until the end of time.”

As he closed, Monsignor Rossi fervently prayed, “May God bless you and Mary Immaculate intercede for all of your needs!”

View the historic Mass and Dedication of the Trinity Dome.

A Moment in Basilica History: First Mass Celebrated in the Crypt Church 95 Years Ago
Dedication of Rosary Walk and Garden