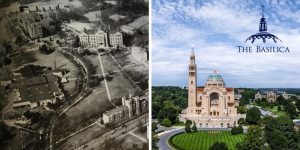 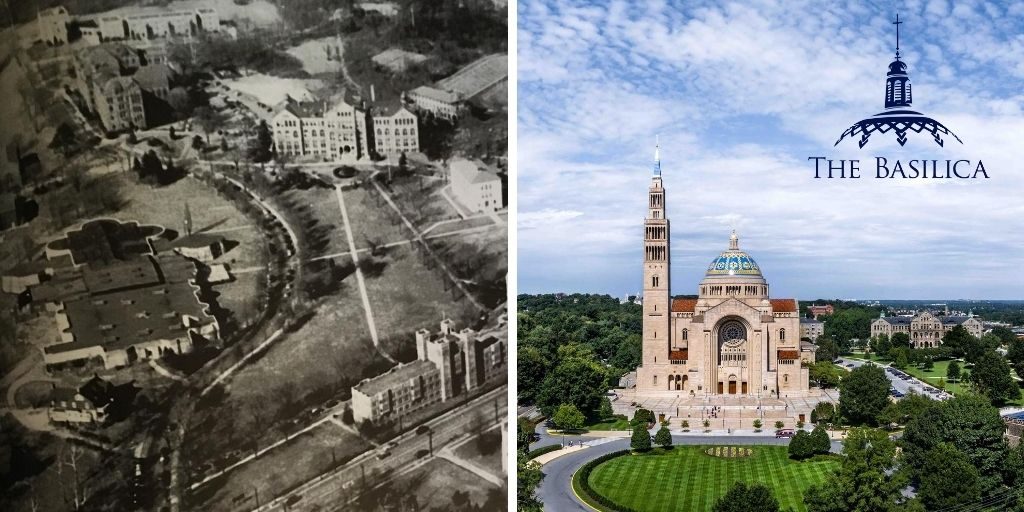 Built by generations of faithful American Catholics to honor the patroness of our nation, the Basilica of the National Shrine of the Immaculate Conception has been 100 years in the making. As we approach our centennial in September, we’re taking a look back at the construction process of the National Shrine and the completed spaces today.

North Apse of the Crypt Church

On October 4, 1923, workers carried a bronze and wood crucifix from Caldwell Hall of Catholic University and placed it in what would later be the Christ the Good Shepherd Chapel. The crucifix was then moved to mark each construction goal as it was completed. Today, the finished north apse contains five distinct chapels with glimmering mosaics, as well as unique pewabic tile details.

During the summer of 1924, workers used plows and tractors to excavate the area that is now the Hall of American Saints, housing marble statues of St. Elizabeth Seton, St. Frances Cabrini, and St. Kateri Tekakwitha.

Exterior of the National Shrine

Workers stand in front of the limestone walls of the crypt level of the National Shrine in 1924, a great contrast to the completed and landscaped Basilica of today.

The marbled pillars of the Crypt Church Sacristy in February 1925 frame a view of the grounds during construction. In 1996, a stained-glass depiction of Jesus Teaching by the Sea was installed in the sacristy entryway.

The Ladies Auxiliary to the Ancient Order of Hibernians donated the St. Brigid of Ireland Chapel in tribute to the nuns of the battlefield that served during the war. They are pictured on the left at its dedication in 1927, while on the right is the chapel today. 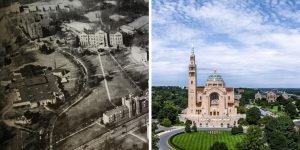 Aerial View of the National Shrine

This aerial view from the 1930s shows the completed crypt level of the church, with construction halted due to the death of Bishop Shahan and the Great Depression. Construction was renewed in 1954 thanks in large part to the efforts of Archbishop John Noll.

The unveiling of the Mary Mother of Mankind statue took place on May 8, 1937. Pictured left to right are: Bishop Joseph M. Corrigan, Rector of CUA; Mrs. Patricia Donohue, wife of the sculptor, who served as the model for the statue; Mrs. Marable Brennan, donor; Most Reverend Michael J. Curley, Archbishop of Baltimore; Harry Eversfield Donohue, sculptor; the Honorable Judge Brennan; and Monsignor David T. Dwyer, the second director of the National Shrine. The statue remains a focal point in Memorial Hall today. 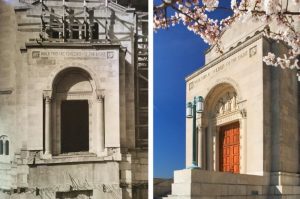 On the left is the east narthex entrance during construction, prior to the installation of the relief The Sixth Provincial Council at Baltimore 1846 by sculptor John Angel. This tympanum commemorates the occasion when Mary was named the patroness of the United States under her title of the Immaculate Conception. This entrance is now surrounded by cherry trees that burst into glorious flower in the spring. 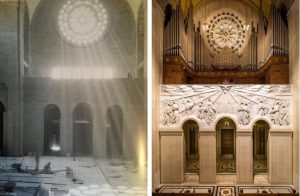 Rear of the Great Upper Church

During the construction of the Great Upper Church in 1958, radiant heat coils were placed and workers had begun to install the marble floor. The right photo shows the Möeller organ, which was added in 1965, and the Universal Call to Holiness relief, which was installed in 1999. 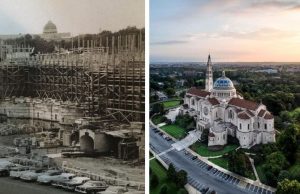 In February of 1956, workers began installing the marble columns of the Great Upper Church apses, made of Botticino marble from Italy. Each segment of the 50-foot columns weighed 12.5 tons. Throughout the next few years, the limestone walls slowly rose, and the structure of the Great Upper Church was dedicated in 1959. Today, the Basilica stands as a tribute to the faithful support of American Catholics that helped bring it to completion.