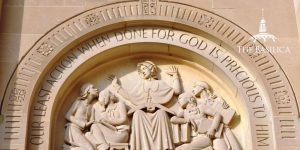 On January 4, we celebrate the Memorial of Saint Elizabeth Ann Seton. Elizabeth Ann Seton was the ​first American​ to be canonized as a saint and is best known for her role in starting children’s parochial education in America. ​

Born on August 28, 1774, on Staten Island, Elizabeth was originally raised in the Episcopalian church. When she was 20 years old, she married a wealthy merchant named William Seton. Together, Elizabeth and William had four children. Ten years into their marriage, however, they were forced to declare bankruptcy after William’s business was struck with unexpected financial misfortune. Likely under the financial strain, William fell ill, and the Setons decided to move to Italy in hopes of improving his health. Unfortunately, William did not improve, and passed away from tuberculosis in 1803.

After spending time in Italy, Elizabeth was struck by the beauty of Catholicism and converted in 1805. Many of her friends and family did not receive this development well, and some even shunned her following her conversion. Looking for new purpose, Elizabeth later started a Catholic school for girls in Baltimore, Maryland, at the request of a priest.

The Mother of Parochial Schools in America

Elizabeth was also a very expressive individual – writing spiritual essays, hymn lyrics, and composing music. Near the end of her life, Elizabeth wrote a beautiful statement of faith:

Link by link, the blessed chain
The Body of Christ – He the head, we the members
One Spirit diffused thru’ the Holy Ghost in us all
One Hope – Him in Heaven and Eternity
One Faith – By his Word and his Church
One baptism and participation of his sacraments
One God our dear Lord
One Father, we his children – above all through all and in all
Who can resist, all self must be killed and destroyed by this artillery of love – one, one, one. Who could escape this bond of unity, peace, and love? Oh my soul, be fastened link by link, strong as death, iron, and Hell as says the Sacred Word.

Elizabeth’s devotion to educating children and caring for the less fortunate has had an impact lasting well beyond her own life. She was canonized by Pope Paul VI in 1975.

Saint Elizabeth Ann Seton is depicted on the exterior tympana of the West Façade, the Hall of American Saints, Miraculous Medal Chapel window, Our Lady of Guadalupe Chapel, and the Trinity Dome Mosaic.