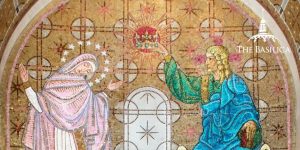 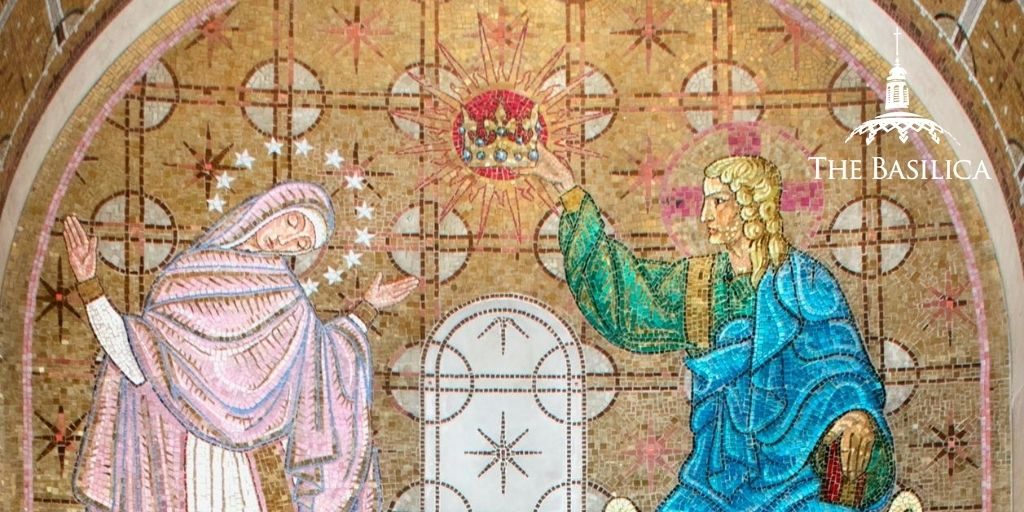 May the Virgin Mary, crowned Queen, intercede for us… that we [may] imitate her in faithfully fulfilling God’s will on earth, to join her one day in the heavenly Jerusalem. In every situation of our life, let us invoke her with trust: “Queen of all saints, pray for us!”
– Pope John Paul II

This year on August 22, we celebrate the Memorial of the Queenship of Mary, honoring Mary’s queenship over heaven and earth. Here at the Basilica, Mary is portrayed as Queen of the Universe, Queen of Missions, Queen of Ireland, Queen of All Hearts, Queen of Peace, and more throughout our sacred art and architecture.

Why We Honor Mary as Queen

The Memorial of the Queenship of Mary was first instituted in 1954 by Pope Pius XII. According to Catholic tradition, as Christ is king of the world and saves the people from their sins, Mary is queen over the earth because of her role in the story of divine redemption, serving as mother to the Savior. Pope Benedict XVI described this relationship, saying:

The small and simple young girl of Nazareth became Queen of the world! This is one of the marvels that reveal God’s Heart. Of course, Mary’s queenship is totally relative to Christ’s kingship. He is the Lord whom after the humiliation of death on the Cross the Father exalted above any other creature in Heaven and on earth and under the earth (cf. Phil 2: 9-11). Through a design of grace, the Immaculate Mother was fully associated with the mystery of the Son: in his Incarnation; in his earthly life, at first hidden at Nazareth and then manifested in the messianic ministry; in his Passion and death; and finally, in the glory of his Resurrection and Ascension into Heaven.

How Mary Serves as Queen

Mary… is Queen in her service to God for humanity, she is a Queen of love who lives the gift of herself to God so as to enter into the plan of man’s salvation. She answered the Angel: “Behold, I am the handmaid of the Lord” (cf. Lk 1:38) and in the Magnificat she sings: God has regarded the low estate of his handmaiden (cf. Lk 1:48). She helps us. She is Queen precisely by loving us, by helping us in our every need; she is our sister, a humble handmaid. 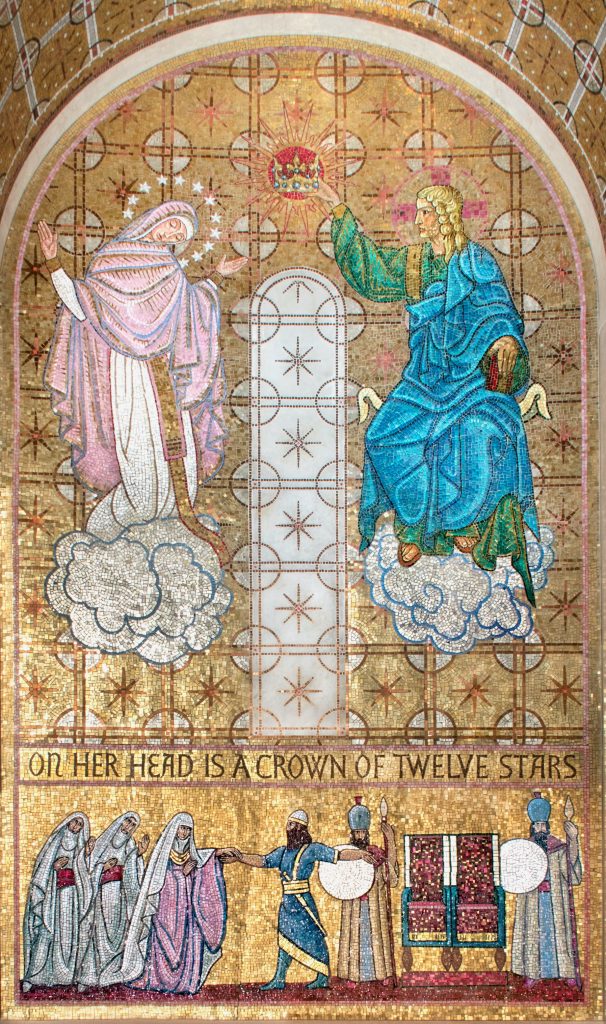 Mary’s Coronation Depicted in the Basilica

Mary’s Coronation specifically is portrayed in the Basilica in mosaic tile in the Rosary Walk and Garden, as well as the Coronation Chapel in the Great Upper Church. In the Coronation Chapel, Jesus is depicted as the King of Kings, honoring his mother Mary by seating her on a throne next to him and giving her a heavenly crown. Encircling her head are the twelve stars which symbolize the twelve tribes of Israel. Beneath the depiction of Mary and Jesus is the Old Testament parallel to Mary’s Coronation: Bathsheba receiving honor from her son, King Solomon, as he seats her next to him on his throne (1 King 2:19). The two panels are joined by the text from Revelation: “On her head is a crown of twelve stars (12:1).

Prayer to Mary, Our Mother and Queen

As we honor the Queenship of the Blessed Mother, let us reflect on the following prayer honoring Mary as Queen:

[L]et us as children of the Church above all renew our devotion to the One whom Jesus bequeathed to us as Mother and Queen. Let us entrust to her intercession the daily prayer for peace, especially in places where the senseless logic of violence is most ferocious; so that all people may be convinced that in this world we must help each other, as brothers and sisters, to build the civilization of love. Maria, Regina pacis, ora pro nobis!