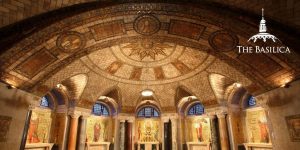 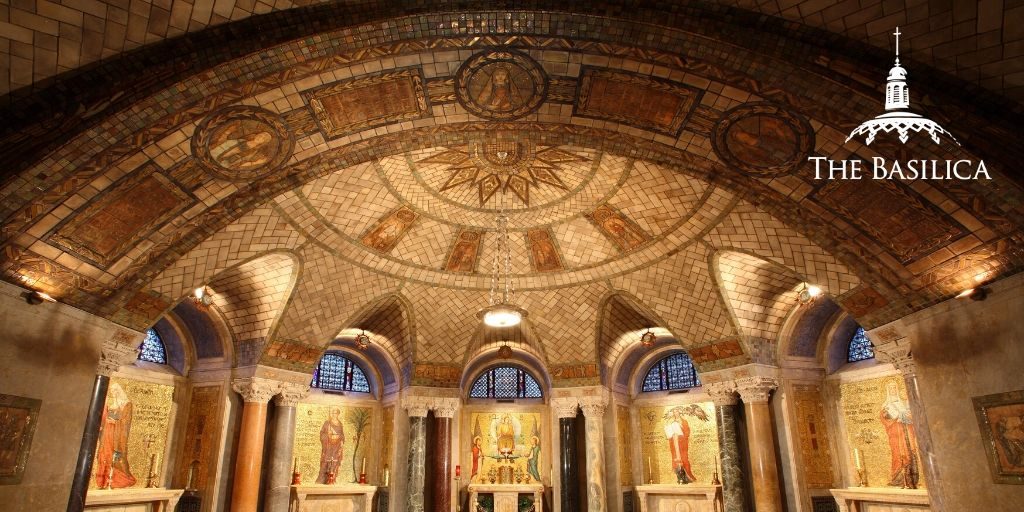 The name Mary Chase Stratton may not be familiar to most American Catholics, but her indelible mark on sacred art can be seen all over “America’s Catholic Church.” Interspersed throughout the Crypt Church, her signature tiling and glazing techniques bring the depictions of saints and scriptural figures to life in a way unlike any other architectural art.

Mary Chase Perry Stratton was best known for her development of iridescent glazes, which won her national acclaim in the art of pottery and architectural installations. The Detroit Michigan native is credited with creating the Pewabic (Peh-wäh-bic) ceramic tile technique. The term Pewabic comes from the Chippewa Indian word for “iron.” Stratton once remarked that “Pewabic means ‘clay with a copper color,’ in the Chippewa language, the same as Alhambra in Spanish.” The secret of her Pewabic technique was never revealed and remains a mystery to this day.

The Basilica is the only structure in the world to combine Pewabic ceramics with Guastavino vaulting, a structural method of building which achieved remarkable strength through the use of Guastavino’s secret mortar and layers of staggered tiles. The Guastavino technique is most apparent in the Basilica’s Crypt Church, which contains approximately 35,000 visible tiles. The soft earth tones of the Woburn stone, arranged in the signature Guastavino herringbone pattern, provide the ideal background for the Pewabic ceramic tiles, rondels, and friezes interspersed throughout the ceiling.

The combination of Pewabic ceramics and Guastavino vaulting came about with the decision to use St. Genevieve marble wainscoting on the walls of the Crypt Church. Charles D. Maginnis and Fr. Bernard A. McKenna, personal secretary to Bishop Shahan, at the suggestion of Mary Chase Stratton, decided to “tie the gray and goldish streaks of that marble” to the Guastavino ceiling by intersecting the arches with Pewabic ceramics.

Stratton’s Art in The Crypt Church

Pewabic rondels ornament the ceiling of each apse according to its theme. The west apse features scriptural figures who were part of prophecies: Deborah, Miriam, and Ruth. The north apse focuses on the theme of promise, showing depictions of Elizabeth, Mary, and Anne. The east apse reflects the gift of fulfillment, portraying Peter, Salve Regina, and Paul.

The designs on each of the small square ceramic border tiles, the ceiling panels and rondels, and the capstones duplicate distinctive symbols and images found in the Roman catacombs. Particularly noteworthy are those of the Eucharist in the north apse. Each dome spans 65 feet across diagonally! At the intersection of each arch is a ceramic embellishment by Stratton: the ceramic ornament above the main altar, God the Holy Spirit; that above the nave, God the Father; and the panel between the main altar and the nave, Verbum caro factum est (The Word became flesh) or God the Son. The three installations are adaptations from La Disputa (1509-10) by Raphael, a fresco in the Apostolic Palace of the Vatican. 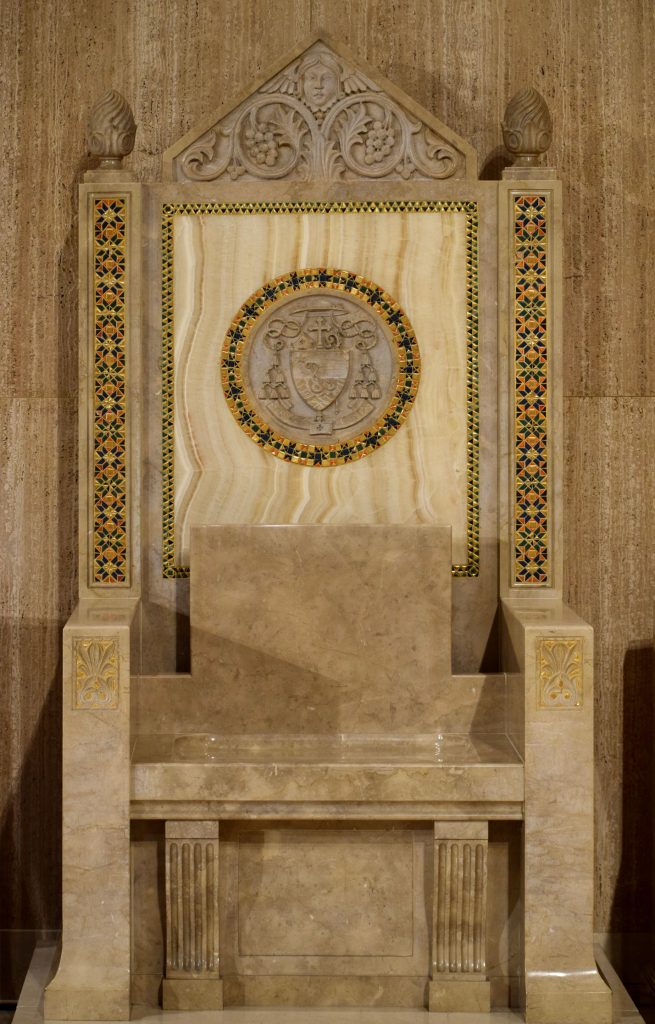 The Crypt Church and the fourteen Stations of the Cross were Stratton’s largest commission, taking almost seven years to complete.

Mary Chase Stratton also designed the Pewabic ceramic tiles which are inlaid in the episcopal throne residing in the Upper Church. Originally, the throne was located in the Crypt Church, but was moved to its present location in 1961. Fashioned of Botticino marble, the back of the chair is ornamented with the crest of Bishop Thomas J. Shahan. This was a personal gift of the bishops of the United States to Bishop Shahan in 1932, in honor of his golden jubilee as a priest.