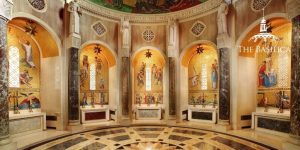 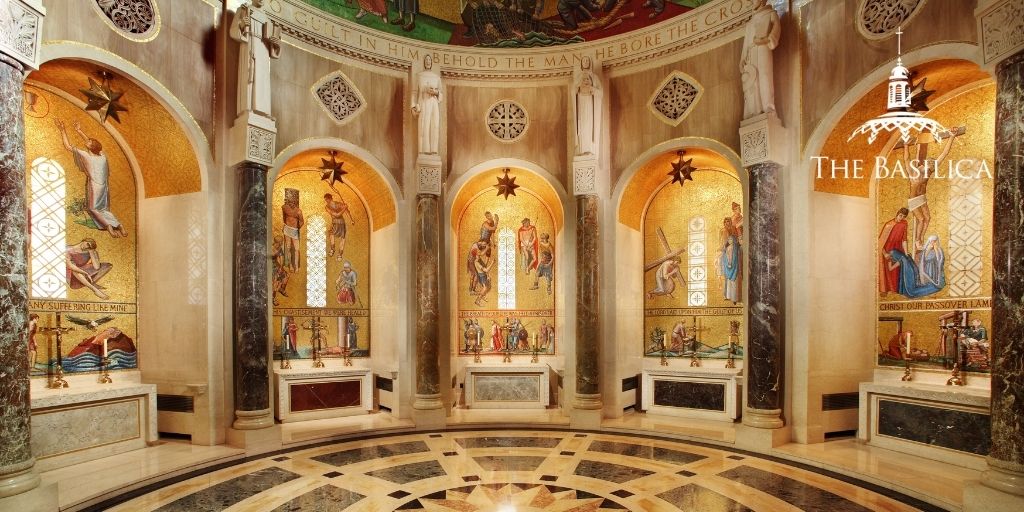 As we celebrate Christ’s resurrection this Easter, we are delighted to announce an all-new virtual tour focusing on where the life, death, and resurrection of Christ are honored in the Basilica! Admire the glittering mosaics of the Glorious Mysteries Chapels, gaze up in wonder at the stunning Incarnation Dome, bask in the quiet beauty of the Ave Maria Chapel, and more with these stunning panoramic views.

The first dome in the path to the Christ in Majesty mosaic, the Incarnation Dome spans 3,780 square feet and divides into four quadrants depicting the Annunciation, the Nativity, the Wedding Feast at Cana, and the Transfiguration. Its four pendentives portray Jeremiah, Isaiah, the Matriarch Sarah, and the Prophet Micah, and the base of the dome is encircled with the passage: “The Word was made flesh and dwelt among us. And we saw his glory – glory as of the only Begotten of the Father, full of grace and truth.” (John 1:14)

The second dome on the path to the Christ in Majesty mosaic, the Redemption Dome is the exact size of the Incarnation Dome and splits into four quadrants which depict four redemptive acts of Christ: the Temptation in the Desert, the Crucifixion, the Descent into Hell, and the Resurrection from the Dead. The four pendentives portray significant persons from these biblical accounts: Lazarus, Simon of Cyrene, Joseph of Arimathea, and Mary Magdalene. The base of the dome is encircled with the passage: “Worthy are you to receive the scroll and to break open its seals, for you were slain and with your blood you purchased for God those from every tribe and tongue, people and nation.” (Revelation 5:9)

The Luminous Mysteries, also referred to as the Mysteries of Light, demonstrate the light of God manifested through Jesus, highlighting key aspects of Jesus’ ministry and life on earth. They are depicted in the Rosary Walk and Garden and the Our Lady of Pompei Chapel at the Basilica, and include Jesus’ Baptism in the Jordan, the Wedding at Cana, the Proclamation of the Kingdom of God, the Transfiguration, and the Institution of the Eucharist. You can find them portrayed in the Our Lady of Pompei Chapel below.

The Sorrowful Mysteries provide the opportunity to meditate on the events leading up to Christ’s death. Each of these mysteries has a parallel in the Old Testament, illuminating the cohesiveness of Scripture throughout the ages. The Sorrowful Mysteries include the Agony in the Garden, the Scourging at the Pillar, the Crowning with Thorns, the Carrying of the Cross, and the Crucifixion. You can see where they are portrayed in the Great Upper Church below!

The final mysteries of the Rosary are the Glorious Mysteries, which celebrate Christ’s triumph over sin and death, rejoicing in the new life that we have been given. These mysteries include the Resurrection, the Ascension, the Descent of the Holy Spirit, the Assumption of Mary, and the Coronation of Mary. Like the Joyful and Sorrowful Mysteries, the portrayals of the Glorious Mysteries in the Great Upper Church show each mystery alongside its Old Testament parallel.

Depicting the life and death of Christ and the sacraments of confirmation and baptism through a mosaic comprised of 100 shades of variegated gold, the Blessed Sacrament Chapel creates an atmosphere of contemplation and reverence. It is no wonder that upon visiting the Basilica, Popes John Paul II, Benedict XVI, and Francis each began with silent prayer in this chapel. While the dome above centers on the scene of the crucifixion, other surrounding figures represent a universal offertory procession. The pendentives depict the Lord’s Supper, the Miracle of the Loaves and Fishes, baptism on Holy Saturday, and confirmation.

The Ave Maria Chapel, also called the “Founder’s Chapel,” features a crucifix set with seven mystical roses, symbols for Mary, as well as a circle inset with a square, symbolizing eternity and the temporal world. It is marked with the Greek word nika, meaning “victor” and Greek letters IC-XC, signifying Jesus Christ.

Where is Jesus mentioned in the Old Testament?
Birds in the Bible and Sacred Art