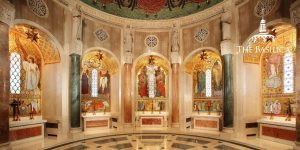 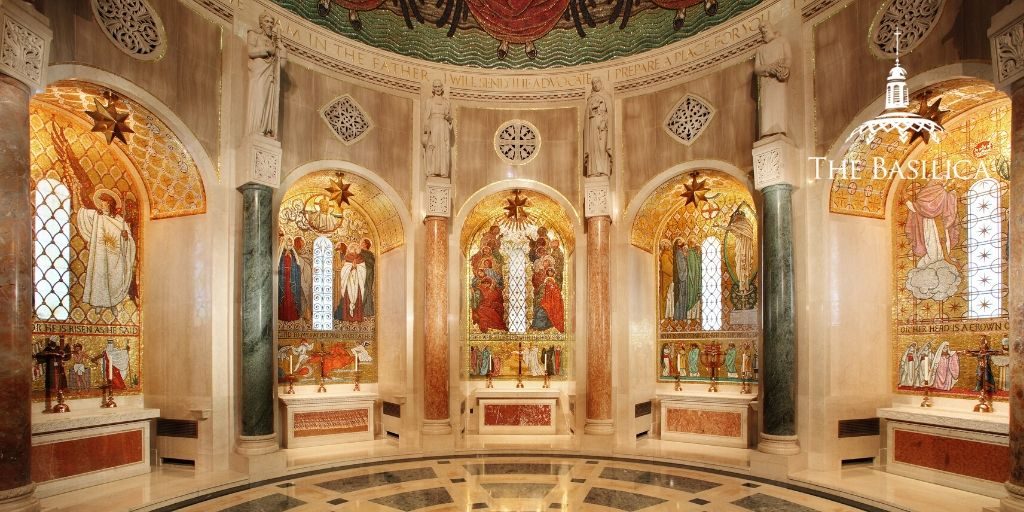 As we enter the season of Easter, we reflect on the Glorious Mysteries during this celebration of Christ’s triumph over sin and death, rejoicing in the new life that we have been given. The Glorious Mysteries are depicted in multiple places in the Basilica, including the Great Upper Church and the Rosary Walk and Garden. 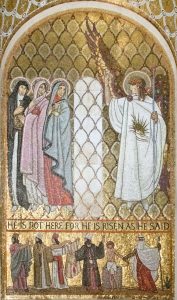 In the Great Upper Church, each of the Glorious Mysteries is depicted with its Old Testament foreshadowing. The Resurrection Chapel depicts the angel’s appearance to Mary, Martha, and the Blessed Mother, telling them of Christ’s resurrection. Jesus, in all his glory, rose from the dead in triumph, defeating sin and death, and securing eternal life for those who believe in him.

Then the angel said to the women in reply, “Do not be afraid! I know that you are seeking Jesus the crucified. He is not here, for he has been raised just as he said. Come and see the place where he lay.

The portrayal of the resurrection is accompanied by an image of Joseph being pulled out of the cistern (Genesis 37:12-28). 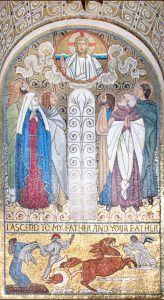 After rising from the dead, Jesus spoke to the disciples for the final time and ascended to take his seat at the right hand of the Father. In the Great Upper Church depiction, this is paralleled by a depiction of Elijah, riding to heaven in a chariot of fire (2 Kings 2:1-15).

So then the Lord Jesus, after he spoke to them, was taken up into heaven and took his seat at the right hand of God. But they went forth and preached everywhere, while the Lord worked with them and confirmed the word through accompanying signs.

The Ascension is significant because it marked that Jesus’ ministry on earth is done, and he is now in heaven to preparing a place for us. Yet, we are not left alone. 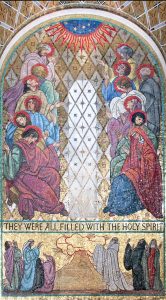 After his ascension, Jesus sent the Holy Spirit to guide his followers and be present with them until his return.

When the time for Pentecost was fulfilled, they were all in one place together.  And suddenly there came from the sky a noise like a strong driving wind, and it filled the entire house in which they were. Then there appeared to them tongues as of fire, which parted and came to rest on each one of them.  And they were all filled with the holy Spirit and began to speak in different tongues, as the Spirit enabled them to proclaim. 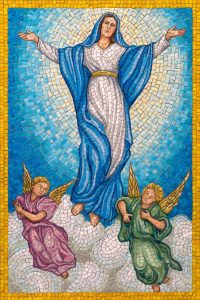 Now God has willed that the Blessed Virgin Mary should be exempted from this general rule [death]. She, by an entirely unique privilege, completely overcame sin by her Immaculate Conception, and as a result she was not subject to the law of remaining in the corruption of the grave, and she did not have to wait until the end of time for the redemption of her body. 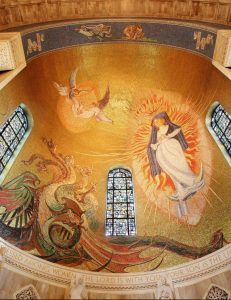 Revelation 12:1 is traditionally believed to refer to the Coronation of Mary:

A great sign appeared in the sky, a woman clothed with the sun, with the moon under her feet, and on her head a crown of twelve stars.

This scene is not only depicted in the Glorious Mysteries Chapels and the Rosary Garden – it is also the subject of the massive mosaic in the West Apse of the Upper Church, The Woman Clothed with the Sun.

Soli Deo Gloria: The Majestic Organs of the Basilica
Music and the Church: An Interview with Associate Director of Music Ben LaPrairie – Part II