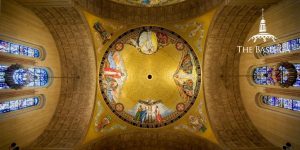 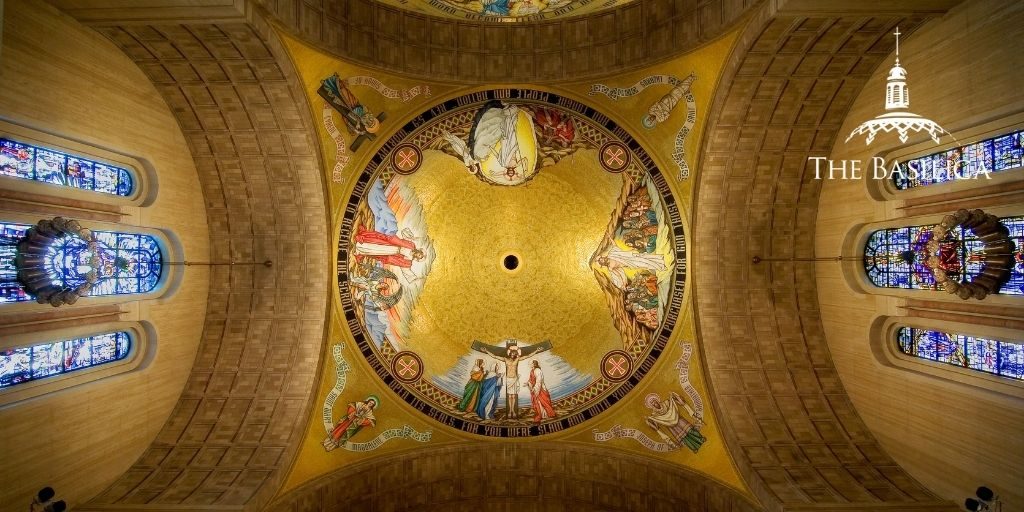 “In Him we have redemption by His blood, the forgiveness of transgressions, in accord with the riches of His grace…”
– Ephesians 1:7

35 years after the construction of the Great Upper Church was completed, work began on the domes of the Great Upper Church. Artist Leandro Miguel Velasco and Rambusch Decorating Co. designed the Redemption Dome, while holding true to the vision of the first Iconography Committee (1954–58). A year later, on November 16, 2006, the first dome was dedicated: the Redemption Dome.

Measuring 3,780 square feet (351 square meters), the mosaic has four different sections depicting the redemptive acts of Jesus. The Crucifixion is to the north, the Descent into Hell is to the east, the Temptation in the Desert is to the west, and the Resurrection is to the south. Each of the dome’s pendentives feature individuals that were significant figures in these redemptive acts: Lazarus, Simon of Cyrene, Joseph of Arimathea, and Mary Magdalene.

The entire dome is circled by Revelation 5:9:

“Worthy are you to receive the scroll and to break open its seals, for you were slain and with your blood you purchased for God those from every tribe and tongue, people and nation.”

Redemption in the Old Testament

At a basic level, redemption is the paying of a debt. We see this throughout the Old Testament, most prominently through the sacrificial system, but also in the book of Ruth, where Boaz redeems the land of his relative and Ruth with it, providing her with a home and an opportunity to continue the family lineage.

The book of Isaiah also talks about redemption:

But now, thus says the Lord,
who created you, Jacob, and formed you, Israel:
Do not fear, for I have redeemed you;
I have called you by name: you are mine.
When you pass through waters, I will be with you;
through rivers, you shall not be swept away.
When you walk through fire, you shall not be burned,
nor will flames consume you. – Isaiah 43:1-2

Christ’s Redemption of Us

Whether in the Old Testament or New Testament, redemption comes at a price. As a result of the Fall, we are born as slaves to sin and our penalty is death. In the Old Testament, that price is paid by the blood of lambs and goats, but when Christ came, He became the perfect spotless lamb that paid the penalty for our sins:

“You were dead in your transgressions and sins in which you once lived following the age of this world…But God, who is rich in mercy, because of the great love he had for us, even when we were dead in our transgressions, brought us to life with Christ (by grace you have been saved).” – Ephesians 2:1-2, 4-5

Christ was tempted, and yet he resisted the devil. He gave His own life, taking on our sin, and triumphed over death in His glorious Resurrection. His blood was the price that bought us life – rescuing us from being eternally separated from Him.

In a sense, redemption is the theme that holds the whole Bible together. In the Old Testament, God’s people continually struggle with sin and look forward to salvation through the Messiah, and in the New Testament, Christ comes and brings redemption – not only to the Jews, but also to the Gentiles. No longer are we slaves to sin, but as redeemed children of Christ, we can rest in the assurance of our redemption and proclaim the glorious mercy that God has extended to us.

A Song of the Heart: St. Cecilia and Sacred Music
Prayers for Those in the Military