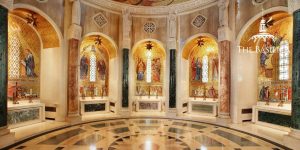 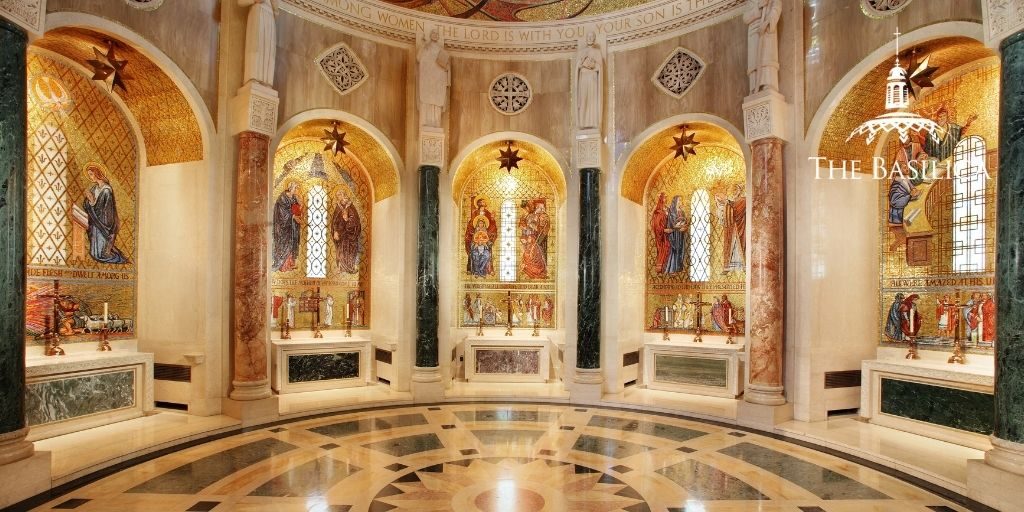 “The angel said to them, ‘Do not be afraid; for behold, I proclaim to you good news of great joy that will be for all the people. For today in the city of David a savior has been born for you who is Messiah and Lord.'” — Luke 2:10-11

As we begin the celebration of Advent and Christmas, now is the perfect time to reflect on the Joyful Mysteries of the Rosary. These mysteries, which capture the jubilance of the Messiah’s birth and early life, are depicted throughout the Basilica, including in the Great Upper Church and in the Rosary Walk and Garden. Learn more about the significance of the Joyful Mysteries and where they are found in the Bible. 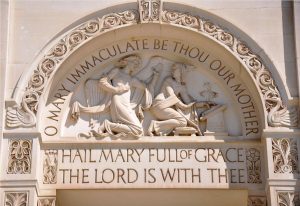 The First Joyful Mystery is the Annunciation. The angel Gabriel came to Mary and told her that she would bear the Son of God, who would bring redemption to the world. In the Great Upper Church, this is depicted with the Old Testament parallel of Moses and the burning bush, where Moses is charged with saving his people.

Then the angel said to her, “Do not be afraid, Mary, for you have found favor with God. Behold, you will conceive in your womb and bear a son, and you shall name him Jesus. He will be great and will be called Son of the Most High, and the Lord God will give him the throne of David his father, and he will rule over the house of Jacob forever, and of his kingdom there will be no end.”— Luke 1:30-33

You can find the First Mystery portrayed in the Basilica in the Annunciation Chapel, the Rosary Walk and Garden, the south façade, the chancel clerestory windows, and the Incarnation Dome.

After Mary learned she was to bear the Christ Child, she visited her cousin Elizabeth, who was also pregnant. Elizabeth’s pregnancy was a miracle from God as well; she had conceived in her old age after struggling with infertility her entire life. As Elizabeth greeted Mary with great joy, she blessed Mary for her faithfulness.

When Elizabeth heard Mary’s greeting, the infant leaped in her womb, and Elizabeth, filled with the Holy Spirit, cried out in a loud voice and said, “Most blessed are you among women, and blessed is the fruit of your womb. And how does this happen to me, that the mother of my Lord should come to me? – Luke 1:41-43

The Old Testament parallel is that of Obed-Edom welcoming the Ark of the Covenant into his home, as described in 2 Samuel 6, which is portrayed in the Visitation Chapel of the Great Upper Church. The Visitation is also found in the Rosary Walk and Garden.

Shortly before Mary was due to give birth, she and Joseph had to travel to Bethlehem for the census since he was of the line of David. When they arrived, they could find no place to stay, and Mary had to give birth in a stable. An angel appeared to shepherds in the fields outside the city, proclaiming the Christ Child’s birth.

The angel said to them, “Do not be afraid; for behold, I proclaim to you good news of great joy that will be for all the people. For today in the city of David a savior has been born for you who is Messiah and Lord. And this will be a sign for you: you will find an infant wrapped in swaddling clothes and lying in a manger.” And suddenly there was a multitude of the heavenly host with the angel, praising God and saying: “Glory to God in the highest, and on earth peace to those on whom his favor rests.” – Luke 1:10-14

The shepherds came and visited the Child, telling Mary and Joseph what had happened, and praised God.

In the Nativity Chapel, this mystery is depicted with its Old Testament parallel, Isaiah prophesying the Messiah’s virgin birth in Isaiah 7:14. You can also find it in the Rosary Walk and Garden, the Incarnation Dome, and the chancel clerestory windows.

Fourth Mystery: Presentation in the Temple

Just as Hannah dedicated her son to the Lord in 1 Samuel 1:24-28, Mary and Joseph presented Jesus at the temple in Jerusalem, in accordance with the Old Testament law, sacrificing a pair of turtledoves.

When the days were completed for their purification according to the law of Moses, they took him up to Jerusalem to present him to the Lord, just as it is written in the law of the Lord, “Every male that opens the womb shall be consecrated to the Lord,” – Luke 2:22-23

While in the temple, an old and righteous man named Simeon came to them. The Lord had promised him that he would not die before he had seen the Savior. When he saw Jesus, he took Him in his arms and blessed Him. Similarly, a widow named Anna who frequented the temple, praying and fasting, praised God when she saw the Infant Jesus.

The Presentation is featured in a chapel of the Great Upper Church, and the Rosary Walk and Garden.

Fifth Mystery: Finding in the Temple

When Jesus was twelve years old, he traveled with Mary and Joseph to Jerusalem for Passover. Upon departing from the city, they unintentionally left Jesus behind. Believing Him to be in the caravan with other relatives, they searched for a day before deciding to return to the city. After searching for an additional three days, they found Him in the temple, conversing with the elders.

All who heard him were astounded at his understanding and his answers. When his parents saw him, they were astonished, and his mother said to him, “Son, why have you done this to us? Your father and I have been looking for you with great anxiety.” And he said to them, “Why were you looking for me? Did you not know that I must be in my Father’s house?” But they did not understand what he said to them. — Luke 2:47-49

Jesus impressing the elders at the temple with His wisdom parallels Daniel astonishing the elders of his time in Daniel Chapter 13 and displayed his already-extensive knowledge of the Scriptures. Later in his ministry, he would use this knowledge to challenge the elders and demonstrate his authority as the Son of God.

The Finding in the Temple is depicted in the Great Upper Church and the Rosary Walk and Garden.

The Reluctant Leader: St. Ambrose
What Can We Learn from Noah?