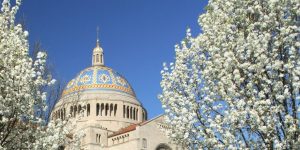 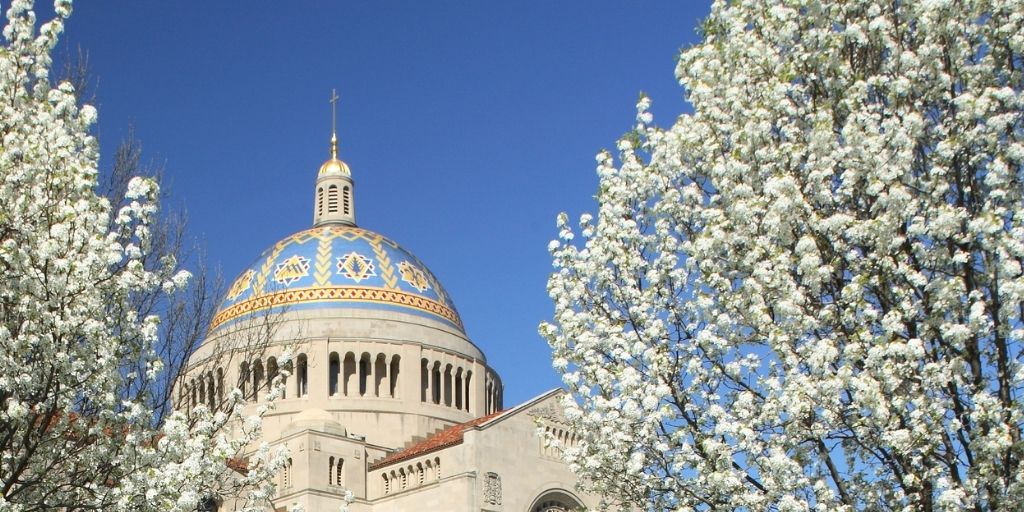 You’ve probably read about the glittering mosaics of the National Shrine, or its staggering domes and majestic façades. But did you also know that the National Shrine includes vibrant gardens redolent with sacred art and imagery? With the grounds currently in full bloom, we invite you to take a virtual walk through the Basilica gardens with us! 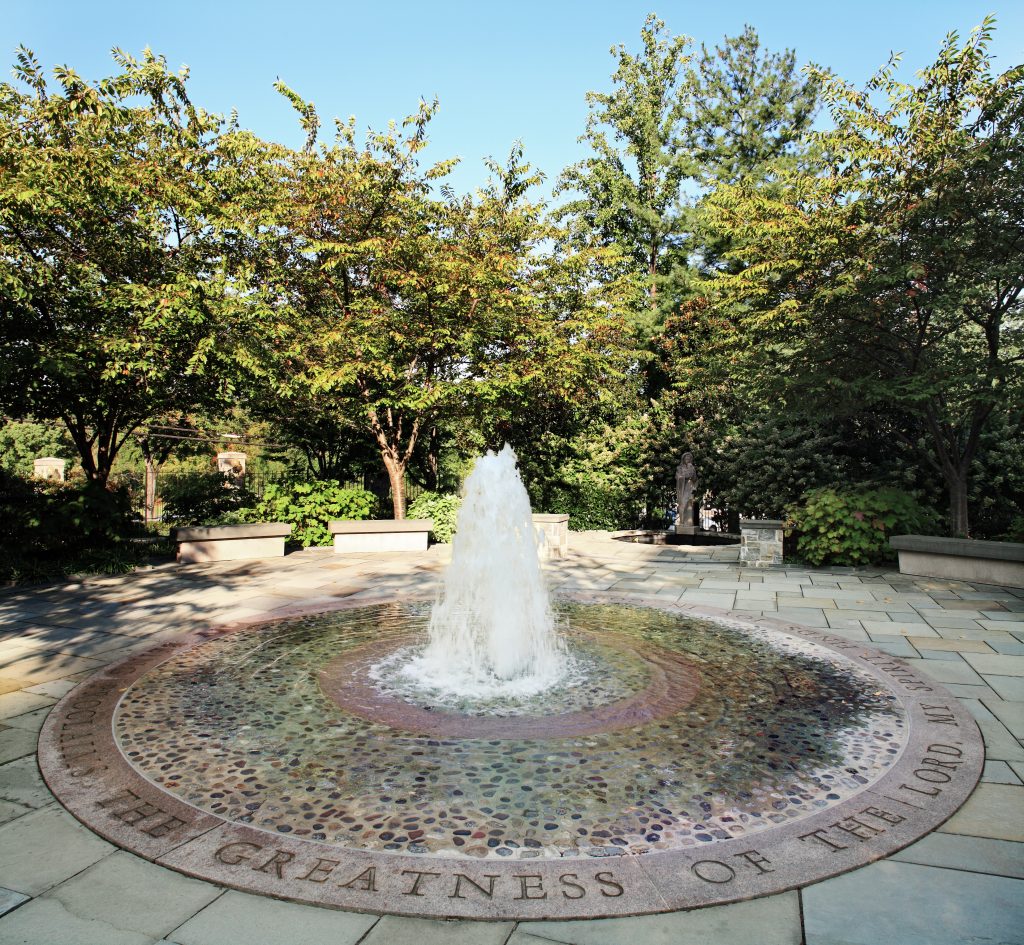 Situated on a three-quarter acre site along the northwest grounds, Mary’s Garden provides an outdoor setting for hospitality, rest, and quiet prayer. The garden is shaped in a circle to symbolize eternity and lined with a walkway that leads to the Magnificat Fountain, whose red granite border is incised with two lines from Luke 1:46–47: “My being proclaims the greatness of the Lord. My spirit finds joy in God my Savior.” On June 10, 2000, Archbishop Gabriel Montalvo, Apostolic Nuncio to the United States, dedicated the Garden 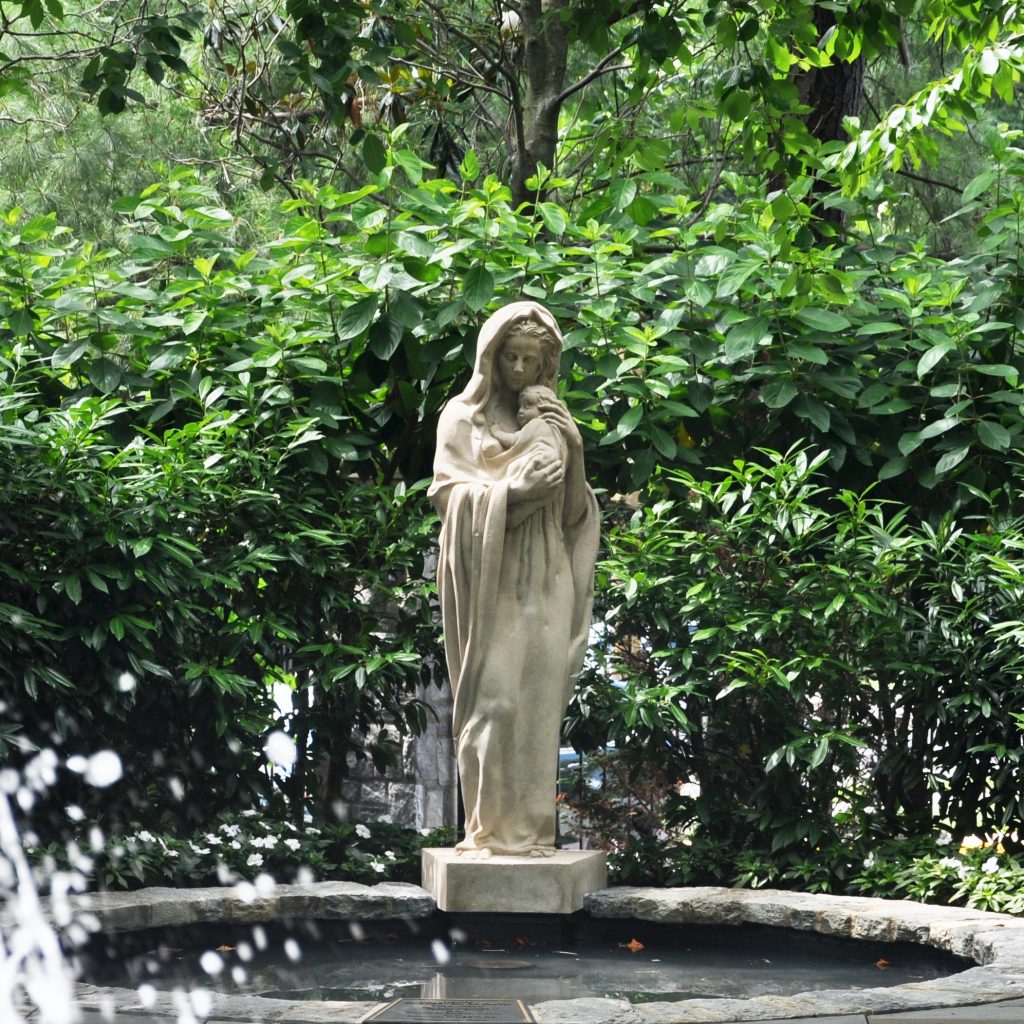 Mary, Protector of the Faith Statue

At the far end of the terrace lays a reflecting pool with a life-size statue called Mary, Protector of the Faith by Jon-Joseph Russo (2000), which portrays the Blessed Mother lovingly cradling the infant Jesus. The statue stands in honor of fifth director of the National Shrine, Bishop Thomas J. Grady, who oversaw the construction of the Great Upper Church. The outer walkway features prayer niches with stone benches and biblical passages incised into the stone, encouraging meditation in the sacred space. 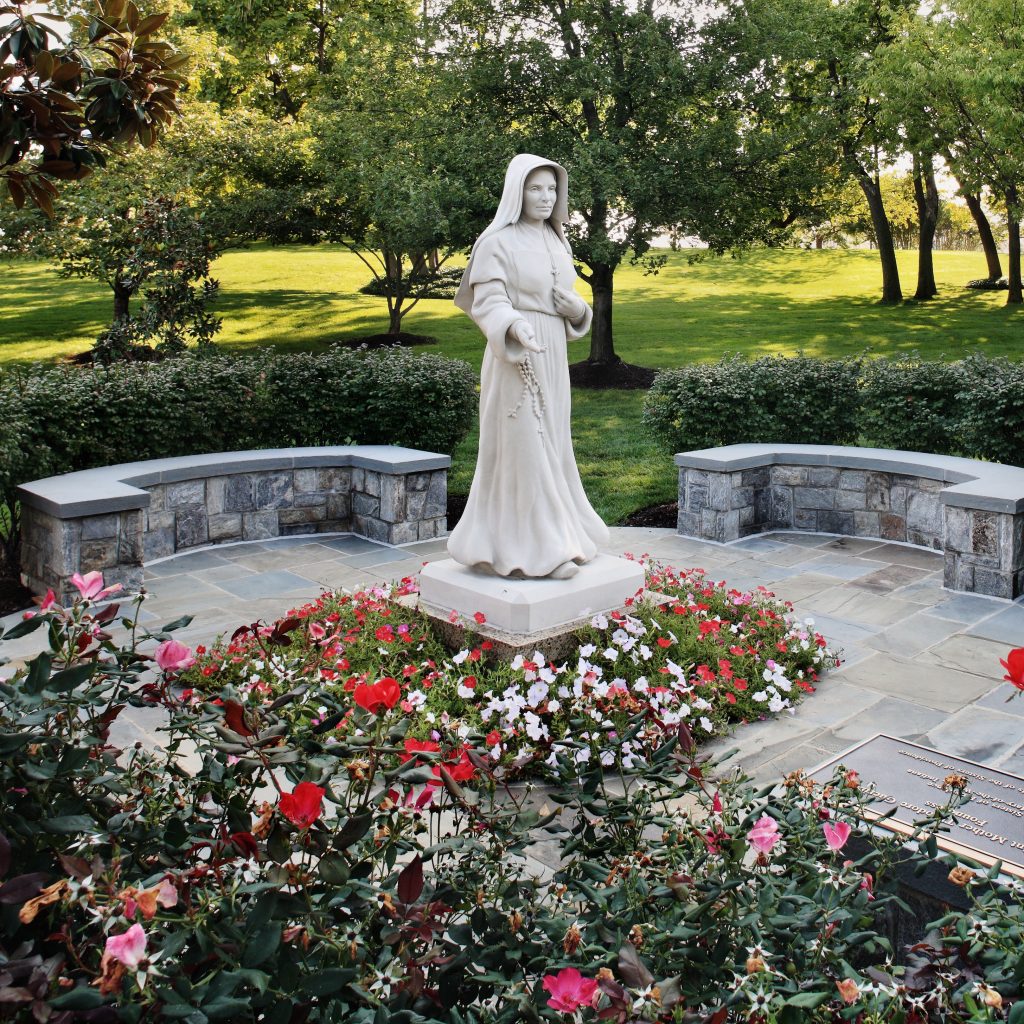 Adjacent to Mary’s Garden stands a life-size Indiana limestone sculpture of Saint Mother Théodore Guérin (1798– 1856) by Teresa Clark (2008). Known as “Mother” Théodore Guérin, she was the first saint from the state of Indiana to be canonized. In the spring, the sculpture is enwreathed by bursts of pink and red petunia blossoms – blooms evocative of the sweet compassion embodied by this devoted woman of the faith.

On May 10, 2008, Archbishop Pietro Sambi, Apostolic Nuncio to the United States, dedicated the statue, a gift of the Sisters of Providence of Saint Mary-of-the-Woods. 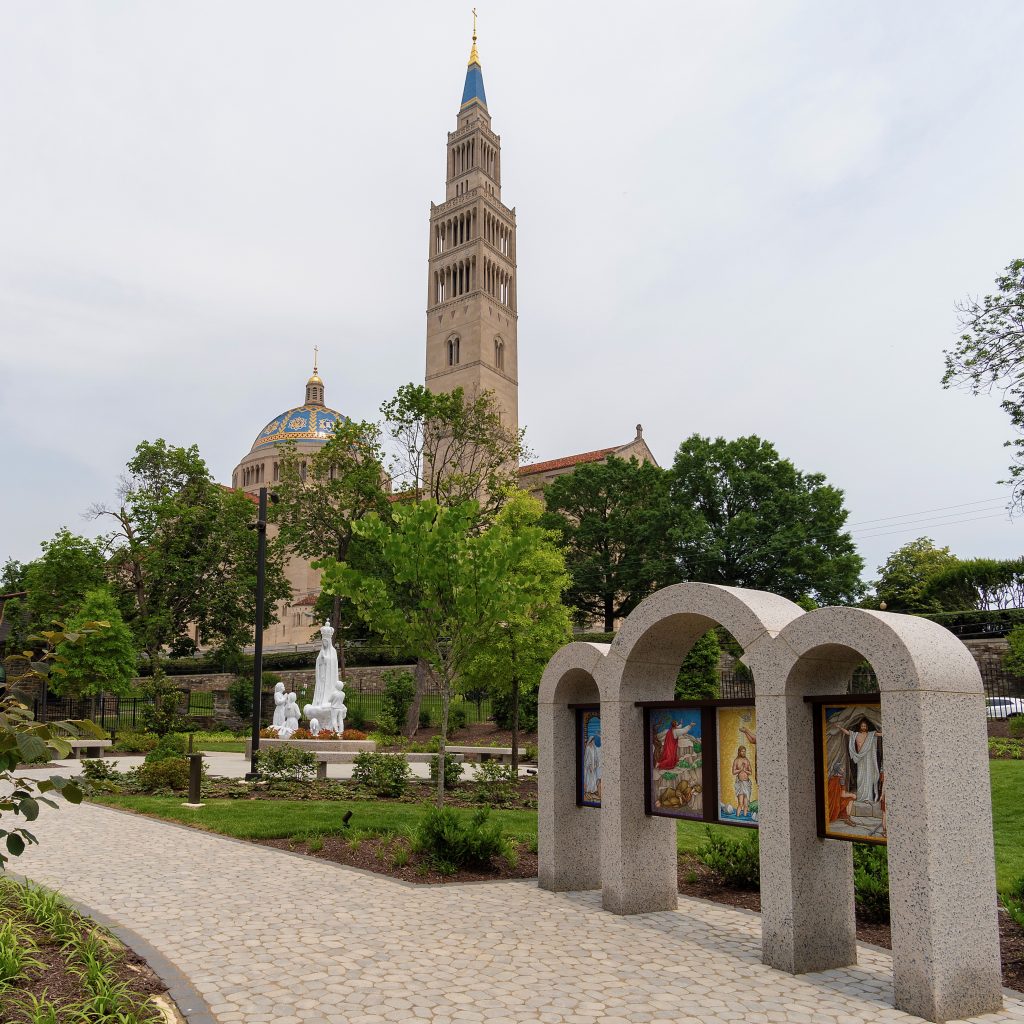 A verdant haven for prayer and meditation, the Rosary Walk and Garden is tucked away on west side of the Basilica on historic acreage of the Church. The walkway of the Rosary Garden is designed to resemble a rosary strand with beads. Its path winds to five different granite arches, with each arch containing a set of one decade of the Rosary. Each set of mysteries has a different-colored border: the Joyful, blue; the Sorrowful, purple; Luminous, white; and Glorious, gold. The mosaics were designed by David Gavasheli, and created by Artistic Mosaics by Travisanutto of Spilimbergo, Italy. On September 23, 2017, Bishop Frank Caggiano, Bishop of Bridgeport, dedicated the Rosary Walk and Garden. 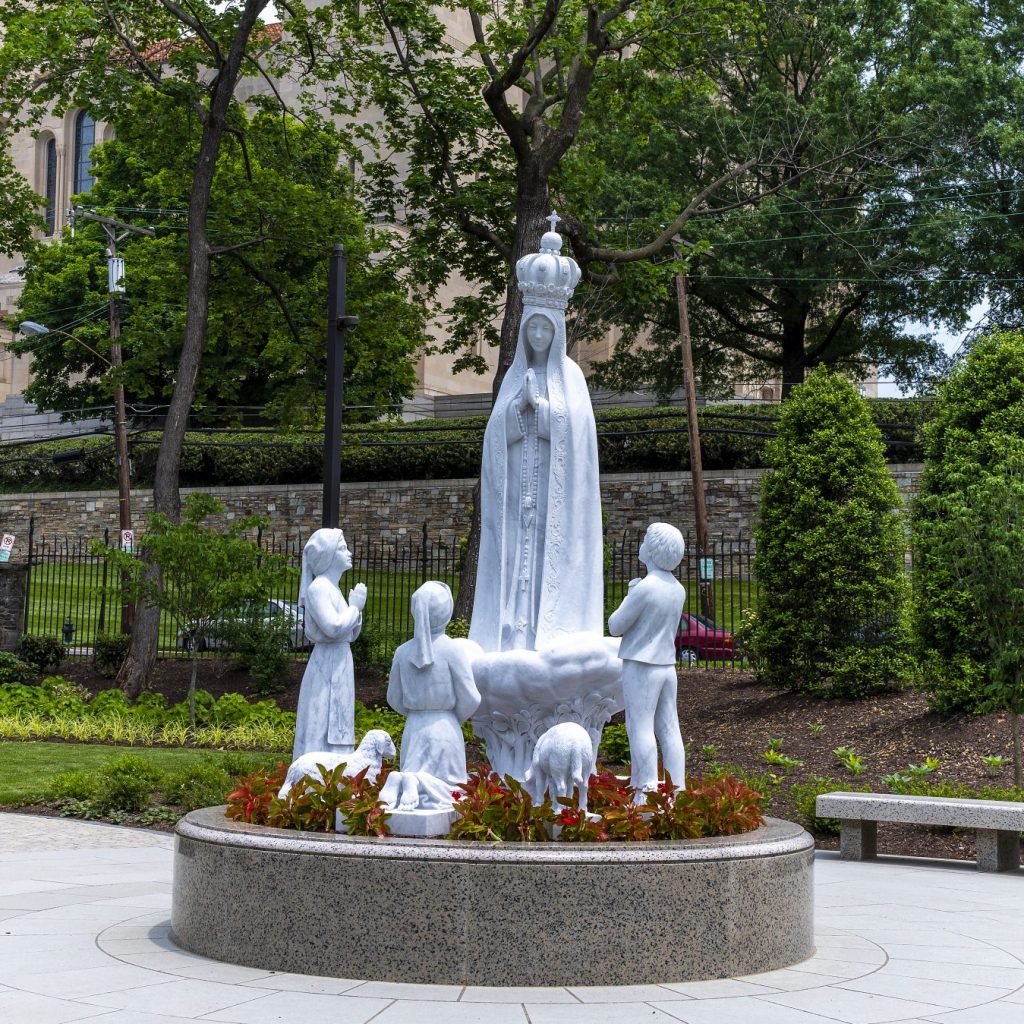 Our Lady of Fatima Statue

According to tradition, on May 13, 1917, the Virgin Mary appeared to three shepherd children, Lúcia dos Santos, Francisco Marto, and Jacinta Marto, near Fatima, Portugal. The children saw her five more times in the months that followed, and she asked them to pray the Rosary daily and give devotion to her Immaculate Heart, and more miracles followed. Our Lady of Fatima has since become a beloved Marian devotion of protection and hope for those suffering, offering comfort through times of uncertainty.

The apparition at Fatima is honored in the Basilica Gardens in a white Carrara marble statue modeled and carved by Franco Cervietti Studios, Pietrasanta, Italy, according to sketches provided by the Rambusch Decorating Co. The Statue of Our Lady of Fatima recently suffered irreparable damage but efforts are underway to replace it. The picture featured left shows the statue prior to being damaged. 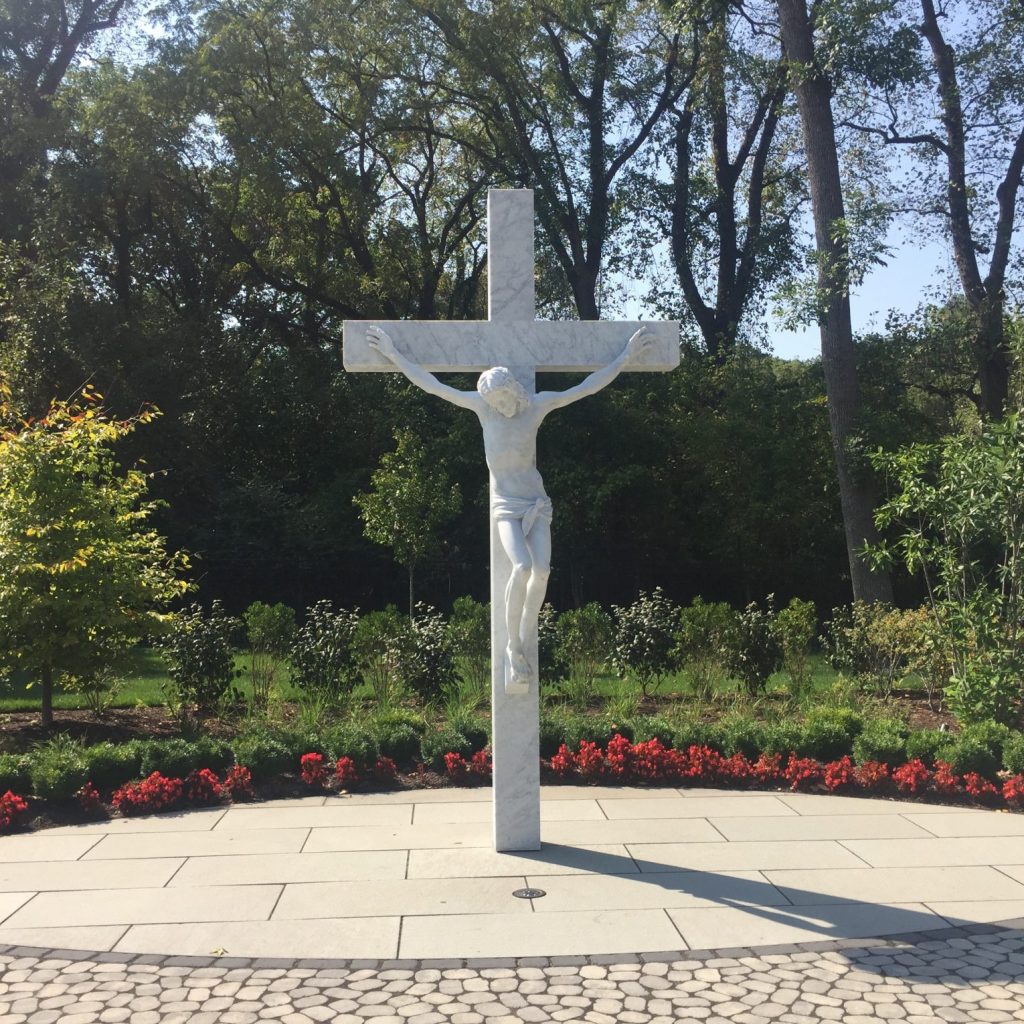 On the lower west side of the garden, across from the Fatima statue, is the sculpture of Christ Crucified, symbolizing the beginning and the end of the Rosary. A stunning work of white Carrara marble, this sculpture was also modeled and carved by Franco Cervietti Studios, Pietrasanta, Italy, according to sketches provided by the Rambusch Decorating Co.

Interested in seeing the Basilica Gardens in person? See our tours page to plan your visit.