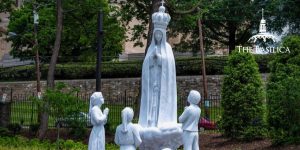 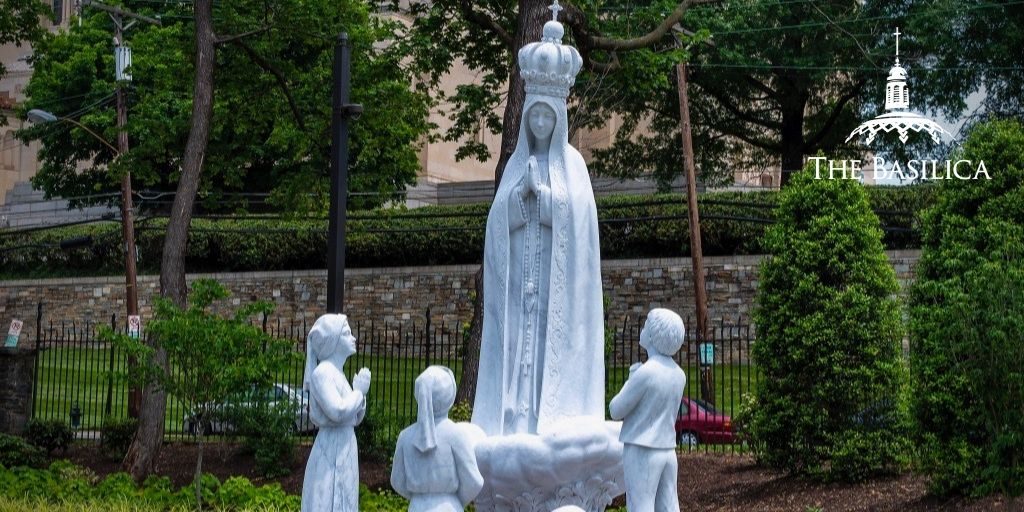 On May 13, we celebrate the Feast of Our Lady of Fatima, looking to the Blessed Mother for peace and comfort in times of uncertainty. According to tradition, on May 13, 1917, the Virgin Mary appeared to three shepherd children, Lúcia dos Santos, Francisco Marto, and Jacinta Marto, near Fatima, Portugal. The children saw her five more times in the months that followed, and she asked them to pray the Rosary daily and give devotion to her Immaculate Heart. During the last sighting, she told the children her name was The Lady of the Rosary and gave them a message of prayer, peace, and penance known as the “Secret.” The “Secret” was given in three parts in the years that followed.

That same year, in what later became known as the Miracle of the Sun, on October 13, 1917, throngs of the faithful who gathered in Fatima reported seeing the sun dance in the sky. This joyous miraculous event continues to bring hope to the faithful around the world, as Cardinal Tarcisio Bertone has remarked:

Ninety years after the apparitions, Fatima continues to be a beacon of comforting hope but also a strong appeal for conversion. The light that Mary made shine into the eyes of the shepherd children and manifested to so many people in the miracle of the sun on 13 October, shows that God’s grace is stronger than sin and death.

Lúcia later became a Carmelite nun and wrote her Memoirs in 1942, revealing the first two parts of the “Secret.” The first was a vision of hell, and the second predicted the end of World War I and the possibility of World War II.

However, it was not until the year 2000 that the third part of the secret was disclosed, describing the murder of a “bishop clothed in white.” This is believed to have been predictive of the assassination attempt on Pope John Paul II.

After the assassination attempt on May 13, 1981, Pope John Paul II wrote to Sr. Lúcia: “it was a mother’s hand that guided the bullet’s path and in his throes [he] halted at the threshold of death.” He later made a pilgrimage to Fatima, giving one of the bullets from the attempt to the shrine, where it was placed in the crown of the statue of Our Lady.

The Hope of Fatima

Our Lady of Fatima has since become a beloved Marian devotion of protection and hope for those suffering, offering comfort through times of uncertainty. As Pope John Paul II noted:

[I]t is the suffering who feel attracted by the perspective of “relief” which the Divine Physician is able to offer those who turn to Him with trust. And in Fatima this relief is found: sometimes it is physical relief, when, in his providence, God grants healing from illness; more often it is spiritual relief, when the soul, pervaded by the inner light of grace, finds the strength to accept the painful weight of infirmity, transforming it, through communion with Christ, the suffering servant, into an instrument of redemption and salvation for oneself and one’s brothers and sisters. The direction to move in, on this hard road, is pointed out to us by the motherly voice of Mary, who, in the history and life of the Church, has always continued to repeat—and in a special way in our time—the words “Do whatever He tells you.”

Prayer to Our Lady of Fatima

When Pope John Paul II made the third part of the secret public, he wrote the following prayer, which refers to the Act of Entrustment:

Mother of all individuals and peoples, you know all their sufferings and hopes. In your motherly heart you feel all the struggles between good and evil, between light and darkness, that convulse the world: accept the plea which we make in the Holy Spirit directly to your heart, and embrace with the love of the Mother and Handmaid of the Lord those who most await this embrace, and also those whose act of entrustment you too await in a particular way. Take under your motherly protection the whole human family, which with affectionate love we entrust to you, O Mother. May there dawn for everyone the time of peace and freedom, the time of truth, of justice and of hope.

In honor of Our Lady of Fatima, we invite you to light a candle today at the Basilica. Vigil candles burn in the chapels throughout the Upper Church and lower crypt level of the National Shrine. Each candle represents the faith of the supplicants and their fervent prayers entrusted to the intercession of the Blessed Mother.

Light a candle
100th Anniversary of the Blessing of the Land
A Tribute to Mary, Mother of Mankind