They are everywhere, yet somehow often manage to escape our notice: accenting the pendentives and mosaics, gracing the façades, and scattered throughout countless chapels and oratories, the Basilica’s angels are integral to its sacred art. God uses angels to provide protection to his children, to share messages, to fight the forces of the devil, and ultimately to bring himself glory. Learn more about what the Bible tells us about angels and where you can find them portrayed in the sacred art of the Basilica. 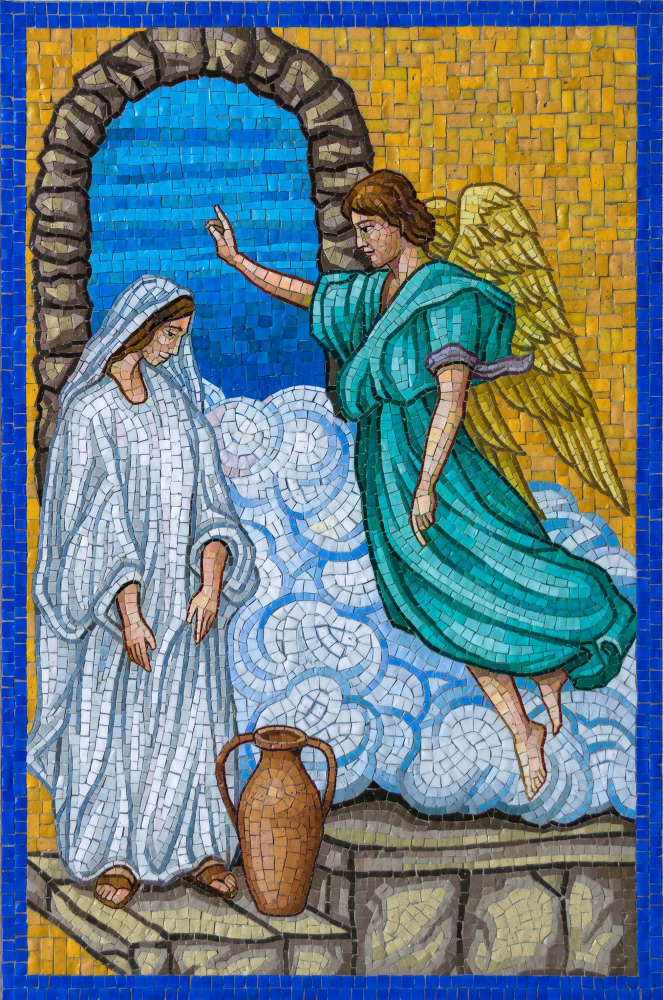 Only three angels are specifically mentioned by name in the Bible: Michael, Gabriel, and Raphael. Raphael performs healing acts, outlined in the Book of Tobit, and Michael and Gabriel served critical roles throughout the ages as messengers of God. Most importantly, in Luke 1, Gabriel was the angel who appeared to Mary, and informed her of God’s plan for her within the story of divine redemption. Gabriel also appeared to Zechariah to tell him that he and Elizabeth would bear a son. In the Old Testament, Gabriel is the angel who appeared to Daniel (Daniel 8:16; 9:21). The scene of the Annunciation is perhaps the most well-known angelic event, and is portrayed in the Basilica in the Annunciation Chapel, the southern façade, in the Incarnation Dome mosaic, and the Rosary Walk and Garden.

Michael is referred to as an “archangel,” indicating a degree of authority in an angelic hierarchy. But Michael doesn’t only serve as a messenger; he is also a fierce warrior, leading battles against demonic forces. Jude 1:9 tells us that Michael “argued with the devil in a dispute over the body of Moses,” and Revelation 12:7-8 describes Michael’s battle against the dragon in heaven. Michael is depicted in the Trinity Dome mosaic, as well as the Christ in Majesty mosaic. 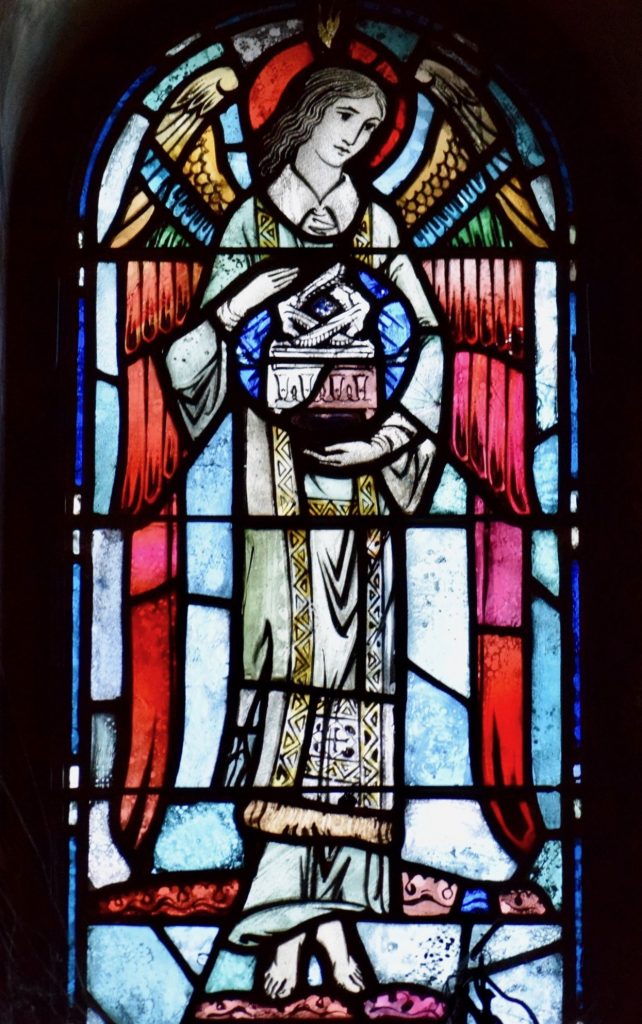 In addition to “living creatures,” the Bible mentions two other kinds of angels: the seraphim, who praise God (Isaiah 6:2-7), and the cherubim, who serve in a variety of capacities throughout Scripture. In one instance, God is borne on cherubim, flying through the sky. Psalm 18:11-12 relates:

He parted the heavens and came down,
a dark cloud under his feet.
Mounted on a cherub he flew,
borne along on the wings of the wind.
He made darkness his cloak around him;
his canopy, water-darkened stormclouds.

In Exodus 25:22, the Scriptures indicate that two cherubim sat above the Ark of the Covenant. One of these angels is depicted in stained glass in the Our Lady of Antipolo Oratory. The window is fashioned in the Gothic Revival style, made of stained and leaded glass. 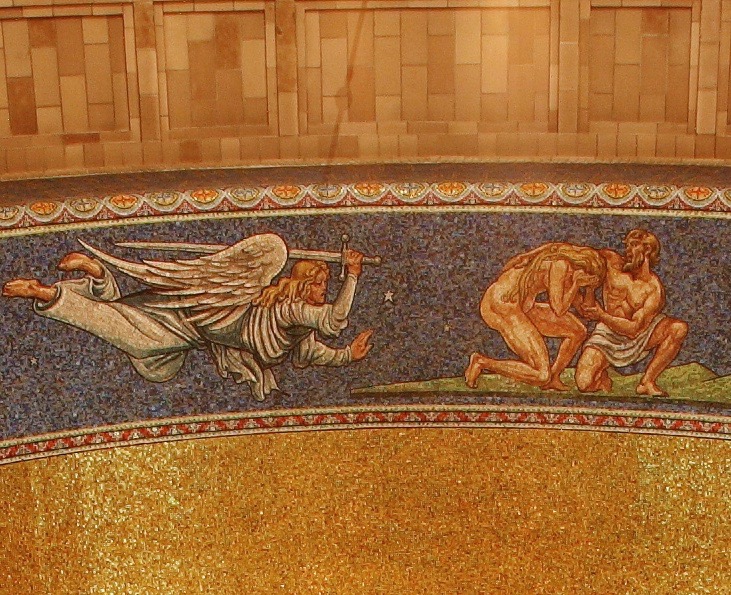 The Expulsion of Adam and Eve from Eden

After Adam and Eve sinned, God sent down cherubim to guard the entrance to the Garden of Eden. Genesis 3:24 states:

He expelled the man, stationing the cherubim and the fiery revolving sword east of the garden of Eden, to guard the way to the tree of life.

This scene is depicted in the soffit mosaic Expulsion from the Garden of Eden in the Upper Church. The scene is accented with text on the left reading, “Through Eve death,” and on the right, “Through Mary life.” 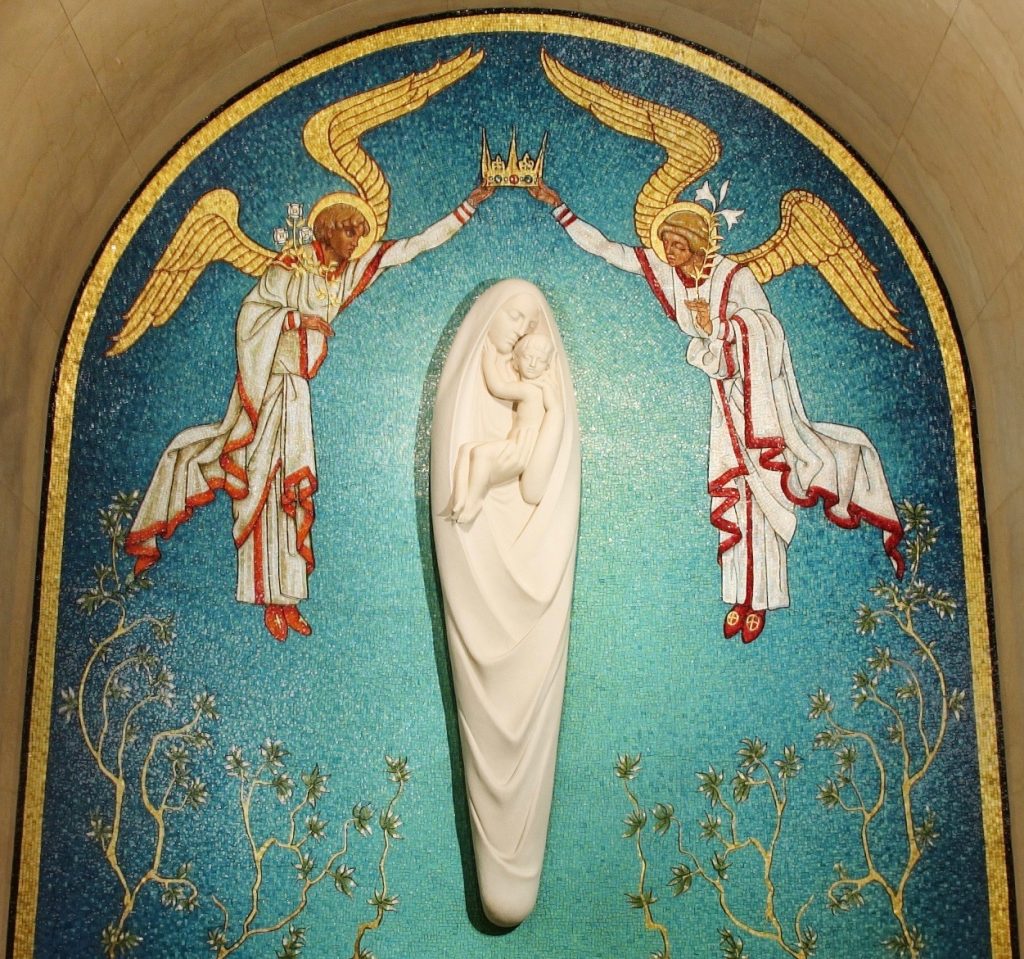 Angels Depicted with Mary in the Basilica

As the nation’s preeminent Marian shrine, the Basilica has over 80 oratories and chapels dedicated to the Blessed Mother. In addition to portraying events such as the annunciation, and the angel’s appearance to Mary at the resurrection, the Basilica also features a variety of artistic depictions of Mary surrounded by cherubim. In some cases, the cherubim flank her feet and accompany in her assumption to heaven; in others they crown her Queen. One such example of angels coronating Mary is in the Our Lady, Queen of Peace Chapel. 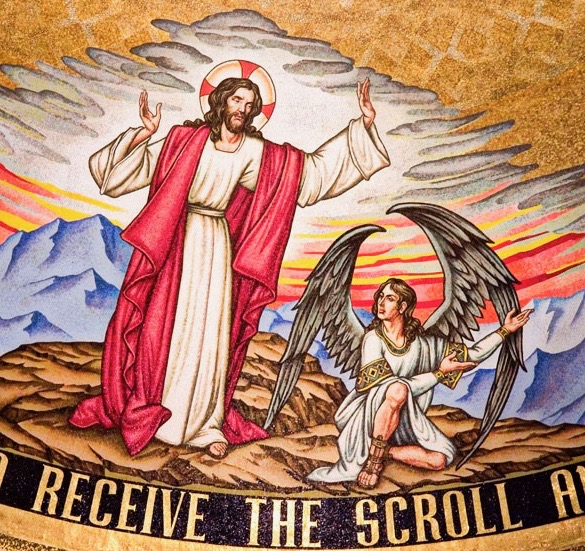 Throughout the Bible, angels are heavily involved in the life of Christ during his time on earth and beyond. After Jesus’ birth, the skies of Bethlehem were filled with angels singing praises to God and proclaiming Christ’s birth. When Jesus wandered in the desert for 40 days and 40 nights, angels came and attended to him after he rejected the temptations of Satan (Matthew 4:11). This scene is portrayed in the Redemption Dome. 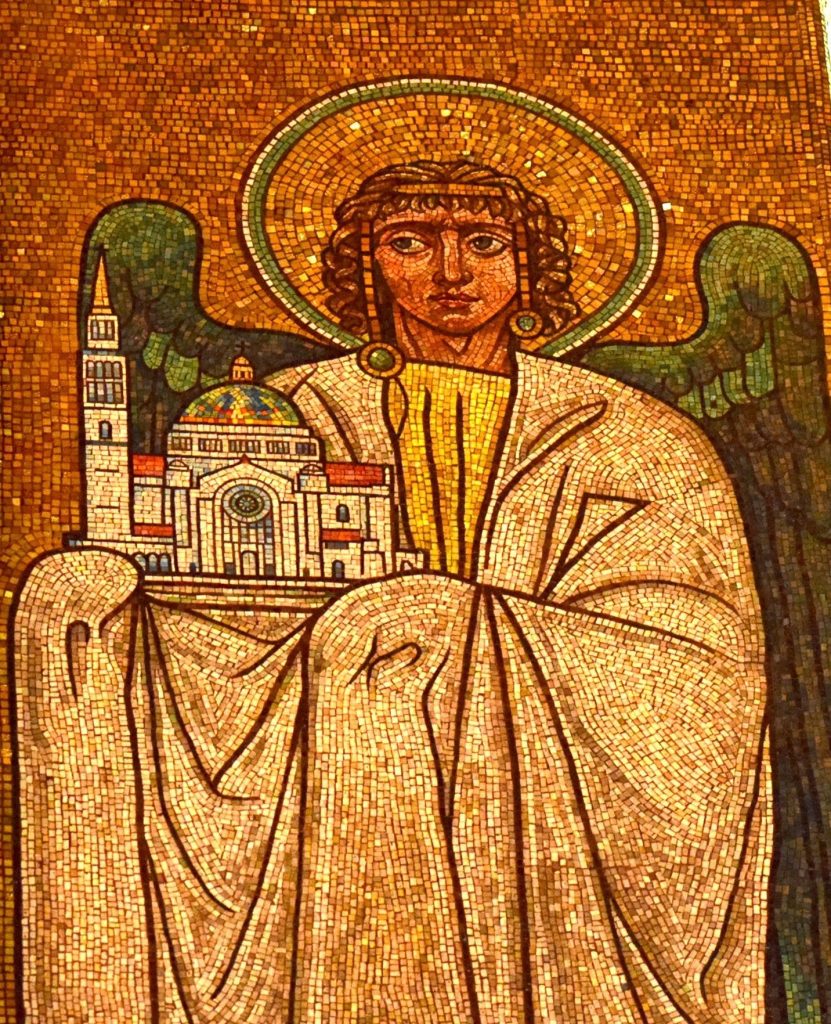 Angels as Guardians and Glorifiers of God

The Scriptures are filled with descriptions of how angels praise God and provide protection to his children:

Revelation 4:8 – Day and night they do not stop exclaiming:

Psalm 91:11 – For he commands his angels with regard to you,
to guard you wherever you go.

One example of where the Basilica portrays angels as protectors is in the Christ in Majesty mosaic, which depicts four guardian angels dressed in white. The angel on the far-left side of the mosaic holds the National Shrine in its hands, offering it to Christ.

Ruth and Naomi: A Story of Redemption
June 12 Statements from Church Leadership Regarding Msgr. Rossi