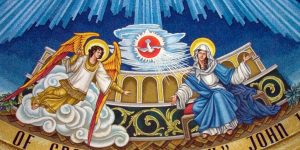 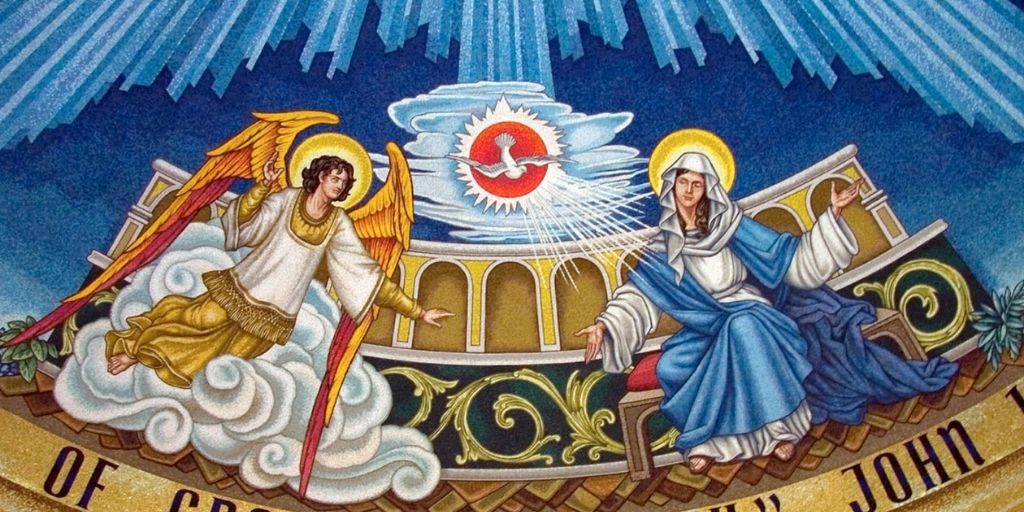 Mary said, “Behold, I am the handmaid of the Lord. May it be done to me according to your word.”
Then the angel departed from her. (Luke 1:38)

On March 25, we celebrate the Solemnity of the Annunciation, when the angel announced to Mary that she would bear the Savior of the World. Her spirit of unhesitating obedience to God’s will serves as an enduring example of holiness. The Basilica portrays this scene in numerous places, including the Annunciation Chapel, the Incarnation Dome, the South Façade, the Rosary Walk and Garden, a Chancel Clerestory window, and in a window above the Mother of Perpetual Help Chapel.

The Annunciation in Scripture

Mary was a young girl living in the town of Nazareth when the angel Gabriel appeared to her, telling her of God’s plans for her in the story of divine redemption. The scene begins in Luke:

In the sixth month, the angel Gabriel was sent from God to a town of Galilee called Nazareth, to a virgin betrothed to a man named Joseph, of the house of David, and the virgin’s name was Mary. And coming to her, he said, “Hail, favored one! The Lord is with you.” But she was greatly troubled at what was said and pondered what sort of greeting this might be. Then the angel said to her, “Do not be afraid, Mary, for you have found favor with God. Behold, you will conceive in your womb and bear a son, and you shall name him Jesus. He will be great and will be called Son of the Most High, and the Lord God will give him the throne of David his father, and he will rule over the house of Jacob forever, and of his kingdom there will be no end.” (Luke 1:26-34)

Mary wondered how this could be, considering she was a virgin – but the angel assured her that the Holy Spirit would come upon her, and that for God, nothing is impossible.

But Mary said to the angel, “How can this be, since I have no relations with a man?” And the angel said to her in reply, “The Holy Spirit will come upon you, and the power of the Most High will overshadow you. Therefore the child to be born will be called holy, the Son of God. And behold, Elizabeth, your relative, has also conceived a son in her old age, and this is the sixth month for her who was called barren; for nothing will be impossible for God.” Mary said, “Behold, I am the handmaid of the Lord. May it be done to me according to your word.” Then the angel departed from her. (Luke 1:34-38)

What We Can Learn from the Annunciation

The Annunciation reminds us that God is sovereign over all things and his infinite power is beyond our comprehension. When Mary asks the angel Gabriel “how can this be?” he reminds her, “Nothing will be impossible for God.” The miraculous nature of Christ’s entrance into the world also serves as proof of his divinity; Jesus was conceived in the Virgin Mary not of man, but of the Holy Spirit.

Mary’s attitude upon hearing the angel’s tidings was initially one of awe, and then acceptance. She submitted herself completely to God’s will for her life, knowing the consequences it would likely entail. Even knowing that she would face the ostracization of her community for becoming pregnant before her marriage to Joseph, she still accepted God’s will for her with faith. She responded to the life-changing news by simply replying with trust in God’s providence: “Behold, I am the handmaid of the Lord. May it be done to me according to your word.”

As we reflect upon the Solemnity of the Annunciation, may we, like Mary, always say yes to God’s plans for us.

In honor of the Solemnity of the Annunciation, we invite you to light a candle today at the Basilica. Vigil candles burn in the chapels throughout the Upper Church and lower crypt level of the National Shrine. Each candle represents the faith of the supplicants and their fervent prayers entrusted to the intercession of the Blessed Mother.

Light a candle
A Guide to the Sorrowful Mysteries at the Basilica
Turning to Christ, the Good Shepherd, in the Face of Uncertainty