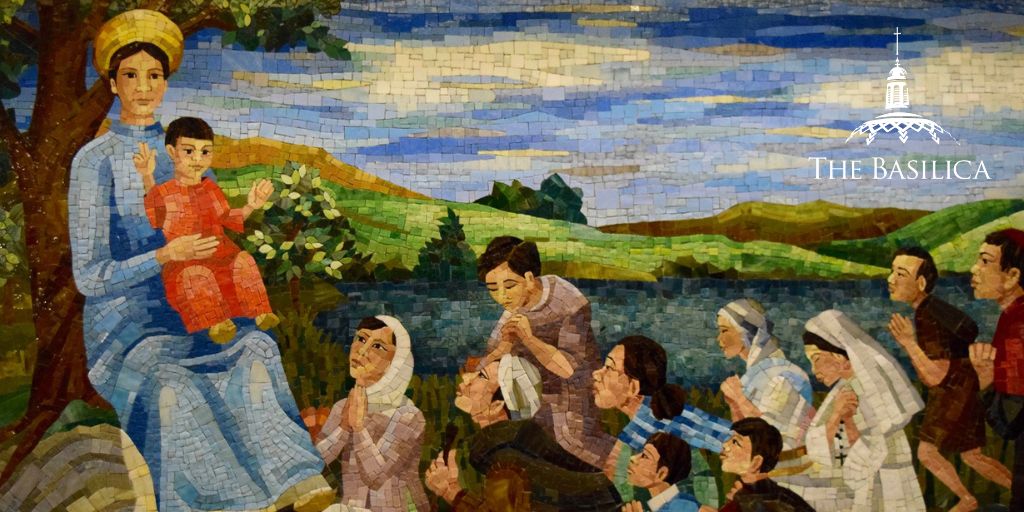 This post is the second in our Mary Across the Continents Virtual Tour series, celebrating the many ways the faithful honor Mary around the world. View the first post in the series here.

For centuries the Church has looked to Mary for protection in times of peril, as a guardian of the defenseless and the persecuted. Here at the Basilica, a number of devotions centering on Mary’s loving protection are honored in chapels, oratories, and more. Today, we invite you to virtually tour these spaces and learn more about the history of these beloved devotions.

Our Lady of Mt. Carmel

Though a group of monks first built a chapel on Mount Carmel dedicated to Mary as early as the 12th and 13th centuries, it wasn’t until the mid 1300s that the devotion to Our Lady of Mount Carmel came to be widely associated with Marian provision. Tradition holds that in 1251, during a period of oppression for the Carmelite orders in Europe, Saint Simon Stock received the scapular from Mary in a vision where she told him that all who died wearing it would be saved.

The Chapel of Our Lady of Mount Carmel in the Great Upper Church of the Basilica shows Mary holding the Infant Jesus and the brown scapular. They are surrounded by six Carmelite saints: Andre Corsini, Teresa of Avilia, Simon Stock, Mary Magdalene de Pazzi, John of the Cross, and Thérèse of Lisieux. A stained-glass window depicts Elijah, with the text: “In a little cloud God gave Elias a sign of the spotless virgin to come” — a lyric from a medieval hymn traditionally credited to Simon Stock.

Our Lady of China

The mosaic of Our Lady of China at the Basilica is a copy of a famous painting by renowned Chinese Catholic artist John Lu Hung-Nien. The original painting was used by the first Chinese Cardinal, Thomas Cardinal Tien Ken-Sin, to encourage Marian devotion in China and to encourage the persecuted Church. The Basilica’s mosaic rendition, a gift from 10,000 Chinese Americans, depicts Mary in traditional Chinese attire – a beautiful tribute to her care for the people of China.

Our Lady of La Vang

Our Lady of La Vang is a Vietnamese Marian tradition which originated in the 18th century. As the lower classes pushed back against the Catholic presence in the country, Christians fled to the remote jungle region of La Vang. Though under duress, the faithful would gather each night to pray the rosary under a large tree.

Tradition holds that on one of those nights in the midst of praying the Rosary, Mary appeared to them with the infant Jesus and presented the faithful with a fern to treat their illnesses. She brought encouragement and promised that their prayers would be heard. As the persecution continued, she appeared multiple times in the same location.

In the Chapel of Our Lady of La Vang on the Lower Level of the Basilica, a glass mosaic depicts the faithful of La Vang in period dress as they encounter Mary. Across the chapel, a twin mosaic is a copy of the painting “The Martyrs of Vietnam.” Overhead stretches a dark blue ceiling dotted with 24 stars to represent the night sky, and at the front of the chapel stands a statue of Our Lady carved in a unique multi-marble style by Italian artist Giancarlo Buratti.

What Is Omnipresence?
The National Shrine Shops Summer 2022 Collection