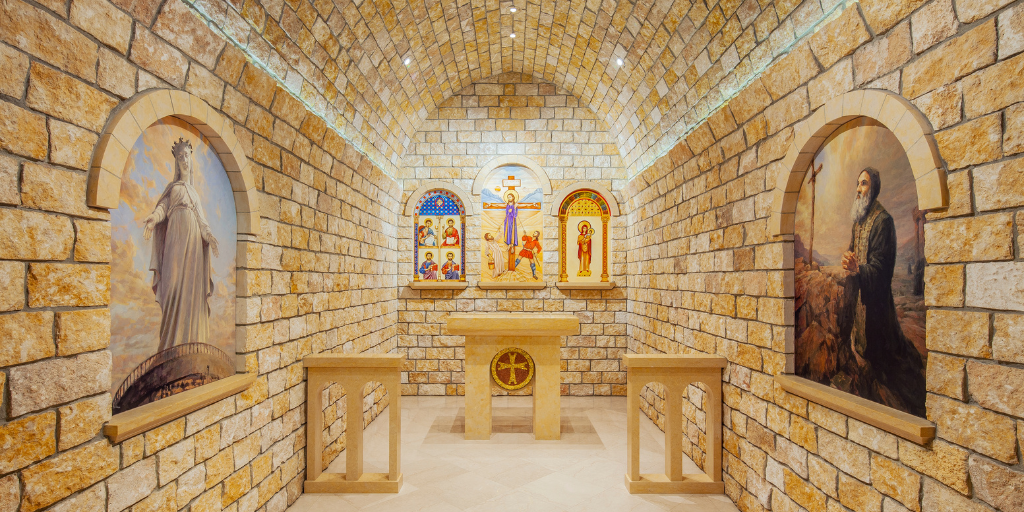 This month, we’re excited to launch a new virtual tour series celebrating the many ways the faithful honor Mary around the world. From Lourdes to La Vang, Our Lady is honored for the guidance and wisdom that she provides to the faithful across the continents. Discover how her global patronage is honored in the art and architecture of the Basilica in immersive 360° with this breathtaking virtual tour series.

Our Lady of Korea

In celebration of the centennial of Korean immigration to the United States in 2003, two Botticino marble tympana were blessed and dedicated on September 22, 2007: Our Lady of Korea at Cana and Our Lady of the Korean Martyrs. The Korean artists are Song-Ja Rim and Eui-Soon Choi respectively, and the carving was executed in Pietrasanta, Italy. The tympana are the gift of Korean Americans.

Our Lady of Lebanon

Our Lady of Lebanon is a devotion of the Maronite Church, an Eastern Church in full communion with the Roman Catholic Church. This chapel replicates a small Lebanese stone church. Located inside the chapel on the left wall is a painting of Our Lady of Lebanon by Cameron D. Smith (2011), which features the Blessed Virgin standing atop the Shrine in Lebanon.

The chapel also has multiple works of art in the “Rabbula” style, an artistic legacy taken from the Rabbula Gospels, the earliest known illuminated manuscript of the gospels written and illustrated in A.D. 586 and signed by the scribe Rabbula. On the wall behind the altar are three Rabbula-styled works of art by Maria Luisa Santamaria: a portrayal of the four evangelists, Christ Robed in Glory, and the Mother of the Light. This chapel observes the Maronite Rite of celebrating the sacraments, with Aramaic as the liturgical language.

Our Lady of Slovakia: Mary, Mother of Sorrows

Located in the Great Upper Church, the chapel of Our Mother of Sorrows prominently features a life-size marble sculpture of the Pietà, depicting the sixth of the Seven Sorrows: Mary holding Jesus as he is taken from the Cross. The other sorrows are sculpted in bronze and flank the Pietà. The chapel is a gift of the Slovak Union of the United States and Canada.

Inscribed in Slovak above the altar is the text: “Our Mother of Sorrows, Virgin Mary, Patroness of the Slovak People, Pray for Us.”

Dedicated to Mary, Queen of Ireland, this oratory features a statue of Our Lady and the Holy Child upon a hexagonal rock formation representing the Giant’s Causeway: the basalt columns that jut out of the sea along the coast of Northern Ireland in County Antrim. Mosaics and carvings, which honor the heritage of Irish Catholics, ornament the marble walls.

The alabaster window depicts themes of Irish devotion to the Blessed Mother and pilgrimage: the Shrine of Our Lady of Knock; the Mass Rock, which refers to Masses celebrated in secret in violation of the Penal Codes; the Crough or “mountain” of Patrick, where the saint fasted for 40 days and nights; and the Legion of Mary, founded in 1921 in Dublin for the Catholic laity.

Incised on the north wall is a map of Ireland with its four modern provinces, dominated by a figure of Saint Patrick. The designated monasteries are those of the Irish missionaries who sailed across the Atlantic to spread the Gospel.

Heralds of Triumph: The Bells of the Knights Tower Carillon
5 Things to Do at the Basilica This Summer