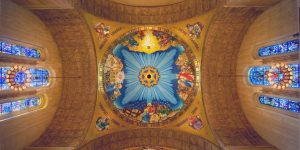 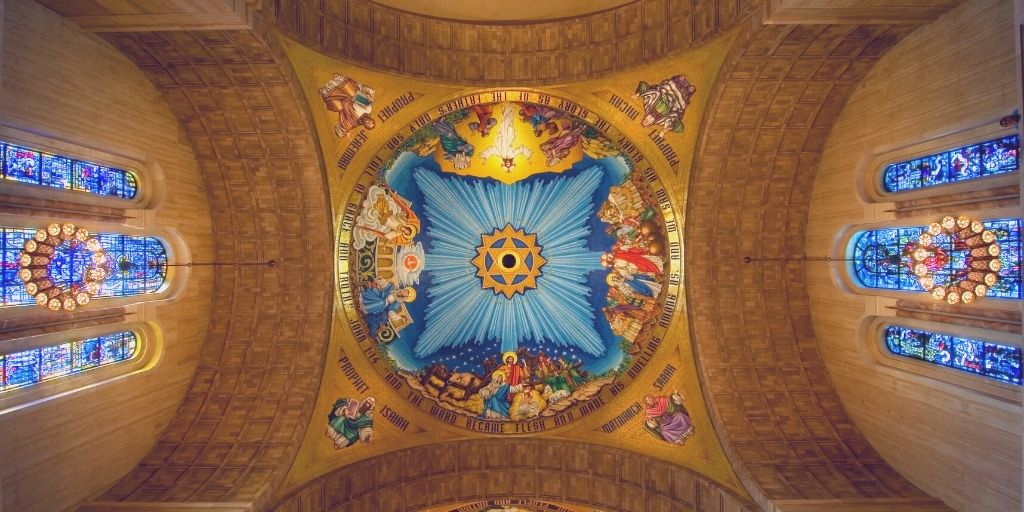 “Where can I go from your spirit?
From your presence, where can I flee?
If I ascend to the heavens, you are there;
if I lie down in Sheol, there you are.
If I take the wings of dawn
and dwell beyond the sea,
Even there your hand guides me,
your right hand holds me fast.” — Psalm 139:7-10

God Is Unconfined by Space or Time

The Bible frequently details how God cannot be contained by heaven and earth. As the Creator of the physical world, He is not confined by its limits: He is infinite. He can be present with us whenever and wherever we need Him – and if we are acting sinfully, we cannot escape His presence. As Job 34:21-22 says:

“For his eyes are upon our ways,
and all our steps he sees.
There is no darkness so dense
that evildoers can hide in it.”

Additionally, Genesis 1 describes how God created the world “in the beginning” and instituted the seven-day week through His process of creation — indicating that He created not only the physical world, but time itself.

Emmanuel — God with Us

We see this most significantly when Christ came to earth. As both God and man, He chose to exist inside time as a human, though still retaining His divine attributes. He became Emmanuel — “God with us” (Matthew 1:23) — fully God and fully human.

Philippians 2:5-8 describes how God was present on earth as Christ in this way:

“Have among yourselves the same attitude that is also yours in Christ Jesus,
Who, though he was in the form of God,
did not regard equality with God something to be grasped.
Rather, he emptied himself,
taking the form of a slave,
coming in human likeness;
and found human in appearance,
he humbled himself,
becoming obedient to death,
even death on a cross.”

God’s presence is also manifested when His people gather to worship Him, as demonstrated in the Old and New Testaments. As the Israelites wandered the desert, God was present in the tabernacle — the tent of meeting, where people would make sacrifices to atone for their sins. Later, King Solomon would build a glorious temple for the people to worship God. Solomon acknowledged that though it could not contain Him, His presence was manifested there, in 1 Kings 8:27, 29:

“‘Is God indeed to dwell on earth? If the heavens and the highest heavens cannot contain you, how much less this house which I have built!

May your eyes be open night and day toward this house, the place of which you said, My name shall be there; listen to the prayer your servant makes toward this place.’”

When Christ came, He eliminated the need for the temple and the sacrificial system, but He still emphasized the importance of gathering as God’s people and bringing before Him our petitions and thanksgiving, as He said in Matthew 18:19-20:

“’Again, [amen,] I say to you, if two of you agree on earth about anything for which they are to pray, it shall be granted to them by my heavenly Father. For where two or three are gathered together in my name, there am I in the midst of them.’”

The Apostle Paul describes the importance of unity as God’s people in 1 Corinthians 12, likening the faithful to the parts of the body working in cooperation, with Christ as the head.

As we gather as God’s people, we also remember His perfect sacrifice in the Eucharist, where Christ is not merely symbolically or metaphorically present, but is present in a real, true, and substantial way.

The Presence of the Holy Spirit

Though Jesus is no longer present in human form on earth, He did not leave us alone. John 14:16-17 tells us:

“‘And I will ask the Father, and he will give you another Advocate to be with you always, the Spirit of truth, which the world cannot accept, because it neither sees nor knows it. But you know it, because it remains with you, and will be in you.'”

After Jesus ascended, He sent the Holy Spirit to His disciples, enabling them to share the Gospel (Acts 2). The same power of the Holy Spirit fills the faithful today, interceding for us and sanctifying us:

Who was the first Christian king of Hungary?
Mary’s Care Across the Continents: A Virtual Tour