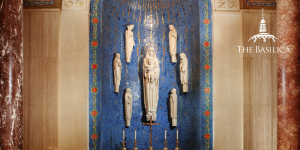 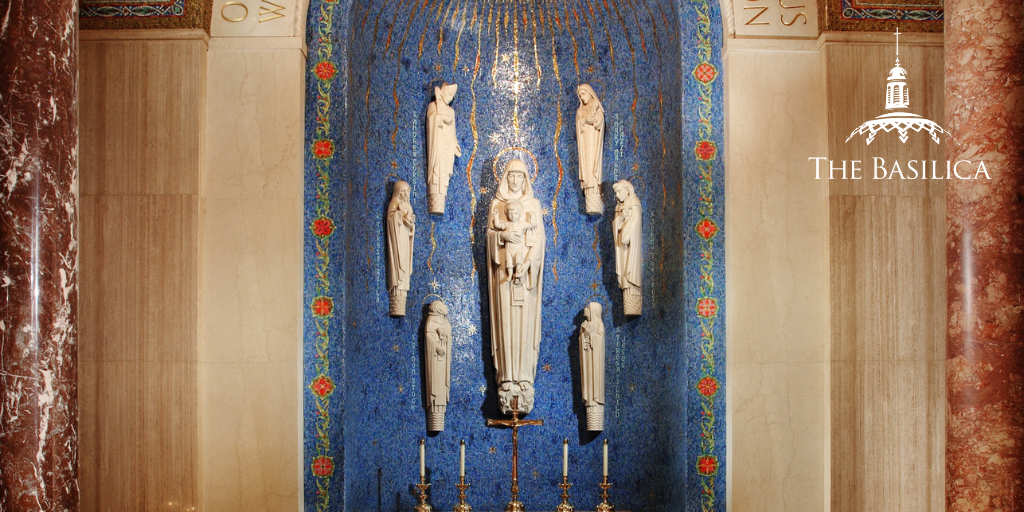 Did you know that the Basilica has a chapel dedicated to Our Lady of Mount Carmel that honors a variety of Carmelite saints? From the quiet “Little Way” of Thérèse of Lisieux to the epic escape of St. John of the Cross, each of their stories inspire us to pursue lives of holiness. As we celebrate the feast of Our Lady of Mount Carmel, we invite you to learn more about the legacies of these faithful Carmelites and discover where they are featured in this chapel. 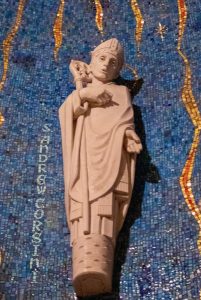 Born into a noble family in Florence on November 30, 1302, Andrew Corsini lived a libertine youth before reforming and joining the Carmelites in Florence in 1318. A decade later, he was ordained as a priest and began preaching in Florence. After studying at the University of Paris and Avignon, he returned to Italy, where he became known as “the Apostle of Florence” and assumed a role as prior at a convent.

By 1349, Andrew’s wisdom and spiritual gifts were so widely appreciated that Pope Clement VI named him bishop of Fiesole. But Andrew did not want the position and hid himself away upon hearing of the appointment. According to legend, a vision eventually led him to accept the position and return. He was particularly committed to ascetic practices, sleeping on a bed of vine branches and wearing a hair shirt. But what most set him apart was his gift for diplomacy: he became well-known for facilitating peace between clashing factions. His own dedication to personal frugality and care for the poor won him their favor, enabling him to better reconcile the nobles and the commoners.

Many miraculous healings were attributed to the aid of Andrew’s intercession, and Andrew also saw a vision of the Blessed Virgin foretelling his death on the feast of the Three Kings. After his passing, the proliferation of miracles was so marked that Pope Eugene IV allowed a devotion to Andrew prior to its official confirmation. One such miracle attributed to Andrew’s influence was the Florentine victory over the Milanese at the Battle of Anghiari on June 29, 1440. It was not until nearly two centuries later that he was canonized. 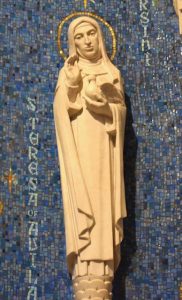 Teresa was born in Ávila, Spain in 1515. Growing up, she and her brother Rodrigo were fascinated with tales of martyrs, and one day tried to run away to Africa in hopes of achieving a similar fate. Luckily, thanks to the intervention of their uncle, they did not get too far – but that zeal for holiness would continue into adulthood. When she was 21, Teresa joined the Carmelite Order in Ávila.

Saint Teresa suffered from poor health for most of her life, but that did not stop her from filling her every waking hour with productivity. She oversaw the work of laborers and construction projects at monasteries, and managed relations with royalty and local government. Despite rising as early as 5 o’clock in the morning for worship, she would often work well past midnight. She founded over thirteen monasteries during her lifetime, many of which functioned as social hubs for the affluent. Teresa was determined to reform these monasteries into more focused institutions, and after years of battling opposition, finally won permission to create a separate province for the reformed order. Teresa is also well-known for her writings – most significantly, The Interior Castle, relating her spiritual insights. 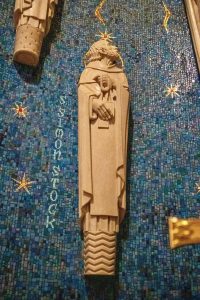 Did you know that according to legend, when Simon was just twelve years old, he decided to take a hollow tree trunk (stock) as his cloister and become a hermit? Not much else is known about his early life, but tradition holds that Simon joined the Carmelites after encountering a group of them on a pilgrimage to the Holy Land. Upon his return, he was instrumental in founding a number of Carmelite orders around European hubs of learning everywhere from Paris to Bologna. He also transformed the Carmelites into an order of mendicant friars rather than hermits.

But perhaps Simon is best known for his connection to the devotion of the scapular. On July 16, 1251, in Cambridge, England, during the oppression of the Carmelite Order, Simon saw an apparition of the Blessed Mother holding a scapular and urging the faithful to wear it for protection in peril. The popularity of the scapular exploded in the centuries that followed, and today, 18 different kinds of scapulars are approved for use by the Catholic Church. Although the garment that was first developed for nuns and monks from Simon’s vision consisted of two pieces of fabric worn over the chest and the back, connected by shoulder-straps, today, laypeople wear scapulars closer to the size of pendants about the neck. 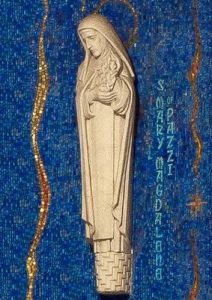 On April 2, 1566, Mary Magdalene de Pazzi was born into a noble Italian family in Florence. Originally named Caterina, Mary demonstrated a kind and charitable nature from her youth, expressing a fervent love for prayer, penance, and the Blessed Sacrament. After convincing her parents to let her become a nun, she joined the Carmelite convent of Santa Maria degl’ Angeli in December of 1582, and a month later, she received her habit and changed her name to Mary Magadalene de Pazzi. In March of the following year, she was afflicted with a terrible illness, and by May, it was believed that she would soon die. At her request, she was transported on a stretcher to make her profession on May 27, the Feast of the Trinity.

Upon making her profession, Mary underwent a 40-day mystical experience which nearly ended in her death, and for the next five years she suffered through “inward desolation and temptations.” However, these trials did not prevent her from completing her duties at the convent, and even served to inspire and strengthen other members who witnessed her courageous resilience in the face of deep suffering. Mary never fully recovered her physical health, but she continued to teach and serve as a mistress to incoming and junior nuns, eventually being appointed superior in 1604. Three years later, Mary succumbed to consumption and passed away.

St. John of the Cross

Born in Spain in 1542, John grew up amidst hardship, but he didn’t let it impede his pursuit of betterment; after growing up in Avila, he studied philosophy and scholastic theology at one of Europe’s premier educational institutions at the time, the Carmelite College in Salamanca. When he joined the Carmelites as a friar at age 21, he took the name John of the Cross (Juan de la Cruz).

Shortly following his ordination, he became friends with Teresa of Avila, and joined her in efforts to reform the Carmelites, founding a new order called the Discalced Carmelites. The old order of Carmelites saw this new order as a threat, and had John arrested during the Spanish Inquisition in 1577. They kept him in solitary confinement, torturing him and barely giving him enough food to stay alive. And while many would find their souls withering in such conditions, John poured himself into a poem called The Dark Night of the Soul, which remains a classic of mystical literature.

John escaped after eight months in prison, but the life he returned to was far from tranquil: dissension plagued the monks, who jealously stripped him of his role as director. Even after the Discalced Carmelites separated into their own province, they still suffered internal discord. Amidst these troubles, John continued his writing, much of which was either unnoticed or unappreciated during his own lifetime. He died on December 14, 1591, after falling ill with a fever. Centuries later, readers around the world continue to study his writings and be encouraged and enlightened by his unique spiritual insights. 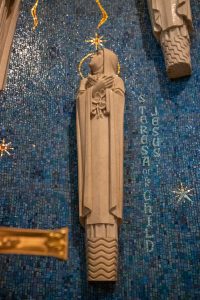 Thérѐse was born to a watchmaker in the rural town of Alençon, France in 1873. As a child, she was not very social, and at age fifteen she joined a Carmelite convent in Lisieux with her sisters. During her time at the convent, she wrote a spiritual guidebook called The Story of a Soul, describing the path to sanctity and offering practical guidelines for holy living, with reflections from her own experience. With millions of copies printed in over 38 languages, this book is now one of the top bestsellers of all time.

In Thérѐse’s book, this path to sanctity is facilitated through a constant awareness of God’s presence in all that one does – something she called “the Little Way.” Thérѐse carried this character of “littleness” into her own self-perception, viewing herself as an ordinary “Little Flower,” but treasured by God. She saw herself as serving a “vocation of love.” Yet in the face of severe physical suffering, Thérѐse displayed faithfulness and devotion that was far from ordinary. Thérѐse was plagued by tuberculosis, and the majority of her Story of a Soul book was written in the last eighteen months of her life, a time of immense pain for her. Saint Thérѐse was also committed to praying in a spontaneous, authentic way, and disliked poring over piles of books for prayers. She died from tuberculosis on September 30, 1897. She was canonized on May 17, 1925 and proclaimed a Doctor of the Church on October 19, 1997 in recognition of her profound spiritual insights. In addition to the Our Lady of Mount Carmel Chapel, Saint Thérѐse of Lisieux is also featured in the Basilica in the Saint Thérѐse of Lisieux Oratory, and the West Portico.

Letter of His Holiness Benedict XVI to the Archbishop of Florence on the Occasion of the Fourth Centenary of the Death of St. Mary Magdalene De’ Pazzi, April 29, 2007, The Vatican

10 Verses for Grandparents and the Elderly
Heralds of Triumph: The Bells of the Knights Tower Carillon