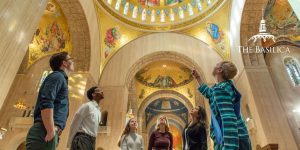 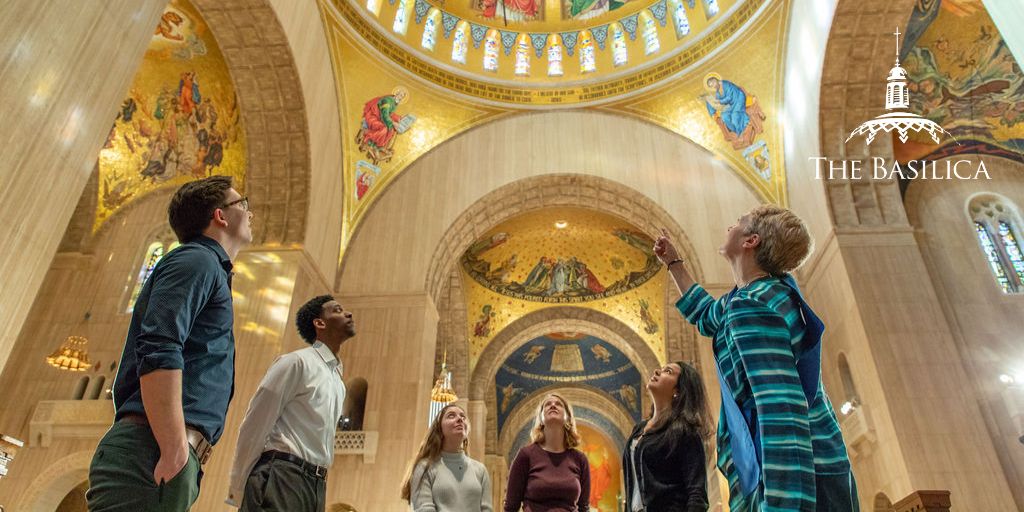 As a major pilgrimage destination, the Basilica is visited by thousands of pilgrims from around the world each year. But some of the faithful never get the chance to experience the Basilica in person. Interested in seeing America’s Catholic Church, but unable to come for a visit? We invite you to take a virtual tour of some of the Basilica’s most popular spots.

The Domes of the Great Upper Church

The Great Upper Church of the Basilica has five distinctive domes that tell the story of the gospel: the Incarnation Dome, the Redemption Dome, the Trinity Dome, the Sanctification Dome, and the Glorification Dome. The progression culminates in the Christ in Majesty Mosaic, depicting Christ reigning in glory.

The Our Lady of Guadalupe Chapel

The Our Lady of Guadalupe Chapel depicts the appearance of the Blessed Mother to St. Juan Diego in shimmering mosaic. Its brilliant blue curving walls give the viewer the impression of the apparition, while the people of the Americas are shown coming in procession to honor Mary. The chapel also features an altar which belonged to Archbishop John Carroll and was first used in 1774.

Not only is this chapel the place of repose for the Blessed Sacrament, but Popes John Paul II, Benedict XVI, and Francis all began their visits to the Basilica here. A shimmering Baldachin cascades from the ceiling, representing manna falling from heaven — God’s provision to the faithful. The ceiling is covered in gold mosaic, with saints encircling the crucified Christ.

The Crypt Church is also the best place to see the Basilica’s unique combination of Pewabic ceramics with Guastavino vaulting, a structural method of building which achieves remarkable strength through the use of a unique mortar with layers of staggered tiles. The Basilica is the only structure in the world to combine these two techniques.

At the center of the Crypt Church stands the Mary Memorial Altar, which is crafted of golden Algerian onyx, with Jesus, St. Paul, and each of the Twelve Apostles carved on the sides.

Daily Mass continues to be celebrated in the Crypt Church throughout the year.

The Our Lady of Lourdes Chapel

The Our Lady of Lourdes Chapel at the Basilica is a replica of the Grotto of Massabielle in Lourdes, France, where Mary appeared to a young girl named Bernadette Soubirous. The faithful have long sought the waters of Lourdes for healing, and the walls of this chapel depict Biblical parallels, including Moses striking the rock, Jesus healing Jarius’ daughter, and Jesus healing those at the pool of Bethesda. The intricately painted ceiling represents the invocations in the Litany of the Blessed Mother. This chapel also features a stone from the dungeon where St. Joan of Arc was imprisoned.