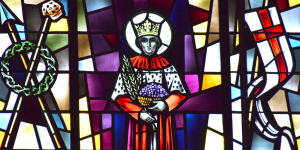 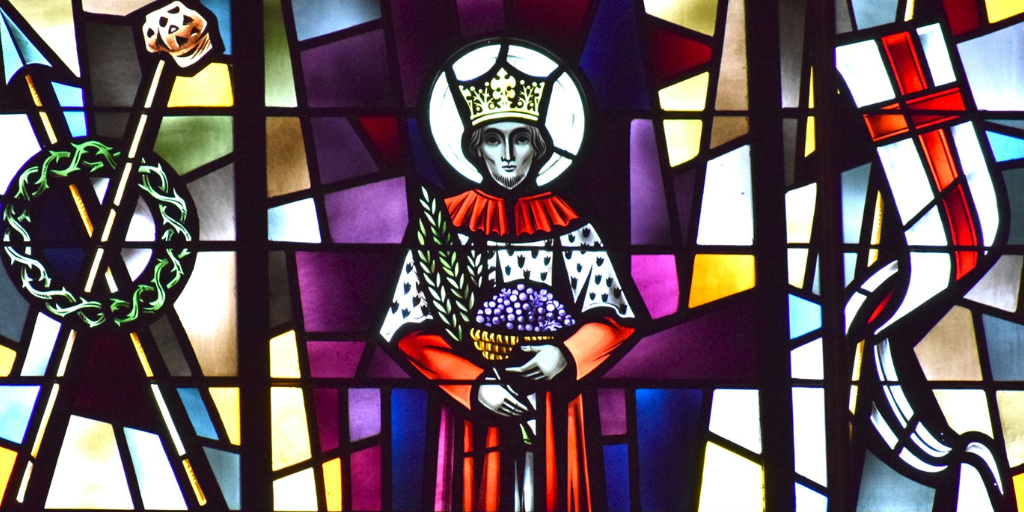 This year, the USCCB has designated September 28 as the Memorial of both St. Lorenzo Ruiz and St. Wenceslaus. These two heroes of the faith may have lived centuries apart on opposite sides of the globe, but they both shared a profound devotion to Christ. Today, we invite you to learn more about their lives, legacies, and where you can find them portrayed in the Basilica.

Lorenzo Ruiz was born on November 28, 1594, in Binondo, Manila. His Filipino mother and Chinese father were both devout Christians and each taught him their native tongue. When he grew older, he served as an altar boy and a calligrapher in their local church, and eventually joined the Confraternity of the Most Holy Rosary.

For a time, Lorenzo lived in happy tranquility: he married a Filipino woman named Rosario and they had two sons and a daughter together. But while he was employed as a clerk at the church in Binondo, something happened that would forever change the course of Lorenzo’s life: he was falsely accused of murder.

Providentially, three Dominican priests happened to be setting sail for Japan at the time, and they took Lorenzo with them to seek asylum. Along for the voyage were also a leper named Lazaro and a Japanese priest named Vicente Shiwozuka de la Cruz. Unfortunately, persecution in Japan intensified during this time– and soon after they arrived, they were arrested and imprisoned.

Two years passed by, and they were transferred to Nagasaki, where they were tortured in unspeakably cruel ways, culminating in their subjection to tsurushi on September 27, 1637. This Japanese method of torture involves hanging the victim bound upside-down over a pit, leaving one hand free to pull a rope indicating the victim’s willingness to recant and thus be set free.

Throughout the excruciating pain, Lorenzo remained steadfast in his faith until the end. He died of suffocation and blood loss on September 29 of 1637, at age 42. Missionary accounts of his death record that he spoke the following in Latin before he passed:

“I am a Catholic and wholeheartedly do accept death for God;
Had I a thousand lives, all these to Him shall I offer.”

After being canonized on October 18, 1987, he became the first Filipino saint. He is the patron of people working overseas and altar servers, and is portrayed in the Basilica in the Trinity Dome.

Born in 907 near Prague, Wenceslaus was son of the Duke of Bohemia, who was a Christian, and Drahomíra, a woman descended from a pagan tribal chief. He grew up in a time of political upheaval: while his grandmother Ludmila sought to train him in the faith, his mother backed anti-Christian forces in the realm. When Ludmilla became regent after the Duke’s death in 921, it wasn’t long before Drahomíra arranged for her to be assassinated. Upon becoming regent, Drahomíra implemented anti-Christian laws, reigning in tyranny over the faithful until rebel Christian forces successfully overthrew her five years later.

As his mother retreated into exile, 18-year-old Wenceslaus assumed the throne and soon set to work restoring order and Christianity in the nation. He welcomed German priests into the kingdom and encouraged them to practice the Latin rite rather than the Slavic rite. And at Prague Castle, he built a rotunda that would later become part of St. Vitus’ Cathedral.

Yet despite Wenceslaus’ efforts, dissension and unrest continued to plague the country, which was soon threatened by outside forces as well. After Prince Radislaus of Gurima sought to seize control of Bohemia, Wenceslaus challenged him to single combat to avoid the bloodshed of war. According to some accounts, the fight culminated in Radislaus falling to his knees in surrender after two angels appeared and shielded Wenceslaus from a javelin blow.

But Wenceslaus had not escaped all danger.

In 935, his brother Boleslaus invited him to Stará Boleslav for a celebration on the Feast of Saints Cosmas and Damian. Though historians disagree about whether Boleslaus himself was ultimately responsible, it is clear that an altercation took place there which resulted in a fight with Boleslaus’ men and Wenceslaus’ death. Thankfully, the Emperor Otto sent his forces into Bohemia and after several years of conflict, wrested control of the region from Boleslaus and undid the anti-Christian laws that had been implemented.

Today, Wenceslaus is known as the patron of the Bohemian people. You can find him portrayed in the Basilica in the Our Lady of Hostýn Chapel and the west chancel clerestory window in the Great Upper Church.

Who Are the Three Angels Named in the Bible?
A Virtual Introduction to the Basilica