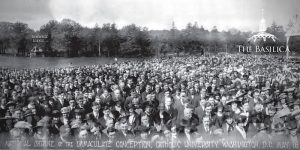 May 16, 2019 is the 99th anniversary of the blessing of the site of the future Basilica of the National Shrine of the Immaculate Conception. This significant event marked the beginning of the National Shrine’s construction process, which culminated in its dedication in 1959, and final completion in 2017 with the installation of its crowning jewel, the Trinity Dome.

In many ways, this was the first pilgrimage to the National Shrine, as Catholic groups from across the country gathered to witness the event.

Bishop Thomas J. Shahan, who presented to Pope Piux X a plan to build a national church in honor of the Blessed Virgin Mary in Washington seven years prior, delivered the homily during this historic Mass. The Rev. Dr. A. L. Gabert, professor of Plain Chant at the University, directed a choir of 487 voices that included members of the affiliated religious communities of the University and 100 children from St. Vincent’s Orphanage.

The altar used at the Mass was used by the first Catholic bishop of the United States, Bishop John Carroll, and dated to 1774. This altar was used for many significant events to follow, including the the Benediction of the foundation stone on September 23, 1920, and the first Mass celebrated at the National Shrine on April 20, 1924.

As we mark the 99th anniversary of the blessing of the land, we look forward to celebrating more moments of historical significance in the life of the Basilica of the National Shrine of the Immaculate Conception as we prepare for the Centennial of America’s Catholic Church in 2020.

3 Marian Prayers of Protection & Hope
Prayer, Peace, and Penance: The Message of Our Lady of Fatima