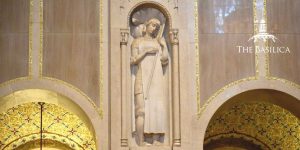 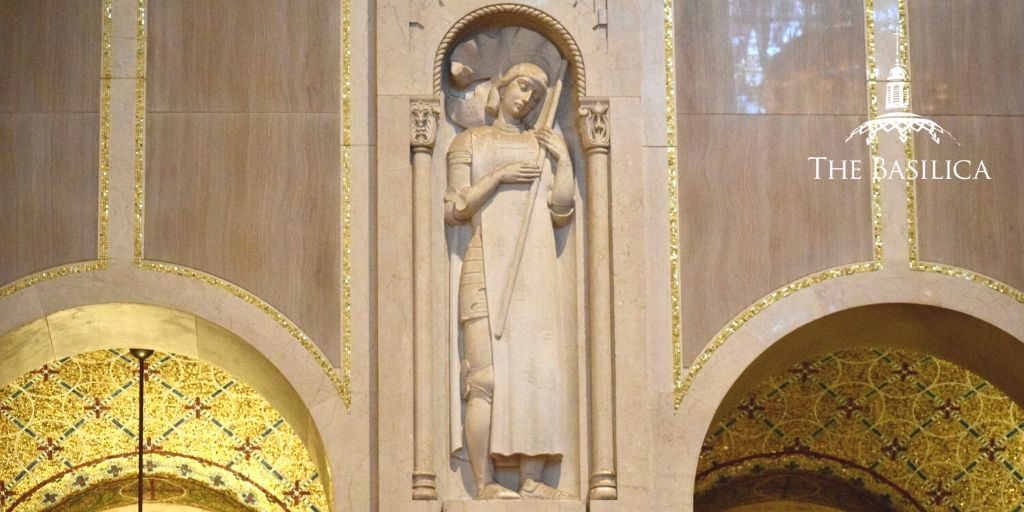 One hundred years ago, on May 16, 1920, Saint Joan of Arc was canonized. This woman’s legendary bravery has earned her recognition as one of the most famous female warriors of all time. With passionate convictions, she led France to military victory during a time of massive turmoil while still in her teens. Though she faced a tragic early death, the church eventually recognized her heroic faith. Saint Joan of Arc is depicted on the Southwest Nave Bay of the Basilica, and the Our Lady of Lourdes Chapel houses a stone from the dungeon where she was held in 1431.

Saint Joan of Arc at the Basilica

Saint Joan of Arc has a special tie to the Basilica: the day of her canonization, May 16, 1920, was the same day that the land for the National Shrine was blessed. The Our Lady of Lourdes Chapel contains a white marble stone from the dungeon in which she was imprisoned before her execution, with a depiction of her coat of arms and the inscription, “This stone formed part of the dungeon of St. Joan of Arc, Rouen, France [1431].”

Saint Joan of Arc is also depicted on the Southwest Nave Bay, dressed in armor and a scapular adorned with fleur-de-lis. She holds a standard with the names of Jesus and Mary.

When Joan of Arc was just 13, she received a miraculous vision in which the Archangel Michael and two women saints encouraged her to help restore the dauphin (the king of France’s eldest son) to the throne. At first, she was not taken seriously when she offered her assistance, but eventually the dauphin accepted her help. Joan became a military commander, helping the struggling army break a siege on Orleans and leading them in a series of impressive victories. She became known as the “Maid of Orleans,” and when the dauphin was restored to the throne in 1429, Joan lived as a member of the royal court. She was also granted a coat of arms for her heroic actions.

In a later military conflict, Joan was captured by the rebels of Burgundy and sold to England. There, she was imprisoned and subjected to constant interrogation as an ecclesiastical court tried to convict her of heresy. When the court could find no fault with her theology, she was eventually convicted for wearing men’s clothing. On May 30, 1431, 19-year-old Joan was burned at the stake.

Two decades later, her family petitioned to have her case retried, and she was declared innocent. This year marks the centennial of her canonization, as well as the centennial of the Basilica. We invite to mark your calendars for September 20, as we celebrate 100 years since the laying of the foundation stone.

Why Do We Observe the Solemnity of the Ascension?
100th Anniversary of the Blessing of the Land