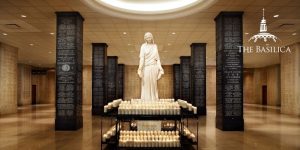 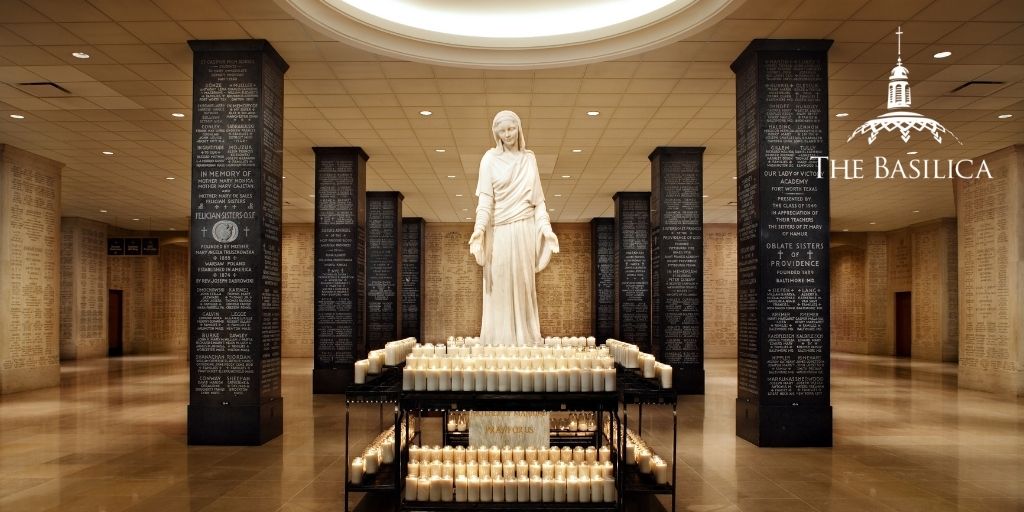 Did you know that Memorial Hall features 14,400 tablets of marble and granite inscribed with the names of National Shrine supporters? Memorial Hall presents a historical record of events and people within the American Church, including the individuals, families, and religious communities that helped fund the construction of the National Shrine. The eight foundation piers record the names and events of “firsts” in the Catholic Church in the United States – such as the first American saint to be canonized, the founders of Catholic University of America and Georgetown University, and others.

We invite you to take a virtual tour of Memorial Hall and bask in its quiet solitude, remembering the supporters of the faith that helped make Mary’s Shrine a reality for millions of Catholics today.

The Mary, Mother of Mankind statue stands as the focal point of Memorial Hall, reminding us of Mary’s motherhood over all the human race. It was the first work of art commissioned by the National Shrine and was unveiled on May 8, 1937 – the day before Mother’s Day.

The five bronze statues in Memorial Hall pay tribute to the faithful who were instrumental in the life of the Basilica and American Catholicism, including: Bishop Thomas Shahan, the Founder of the National Shrine; Archbishop John Francis Noll, who played a significant role in facilitating the completion of the National Shrine; St. Vincent Pallotti, founder of the Pallottine order, and James J. Norris, an ardent advocate for the poor who assisted Mother Teresa and spoke at Vatican II. Last but not least is the sculpture of St. Peter. In 1925, Bishop Shahan purchased this sculpture in Rome, and a year later, he brought it to the Shrine. It is a scaled replica of the statue in the Basilica of St. Peter in Vatican City.

Why Did Esau Trade His Birthright for Stew?
Virtual Tour: Our Lady of Lebanon Chapel