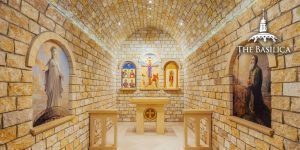 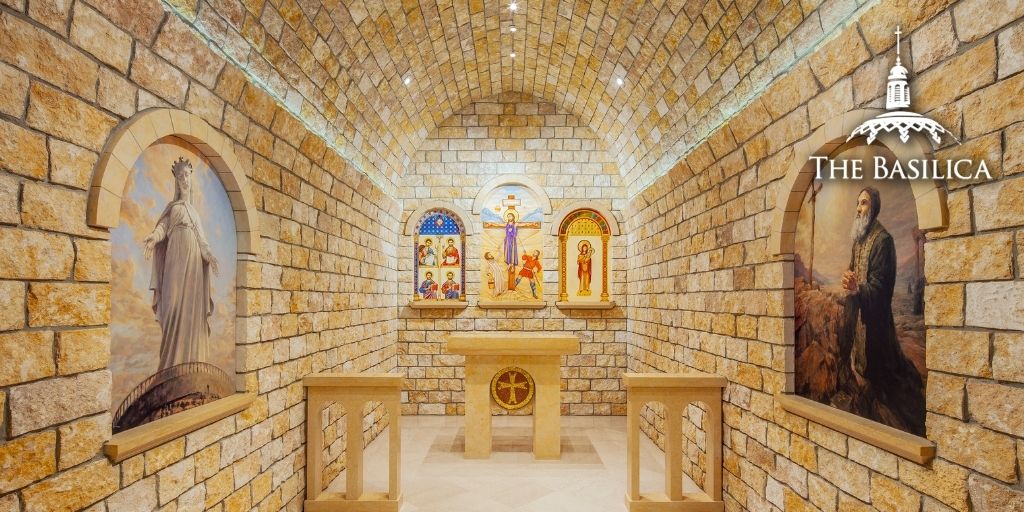 Did you know that the Basilica has a chapel dedicated to Our Lady of Lebanon? This transportive space features a unique design of stone bricks that is evocative of the early churches of Lebanon.

St. Maron and the Faith

Inside, the chapel features the prominent hermit-monk St. Maron (A.D. 350-433) in a painting on the right wall by Cameron D. Smith (2011). The namesake of the Maronite Christians, St. Maron was a mystic whose ascetic lifestyle attracted many followers in Syria and Lebanon. He was also known to have the gift of physical and spiritual healing, and is referred to in the writings of Church fathers Chrysostom and Theodoret of Cyrus.

On the left wall is a painting of Our Lady of Lebanon, also by Smith (2011), which features the Blessed Virgin standing atop the Shrine in Lebanon.

The Cedar Tree of Lebanon

In the center of the chapel floor is a mosaic of the Cedar Tree of Lebanon, a stately and majestic evergreen that symbolizes endurance, eternal life, incorruptibility, and also Mary (Song of Songs 5:15) and Jesus (Ezekiel 17:22). Treasured as a source of wealth, its timber was used to build the Temple of Solomon. Here, the marbles used in the mosaic are Verde Antico (tree); Rosso Assiago (trunk, branches, and border); and Giallo Siena (background).

The chapel also has multiple works of art in the “Rabbula” style, an artistic legacy taken from the Rabbula Gospels, the earliest known illuminated manuscript of the gospels written and illustrated in A.D. 586 and signed by the scribe Rabbula. On the wall behind the altar are three Rabbula-styled works of art by Maria Luisa Santamaria: a portrayal of the four evangelists (left), the Mother of the Light (right), and Christ Robed in Glory (center). The chapel also includes a Venetian gold frontal cross – the Qurbono Cross or the Cross of the Maronite Divine Liturgy, which is commonly found in the ancient churches of Syria and Lebanon. Because it is also found in the Rabbula gospels, it is sometimes referred to as the “Rabbula Cross.” It is a concave Cross Pattée which means the arms of the cross are narrow at the center and broader at the perimeter.

The Maronite Church is in communion with Rome, and this chapel observes the Maronite Rite of celebrating the sacraments, with Aramaic as the liturgical language. With the addition of this chapel, the National Shrine is now a “tri-ritual” house of worship. Bishop Mansour consecrated and dedicated the chapel according to the Maronite Rite on September 23, 2011.

You can explore the chapel in 360° below!

In honor of Our Lady of Lebanon, we invite you to light a candle today at the National Shrine. Vigil candles burn in the chapels throughout the Great Upper Church and lower crypt level of the National Shrine. Each candle represents the faith of the supplicants and their fervent prayers entrusted to the loving intercession of the Blessed Mother.