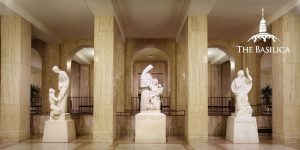 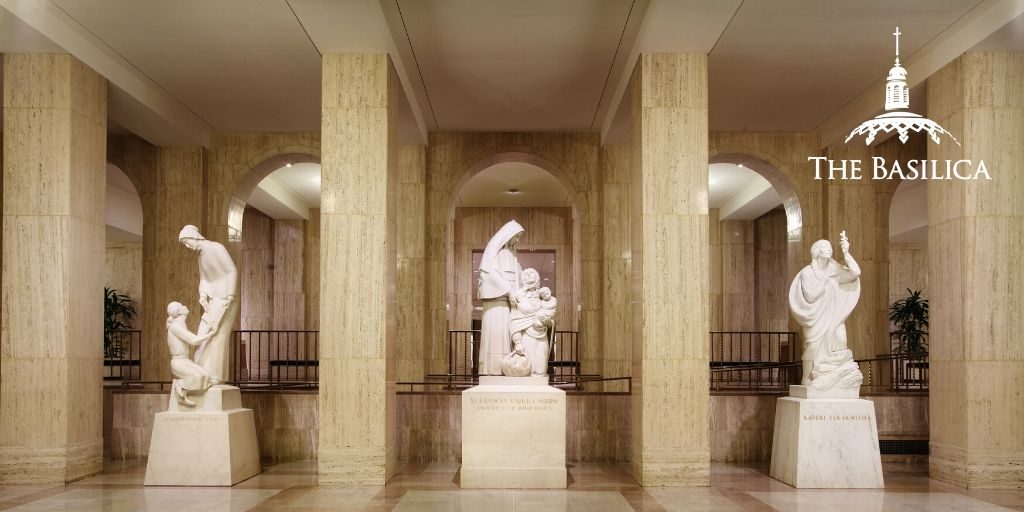 The National Shrine reflects the ethnic and cultural diversity of the United States and the unity and universality of the Catholic Church. As we enter the month of July, we celebrate the many ways the Basilica honors our American heritage and the faithful of the United States in its sacred art and architecture. This Independence Day, we are proud to highlight the stories of four American saints depicted in the Basilica’s Hall of American Saints.

The ​first native-born American citizen to be canonized as a saint, Elizabeth Ann Seton is best known for her role in starting children’s parochial education in America. ​Born on August 28, 1774, on Staten Island, Elizabeth was originally raised in the tradition of the Episcopalian church. After spending time in Italy, she was struck by the beauty of Catholicism, and converted in 1805. Following her husband’s premature death, Elizabeth started a Catholic school for girls in Baltimore, Maryland, at the request of a priest. Elizabeth’s most lasting impact, however, was the founding of the Sisters of Charity of Saint Joseph’s in 1809 – the first religious order in America. This order helped hospitals and orphans, but its most prominent work was in establishing the parochial education system in America. Elizabeth’s devotion to educating children and caring for the less fortunate has had an impact lasting well beyond her own life.

Mother Elizabeth Ann Seton is depicted on the exterior tympana of the West Façade, the Hall of American Saints, Miraculous Medal Chapel window, Our Lady of Guadalupe Chapel, and the Trinity Dome Mosaic.

In 1946, Saint Frances Xavier Cabrini, the “mother of women’s missions,” became the first American citizen to be canonized. As a young girl in Italy, she would dress her dolls as nuns and send them down the river in boats as “missionaries.” What made this dream even more extraordinary is that during this period, the Church had no female missionaries. But Frances changed that; when she grew up, she began the first institute for female missionaries: the Missionary Sisters of the Sacred Heart. Within a decade, it was recognized by Rome. At age 30, she immigrated to New York City and founded orphanages in Little Italy, caring for over 400 orphans rescued from the city streets.

The Missionary Sisters of the Sacred Heart later established a variety of Catholic institutions throughout Europe and the Americas. In her lifetime, Frances traversed the ocean 39 times, founding over 60 missions across Europe and the Americas. She is the patroness of immigrants and is portrayed in the Basilica in the west portico, the Guadalupe Chapel, the Trinity Dome mosaic, and in a sculpture in the Hall of American Saints.

Saint Katharine Drexel was the second American-born saint to be canonized and is known for her commitment to racial justice and her educational efforts for minority groups in America.

Katharine was born into an affluent Philadelphia banking family in 1858. During her family’s travels across the western United States, Katharine was struck by the poor living conditions endured by Native Americans on reservations. She felt strongly that something needed to be done, so she used her inheritance to establish the Sisters of the Blessed Sacrament in 1913. She was an unflagging advocate for minorities, crusading for better educational opportunities and standing against racial discrimination and injustice. In 1894, she opened the first mission school for Native Americans in New Mexico, and in 1915, she founded Xavier University, an institution of higher learning for African Americans in New Orleans.

By the start of World War II, she had founded schools for African Americans in 13 states, and 50 mission schools for Native Americans in 16 states. Katharine lived to be 97, and was canonized in 2000. She is the patroness of racial justice and philanthropists and is portrayed in the Hall of American Saints, the Trinity Dome, and the lower church sacristy.

Saint Kateri Tekakwitha was the first indigenous American to be canonized as a saint. Known as the “Lily of the Mohawks,” she is the patroness of ecology and environment. Born to a Mohawk chief in 1656, Kateri was left an orphan at age four after an epidemic of smallpox took both her parents and her brother. She was raised by her uncle in a Mohawk tribe community, and in 1676, Kateri was baptized by Father Jacques de Lamberville, a Jesuit missionary. Kateri became a devoted Christian, and at age 19, she took a vow of chastity. While her exemplary piety served as an inspiration to some of those around her, others harassed her because of her faith.

Seeking a less hostile environment, she moved to the settlement of the Mission of St. Frances Xavier, a community of Christian indigenous Americans living near what is now Montreal. There, she grew in faith and holiness, spurred on by an unquenchable zeal for Christ, living in prayer and penitence. Only five years later, however, she was called home by the Lord, passing away at the young age of 24 on April 17, 1680. Her last words were: “Jesus, I love you.” Saint Kateri is portrayed in the Hall of American Saints in a Vermont marble statue, the Trinity Dome, and the southwest nave bay in the upper church.

The Unwavering Devotion of Saint Thomas the Apostle
Faces of the Basilica: An Interview with Sophia