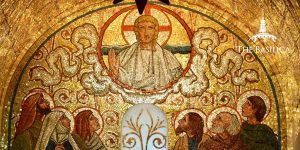 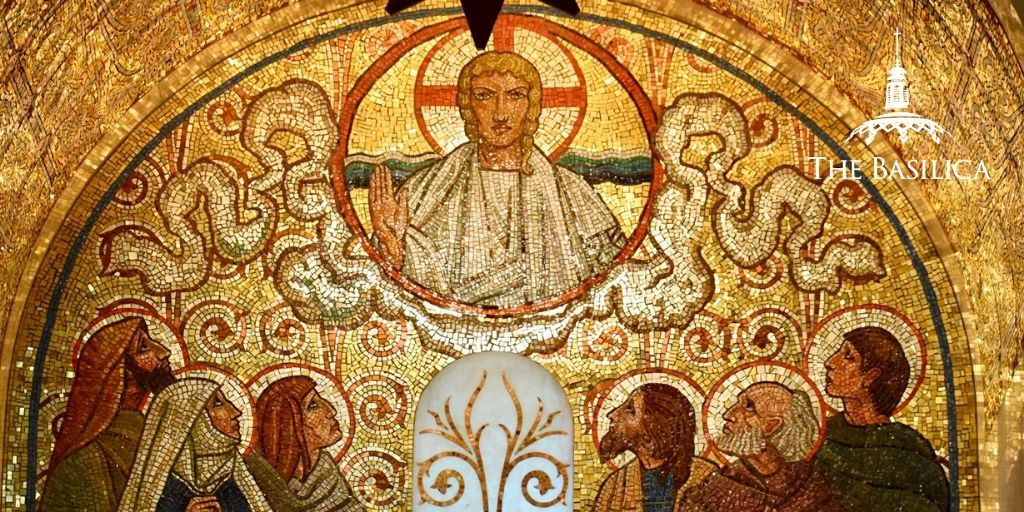 So then the Lord Jesus, after he spoke to them, was taken up into heaven and took his seat at the right hand of God. But they went forth and preached everywhere, while the Lord worked with them and confirmed the word through accompanying signs.
– Mark 16:19

On May 24, we celebrate the Solemnity of the Ascension of the Lord. After Jesus’ resurrection, the time came for him to return to heaven to prepare a place for us, as his earthly ministry had been fulfilled. The Ascension serves as an ultimate demonstration of Jesus’ power over death, inaugurating his reign over heaven and earth as the Living King. This Glorious Mystery is portrayed in the Basilica in the Ascension Chapel, the Great Upper Church Sacristy, and the Rosary Walk and Garden.

What is Significant about the Ascension?

Acts 1:6-11 describes the Ascension and Jesus’ final words to his disciples before he returned to his Father:

When they had gathered together they asked him, “Lord, are you at this time going to restore the kingdom to Israel?” He answered them, “It is not for you to know the times or seasons that the Father has established by his own authority. But you will receive power when the holy Spirit comes upon you, and you will be my witnesses in Jerusalem, throughout Judea and Samaria, and to the ends of the earth.” When he had said this, as they were looking on, he was lifted up, and a cloud took him from their sight. While they were looking intently at the sky as he was going, suddenly two men dressed in white garments stood beside them. They said, “Men of Galilee, why are you standing there looking at the sky? This Jesus who has been taken up from you into heaven will return in the same way as you have seen him going into heaven.”

But Jesus did not leave them alone in this Great Commission; not in the least. He promised to send a “helper” to strengthen and intercede for all his followers: the Holy Spirit. It was, and is, the Holy Spirit who guides the Church and fills Jesus’ followers with his power, enabling them to share the Gospel until the day Jesus returns. As Pope John Paul II has explained, when Jesus ascended into heaven, two significant events in particular happened: Jesus gave his followers instructions on how they were to live, and he left them with a promise. He directed the disciples to spread the message of the Gospel to the ends of the earth, declaring the good news of salvation.

The power of the Ascension lies in the great triumph of Jesus over sin and death, as he invites us to share in the redemptive new life that we may have in him. Pope John Paul II has remarked:

Dear sons, be imbued with the hope that is so much a part of the mystery of the Ascension of Jesus. Be deeply conscious of Christ’s victory and triumph over sin and death. Realize that the strength of Christ is greater than our weakness, greater than the weakness of the whole world. Try to understand and share the joy that Mary experienced in knowing that her Son had taken his place with his Father, whom he loved infinitely. And renew your faith today in the promise of our Lord Jesus Christ, who has gone to prepare a place for us, so that he can come back again and take us to himself.

The Ascension Chapel at Basilica

In the Great Upper Church, Jesus’ ascension into heaven is portrayed in mosaic tile in the Ascension Chapel. The panel depicts Jesus rising to take his heavenly seat at the right hand of the Father, his work on earth completed. Below this scene is a depiction of the Old Testament parallel of Elijah riding to heaven in a flaming chariot after imparting the spirit of prophecy to his disciples (2 Kings 2:1-15). Joining the two scenes is the verse from the Gospel of John: “I ascend to my Father and your Father,” (20:17).

May the promise of Jesus’ ascension fill us with hope as we eagerly await the day of his return. As Pope John Paul II has remarked:

The efficacy of Christ’s Ascension touches all [of] us in the concrete reality of our daily lives. Because of this mystery it is the vocation of the whole Church to wait in joyful hope for the coming of our Savior, Jesus Christ.

In honor of the Solemnity of the Ascension, we invite you to light a candle today at the Basilica. Vigil candles burn in the chapels throughout the Upper Church and lower crypt level of the National Shrine. Each candle represents the faith of the supplicants and their fervent prayers entrusted to the intercession of the Blessed Mother.

Light a candle
What Happened at Pentecost?
The National Shrine’s Connection to Saint Joan of Arc