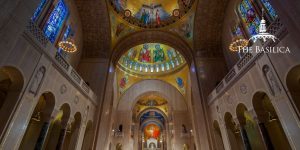 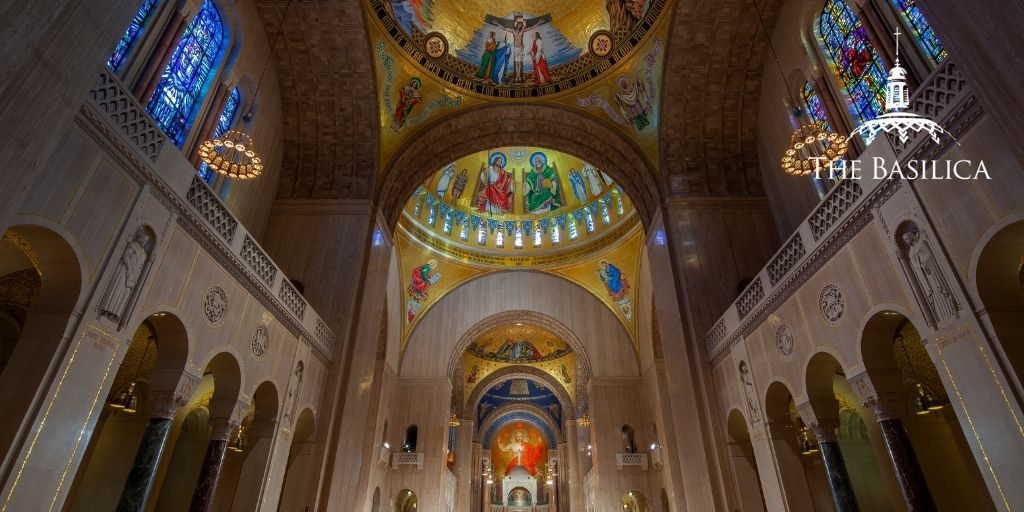 The Great Upper Church of the Basilica of the National Shrine of the Immaculate Conception is composed of five distinctive domes which form a timeline of the New Testament: the Incarnation Dome, the Redemption Dome, the Trinity Dome, the Sanctification Dome, and the Triumph of the Lamb Dome. These domes lead directly to the North Apse, where Christ in Majesty is depicted in a 3610 square-foot mosaic. According to John de Rosen (1891-1982), the art consultant for the National Shrine:

As in St. Mark’s in Venice, the chief characteristics of the interior of the Shrine are a succession of decorated domes. Each dome is a unit in itself, leading to the last half dome of the apse of the church, the Christ in Majesty.

Although each dome is different, the Trinity Dome unifies all five into a coherent storyline, ending with the Christ in Majesty mosaic in the North Apse. First, the Incarnation Dome depicts the moment at which Christ entered this world and was made manifest. The Redemption Dome depicts the story of how Christ redeemed us through his death and resurrection. The Trinity Dome encompasses the great mystery of our faith, the Most Holy Trinity, with the Blessed Virgin Mary, angels and saints, encircled by the Nicene Creed. The Sanctification Dome portrays the Descent of the Holy Spirit, when the apostles were equipped with the power of the Holy Spirit to go out and preach the Gospel to the ends of the earth. The Triumph of the Lamb Dome depicts the prophecies of the Book of Revelation in which the Lamb, Christ, and his Church, will triumph. This dome naturally leads to Christ in Majesty, the mosaic of Christ in all his glory as he will appear at the end of our world.

The first dome in the path to the Christ in Majesty mosaic, the Incarnation Dome was dedicated on November 17, 2007. Spanning 3,780 square feet, it divides into four quadrants, which depict the Annunciation, the Nativity, the Wedding Feast at Cana, and the Transfiguration. Its four pendentives portray Jeremiah, Isaiah, the Matriarch Sarah, and the Prophet Micah, and the base of the dome is encircled with the passage: “The Word was made flesh and dwelt among us. And we saw his glory – glory as of the only Begotten of the Father, full of grace and truth.” (John 1:14) The dome’s mosaic was designed by Leandro Miguel Velasco of Rambusch Decorating Co., the same company which recently designed the Trinity Dome. Travisanutto Co., from Spilimbergo Italy, manufactured the dome, as well as the Trinity Dome.

The second dome on the path to the Christ in Majesty mosaic, the Redemption Dome was dedicated on November 16, 2006. It is the exact size of the Incarnation dome, and also splits into four quadrants, which depict four redemptive acts of Christ: the Temptation in the Desert, the Crucifixion, the Descent into Hell, and the Resurrection from the Dead. The four pendentives portray significant persons from these biblical accounts: Lazarus, Simon of Cyrene, Joseph of Arimathea, and Mary Magdalene. The base of the dome is encircled with the passage: “Worthy are you to receive the scroll and to break open its seals, for you were slain and with your blood you purchased for God those from every tribe and tongue, people and nation.” (Revelation 5:9)

The third dome on the path to the Christ in Majesty mosaic, the Trinity Dome was dedicated on December 8, 2017. Covering a stunning 18,300 square feet, it is the central and largest dome of the National Shrine. It depicts the Most Holy Trinity, the Blessed Virgin Mary as the Immaculate Conception, and a procession of saints who have an association with the United States and the National Shrine. The base of the dome is encircled with the Nicene Creed, and the four pendentives portray the four Evangelists: Matthew, Mark, Luke, and John.

The fourth dome on the path to the Christ in Majesty mosaic, the Sanctification Dome was dedicated in the year 1968. With bold reds and golds, it portrays the famous scene of Pentecost, the Descent of the Holy Spirit. Spanning 3,950 square feet, it is made up of over 1.25 million pieces of glass. The four pendentives display people from Africa, Asia, Europe and America, symbolizing the sanctification of the world by the Holy Spirit. The dome has a different style than the first three, as it was designed by Max Ingrand, a famous glass worker based out of Paris, France. Ravenna Mosaic Co., based in Missouri and New York, manufactured the piece.

The Triumph of the Lamb Dome

Also known as the Glorification Dome, this fifth dome is the closest in proximity to the Christ in Majesty mosaic and was dedicated in the year 1966. Covering an area of 3,340 square feet, it is centered around an apocalyptic theme, featuring the lamb with seven horns and seven eyes at the center and an open scroll at its feet. Twenty-four elders dressed in white and wearing gold crowns form the image of a Greek cross. They are separated by four living creatures: a lion, an eagle, an ox, and a man. Each of the four pendentives depicts an angel holding a quarter of the earth, illustrating the Kingship of Christ. Instead of wrapping around the base of the dome like the others, the message of this dome splits into each of the four quadrants. Each one contains a statement from the hymn of the elders, the living creatures, and the myriad of angels. Although this dome had a different designer than the Sanctification Dome, both were manufactured by Ravenna Mosaic Co., lending the two domes an artistic similarity.

What is the ultimate purpose of these domes? As Pope John Paul II once said in Article 12 of his ‘Letter to Artists’:

In order to communicate the message entrusted to her by Christ, the Church needs art. Art must make perceptible, and as far as possible attractive, the world of the spirit, of the invisible, of God. It must therefore translate into meaningful terms that which is in itself ineffable. Art has a unique capacity to take one or other facet of the message and translate it into colors, shapes and sounds which nourish the intuition of those who look or listen. It does so without emptying the message itself of its transcendent value and its aura of mystery.

The Samaritan Woman: New Life in Christ
Honoring Our Lady of Altötting at the Basilica