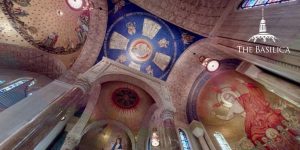 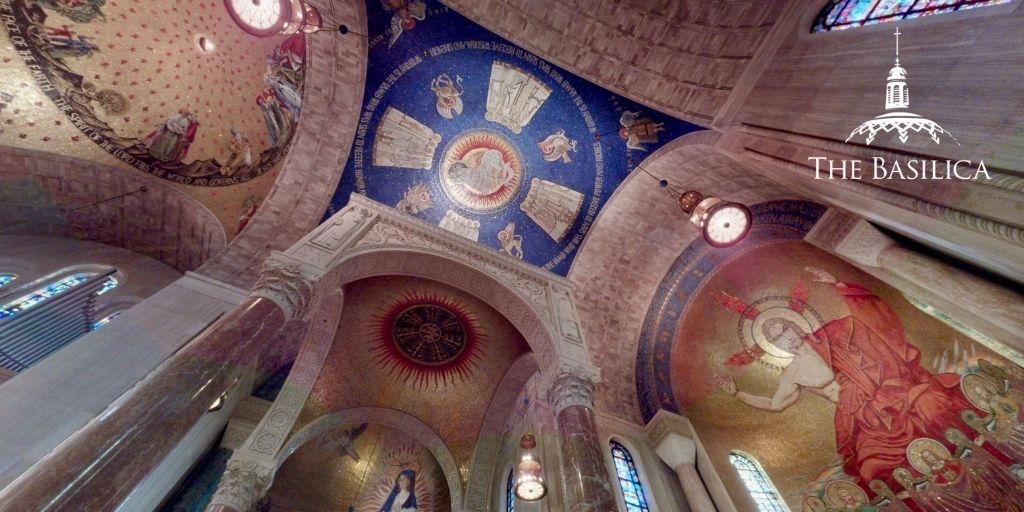 Spanning 3,340 square feet, The Triumph of the Lamb dome mosaic is the culmination of the five domes in the Great Upper Church, depicting Christ’s victorious second coming. Today we invite you to learn about the significance of this resplendent work of sacred art that so magnificently brings to life the mysteries of Revelation.

At the center is the lamb with seven horns, seven eyes, and an open scroll at its feet, reflective of Revelation 5:1–6:

Then I saw standing in the midst of the throne and the four living creatures and the elders a Lamb that seemed to have been slain. He had seven horns and seven eyes; these are the [seven] spirits of God sent out into the whole world.

Forming a bold Greek cross are the 24 elders, in four groups of six, dressed in white and wearing gold crowns. Between each group are the four living creatures mentioned in Revelation 4:6–8

In front of the throne was something that resembled a sea of glass like crystal.

In the center and around the throne, there were four living creatures covered with eyes in front and in back. The first creature resembled a lion, the second was like a calf, the third had a face like that of a human being, and the fourth looked like an eagle in flight. The four living creatures, each of them with six wings, were covered with eyes inside and out. Day and night they do not stop exclaiming:

In each corner, the Kingship of Christ is illustrated by depictions of angels each holding a quarter of the earth. Each quadrant of the dome contains a statement from the hymn of the elders, the living creatures, and the myriad of angels as described in Revelation 4:11; 5:12–13:

“Worthy are you, Lord our God,
to receive glory and honor and power,
for you created all things;
because of your will they came to be and were created.”

… and they cried out in a loud voice:

“Worthy is the Lamb that was slain
to receive power and riches, wisdom and strength,
honor and glory and blessing.

Then I heard every creature in heaven and on earth and under the earth and in the sea, everything in the universe, cry out:

“To the one who sits on the throne and to the Lamb
be blessing and honor, glory and might,
forever and ever.”

The mosaic design is by Millard Owen Sheets, and the mosaic was manufactured by Ravenna Mosaic Co. It is the gift of Polish Americans, through the episcopal committee for the Chapel of Our Lady of Czestochowa (1966).

Enjoy 360° views of the Triumph of the Lamb mosaic in the image below from our virtual tour.

The Perfect Love of God
The 2021 Lenten Reflection Series Schedule