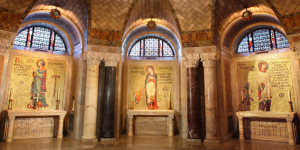 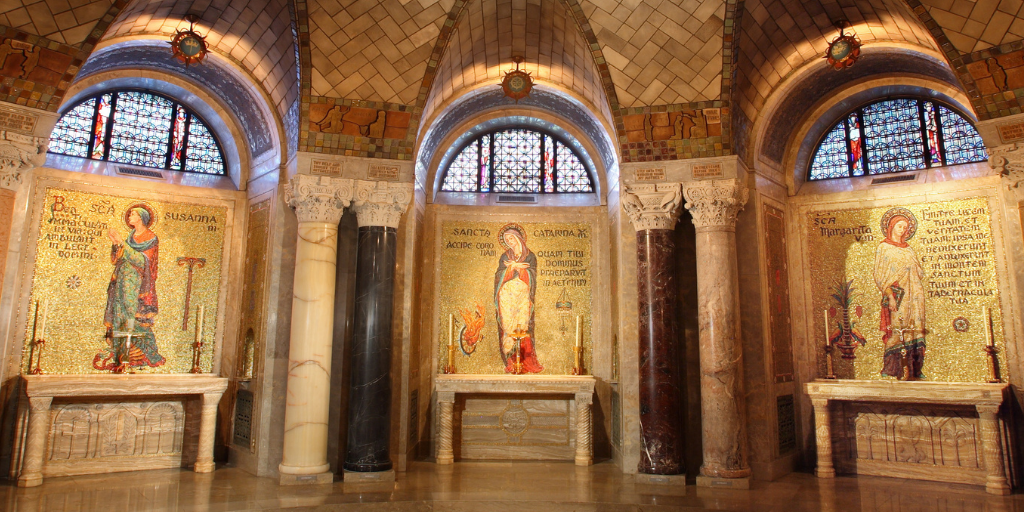 Did you know that the Crypt Church took nearly seven years to complete? Considered the heart of the Basilica, it honors 15 saints in glittering gold mosaic chapels, celebrating centuries of Catholic tradition through the lives of the faithful. In our Saints of the Crypt Church series, we highlight the stories of each of these saints, inviting you to explore how they are honored in the Basilica with our immersive virtual tour. This post is Part I in a series. View Part II and Part III.

Today, we uncover the stories of the saints of the East Apse – five women whose bravery and commitment to the cross continue to inspire Catholics around the world today.

Saint Brigid is believed to have been born in A.D. 450 near Dundalk, and was raised by druids. She entered a convent at an early age and eventually became the founder of the “double monastery” system, combining men and women in one religious community. Some accounts hold that Brigid was baptized by Saint Patrick. As an abbess, she likely wore a ring and bore the crosier and mitre as a symbol of her office and rank. Both of these items are portrayed in the mosaic and the altar frontal. A replica of the Cross of Cong, the crucifix on the altar is an example of Irish medieval art.

The altar is set off by reredos, inscribed with Latin text which translates:

“This is a wise virgin and one numbered among the prudent.”

Not only is Saint Brigid the patron saint of Ireland, but her patronage also includes babies, blacksmiths, midwives, and single mothers.

Saint Margaret of Antioch was a shepherdess and the daughter of a pagan priest. Upon her conversion to Christianity, her father disowned her. Legend holds that the devil appeared to Margaret as a dragon and swallowed her – but the cross she bore so irritated its gullet that it spat her out. This is reflected in the design of the altar frontal, which features a cross draped in chains with a dragon below. The Latin text on the mosaic translates:

“Send your light and your fidelity, that they may be my guide; Let them bring me to your holy mountain, to the place of your dwelling.” – Psalm 43:3

After facing trial for being a Christian, she was beheaded. Among her patronage are expectant mothers, people with kidney disease, nurses, and people falsely accused.

According to various texts, following the death of her mother, Saint Catherine of Alexandria devoted herself to a life of study and prayer. After converting to Christianity, Catherine pleaded with her suitor, Emperor Maxentius, to cease his persecution of the Christians. In response, he challenged her to debate the best of his philosophers, but her intellect was so great that her scholarly adversaries converted to Christianity. Angered by her victory and refusal to marry him, the emperor condemned her to death on a spiked breaking wheel, but at her touch, the wheel shattered. She was beheaded ca. A.D. 305 in Alexandria, Egypt. The mosaic and altar frontal show a flaming wheel and an open book. The altar appointments also carry the theme of her martyrdom.

“Receive the crown which the Lord has prepared for you in eternity.” – Common of Virgins, Vespers

Saint Catherine of Alexandria is known as the patroness of philosophers, theologians, apologists, archivists, students, and those who work with a wheel.

Saint Susanna of the “Eternal City”

A niece of Pope Caius, Saint Susanna was martyred during the reign of the Emperor Diocletian (A.D. 284-305). Although she is commemorated in many ancient accounts, no reliable source documenting her experiences survives. In 1969, her feast was dropped from the Universal Calendar of the Church, but the Basilica of Saint Susanna in Rome, which was also the titular church of Cardinal Cushing (1958-70), maintains the feast. In this depiction, Susanna holds a sword and two palm branches, both of which are considered attributes of martyrdom.

“Happy are those whose way is blameless, who walk by the teaching of the Lord.” – Psalm 119:1

Born in Sicily in the fourth century, St. Lucy converted to Christianity after her blind mother recovered her eyesight. She was martyred at a young age under the persecution of the Emperor Diocletian. The exact reason is uncertain, but tradition holds that a spurned suitor reported her to the governor, who had her killed for her faith. Another tradition holds that, as part of her torture, she was blinded, but her eyesight was miraculously restored. For this reason, she is the patron saint of eyesight.

“Fair speech has graced your lips, for God has blessed you forever.” – Psalm 45:3

Lucy is the patron of the blind, ophthalmologists, and all who suffer from eye disease. The Church commemorates Saint Lucy in Eucharistic Prayer I.

The man who defeated Gnosticism: St. Irenaeus
Miriam: the Woman Who Helped Save a Nation