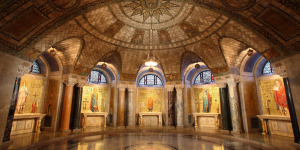 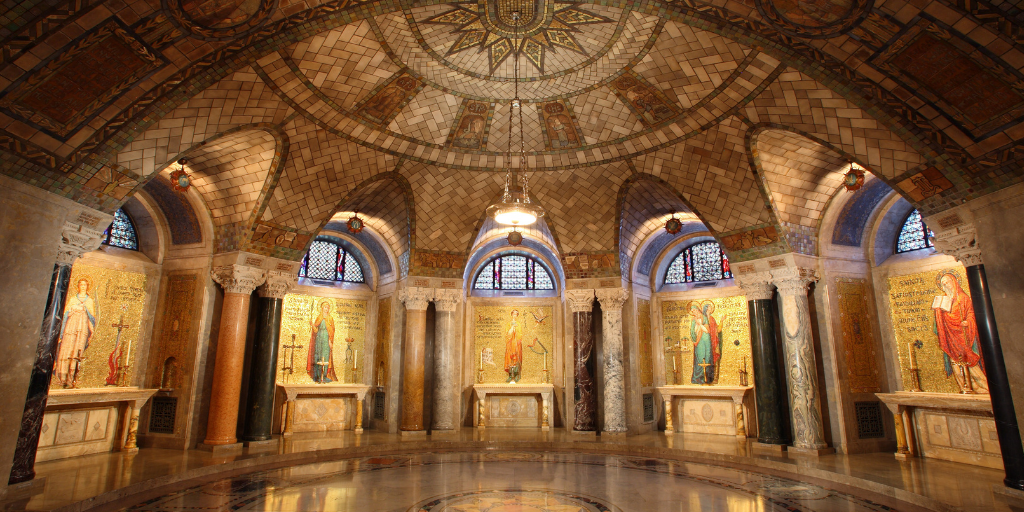 Did you know that the Crypt Church took nearly seven years to complete? Considered the heart of the Basilica, it honors 15 saints in glittering gold mosaic chapels, celebrating centuries of Catholic tradition through the lives of the faithful. In our Saints of the Crypt Church series, we highlight the stories of each of these saints, inviting you to explore how they are honored in the Basilica with our immersive virtual tour. This post is Part II in a series. View Part I and Part III.

Today, we uncover the stories of the saints of the West Apse – six women who are remembered in the Eucharistic Prayer I, and whose courageous examples of faith continue to inspire Catholics across the world.

A woman of profound faith, Saint Anastasia suffered martyrdom in the fourth century during the persecutions of the Roman Emperor Diocletian. After several attempts to make Anastasia deny her beliefs, authorities burned her to death. Though little more is known about her life, her bravery remains a testament of steadfast faith to this day.

In the St. Anastasia Chapel at the Basilica, the altar frontal is carved with the symbols of her martyrdom: a stake and a chain. The Latin citation in this chapel is from the Prayer after Communion and translates:

“O Lord, you have filled your family with sacred gifts.”

Anastasia is known as the patroness of weavers and widows.

When Saint Perpetua, a young noblewoman, and her slave, Saint Felicity, converted to Christianity, they suffered much adversity, and were eventually martyred in the arena in Carthage in A.D. 203. The historical account of their imprisonment is particularly notable, as most of it was written by Perpetua before her death, making it one of the earliest surviving writings by a Christian woman.

In the St. Perpetua and Felicity Chapel, a shimmering mosaic portrays the women embracing, framed by a flower and a ladder that leads to an oasis. The altar frontal shows a sword and the silhouettes of seven young men, representing Felicity’s martyred sons. Before her execution, she gave birth to her last son, remarking:

“Another will be within me, who will suffer on my behalf, seeing that it is for Him that I am to suffer.”

The Latin version of the text is inscribed in the chapel in the Basilica.

The patroness of music, musicians, instrument makers and poets, Saint Cecilia has been venerated since the 4th century. Although she married at her father’s request, Cecilia lived her vow of virginity and converted her husband (Saint Valerius) to Christianity. According to tradition, the Sicilian emperor Marcus Aurelius (ca. A.D. 176-180) attempted to execute her multiple times without success. When executioners failed to suffocate her, they tried to behead her on three separate occasions. With her head partially severed, Cecilia struggled to live until her wealth was distributed to the poor.

The motif of music is reflected in the Basilica’s St. Cecilia Chapel in both the marble altar and the mosaic, which each feature lyres. The mosaic also includes a crown of flowers, symbolizing the heavenly crown worn by Roman virgins. The Latin text inscribed in the chapel translates:

“While the organ was playing, Cecilia sang to the Lord saying: Let my heart be spotless so that I may not be confounded.”

Saint Agatha was known as an accomplished young woman of Sicily. History testifies only to the fact of her martyrdom. According to different accounts, she spurned the professions of love by her suitor, who then had her cruelly tortured and subjected her to an unnecessary mastectomy. Although this wound healed, Agatha succumbed to the repeated tortures of her tormentors. Because of her experience, Agatha is the patroness of those suffering from breast cancer or breast disease.

The Latin text on the mosaic in the St. Agatha Chapel translates:

As the attractive daughter of an affluent Roman couple, Saint Agnes received many offers of marriage once she came of age. However, Agnes chose to pledge herself as a bride of Christ, rather than accept the hand of any man. Upon her rejection of his proposal, one spurned suitor pronounced her to be a Christian, and had her presented to the governor. When no amount of persuasion could convince her to recant her vow of chastity, she was tortured and dragged unclothed through the streets to a brothel. However, according to legend, on the journey, as Agnes prayed, her hair grew long and covered her body. Once she arrived at the brothel, an angel protected her from all who wished to harm her. She was later sentenced to execution by beheading. Her patronage includes engaged couples, victims of sexual abuse, gardeners, and The Girl Scouts.

This mosaic in the St. Agnes Chapel shows Agnes holding a lamb, the symbol of purity and her claim as a bride of Christ. The altar frontal features a lamb and a winged dove, which bears in its beak an emblem symbolic of the soul of Agnes, carried to heaven. The Latin text translates:

Get to Know Father Ismael Ayala, the New Director of Liturgy
The Prophet Isaiah: Judgement and Hope