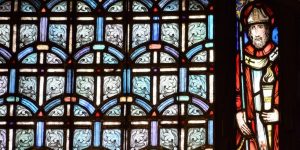 One of the Church’s first systematic theologians, Irenaeus is considered one of the most influential early Christian thinkers. On June 28, we celebrate his Memorial, recognizing his critical contributions in combatting the Gnostic heresy. He is portrayed in the Basilica in the east portico, as well as in stained glass in a lunette window of the Crypt Church.

Though little is known about Irenaeus’ formative years, it is believed that he was born in Greece and likely met Polycarp as a young man. According to Bernard Bangley:

“He wrote that he could point to the very spot where Polycarp sat when he taught. Irenaeus had heard ‘the accounts Polycarp gave of his conversation with John and with another who had seen the Lord.’”

At some point, Irenaeus moved to a Roman outpost in Gaul called Lyons, where the church endured brutal persecution by emperor Marcus Aurelius. After their bishop, Pothinus, was martyred, Irenaeus assumed his position.

During Irenaeus’ lifetime, Gnosticism was a pervasive heresy threatening the church. With a mixture of beliefs stemming from Greek philosophy, pagan rites, and mythology, Gnosticism presented an occult-like spirituality which seduced countless Romans. For the Gnostics, secret religious knowledge was required for salvation. Gnostics also embraced spiritual-physical dualism, insisting that human beings needed to be freed from the inherently evil physical world in order to pass into the spiritual realm.

Irenaeus saw a particularly repulsive type of pride in Gnostic writings, saying that they were “puffed up with conceit and self-importance… with the majestic air of a cock, they go strutting about – as if they have already embraced their angel.” It is no wonder, then, that Irenaeus wrote five books refuting the claims of Gnosticism.

Irenaeus’ Defense Against the Gnostics

A central point in Irenaeus’ arguments against Gnosticism was the concept of apostolic succession, undergirded by the assertion that an authoritative check was needed to counter incorrect religious ideas. He also argued that God’s creation was not inherently corrupt, as the Gnostics claimed, but rather, that human sin was responsible for evil in the world.

Irenaeus had a gentle disposition and made his arguments out of a genuine concern for the souls of his opponents. Thanks to his tireless efforts, Gnosticism eventually lessened in popularity and lost influence.

Yet in our own time, a kind of Gnosticism has been making a comeback: the spiritual-physical dualism continues to infect modern minds, convincing people that their “true” self is separate from their physical being. As Catholics, we must continue to defend a conception of the human person as an embodied being, looking forward with hope to the day when our bodies are renewed and raised again in Christ.

Celebrating a Century as America’s Catholic Church
Saints of the Crypt Church: A Virtual Tour - Part I