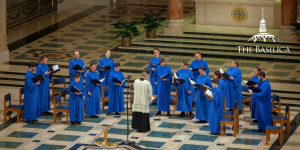 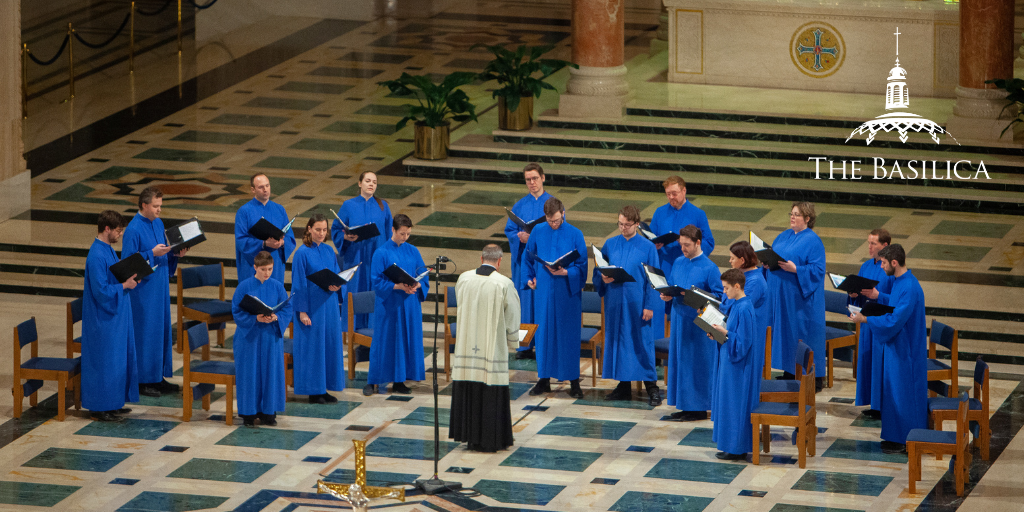 Whether you’re a regular at our Summer Organ Recital series or have just heard the heavenly sounds of the Basilica Choir for the first time, we invite you to learn these seven fun facts about music at the Basilica.

1. The Basilica is home to world-class musicians.

The Basilica’s own staff musicians bring an extraordinary level of excellence in worship to America’s Catholic Church every week. Both Dr. Peter Latona and Benjamin LaPrairie have composed dozens of vocal and instrumental works for occasions ranging from daily Mass to papal visits. Dr. Latona’s music was performed during the Apostolic Visit of Pope Benedict XVI to the United States in 2008 and in each city visited by Pope Francis during his 2015 Apostolic Visit to the United States. Benjamin’s original setting of Christus Vincit was premiered upon the entrance of Pope Francis into the Great Upper Church of the National Shrine in September of 2015. Vocalists like the award-winning Crossley Hawn also serve on staff and contribute to worship at the Basilica.

2. The Basilica Choir has performed for three popes and for the first canonization ceremony to take place on American soil.

On October 7, 1979, the Shrine Chorale performed works by Vaughan Williams and others under the direction of Robert Shafer for the visit of Pope John Paul II. It wasn’t until nearly 30 years later that the choir would have the chance to perform for a holy father at the National Shrine again, when Pope Benedict XVI presided at Vespers in the Crypt Church. The Basilica Choir sang under the direction of Music Director Peter Latona.

The Knights Tower Carillon was installed in 1963 and has marked significant moments in the life of America’s Catholic Church ever since – from the solemn remembrance of 9/11 in 2002 to the triumphant arrival of Pope Francis in 2015. Altogether, the individual bells range in weight from 21 lbs. to 7,500 lbs. – and their combined weight is a staggering 37,150 lbs.! The two bell chambers are located at the levels of 172 ft. and 223 ft., with the carillonneur’s playing cabin located between the chambers at 200 ft. above street level. From there, the carillonneur can play each of the 56 bells by either striking a wooden baton with the hand (or closed fist) or a wooden pedal with the foot.

4. Dr. Robert Grogan has served as the Basilica’s first and only Carillonneur since 1964.

Did you know that the original Shrine Carillonneur, Dr. Robert B. Grogan, still performs weekly recitals after Mass almost every Sunday? Since he began as carillonneur in 1964, he has delighted listeners with his beautiful playing on this unique instrument. Though nearly 60 years have passed since his first performance, he remains as energetic a musician as ever and undaunted by the open elements of the cabin, winter or summer! To learn more about Dr. Grogan, his experience, and how the Carillon works, check out the special interview with him we featured on the blog. In 2007, he was named a Knight of the Pontifical Equestrian Order of St. Gregory the Great.

5. The Basilica Choir has been around for more than 50 years.

In 1966, the Basilica first held auditions for the Chorale, a small choir that served as predecessor to the Basilica Choir. Over 200 people auditioned, and 40 were selected for the group. Today, the choir is comprised of 24 professional singers from the greater Washington metropolitan area and is dedicated to providing excellence in sacred choral music in the context of Liturgy throughout the Liturgical Year. The choir is engaged in almost 100 performances each year, and prepares approximately 300 works each season drawn from the wealth of the Roman Catholic sacred music tradition. In addition to performing choral literature from the vast treasury of sacred music, the choir champions newly composed works and has given numerous premieres.

6. The Basilica has served as the recording location for dozens of iconic albums of sacred music and broadcasts – including recordings from the Basilica Choir.

The choir maintains an active recording schedule and their performances have been broadcast throughout the world on the Eternal Word Television Network, NPR, WAOB Radio, Salt and Light, and the Catholic Channel on Sirius XM. Throughout the years, performances of musicians such as Maurice and Madeleine Chevalier Duruflé, Jean Langlais, Marilyn Mason, Günther Kaunzinger, Marilyn Keiser, Libera Boys Choir, and others, have been recorded at the Basilica.

7. The Basilica’s current Director of Music has served for over 20 years – the longest tenure of any of the music directors in its history.

Who founded the Oblates of Mary Immaculate?
Virtual Tour: Mosaics of the Great Upper Church