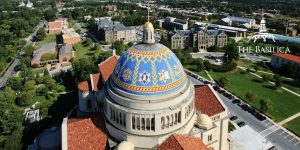 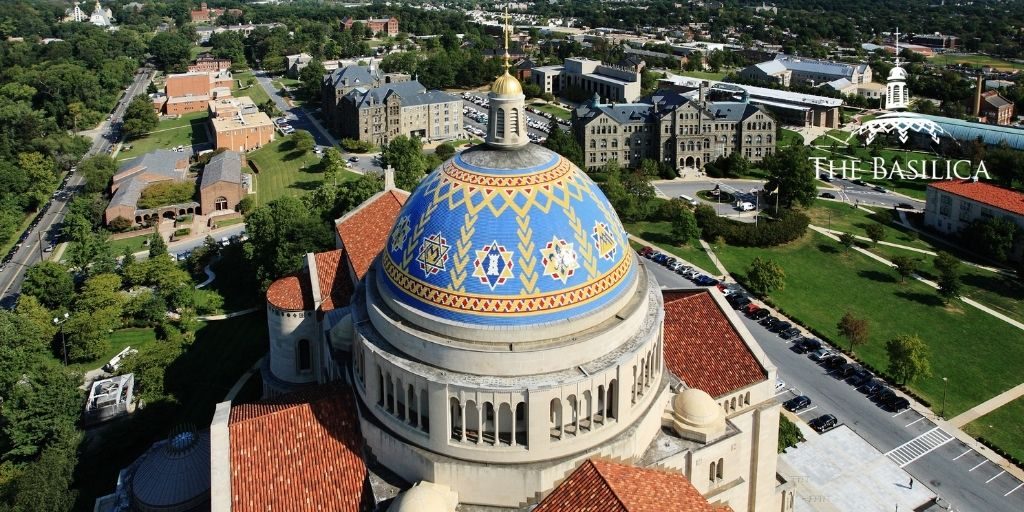 1. The Basilica of the National Shrine of the Immaculate Conception is the largest Roman Catholic church in North America, and it is among the ten largest churches in the world.

Did you know that the National Shrine has a gross floor area of over 200,000 square feet? The National Shrine stands as our nation’s preeminent Marian shrine and patronal church, rivaling the great sanctuaries of Europe and the world, not only in size and stature, but also in beauty, dignity and sanctity.

2. Plans to build the Basilica originated as early as 1846. 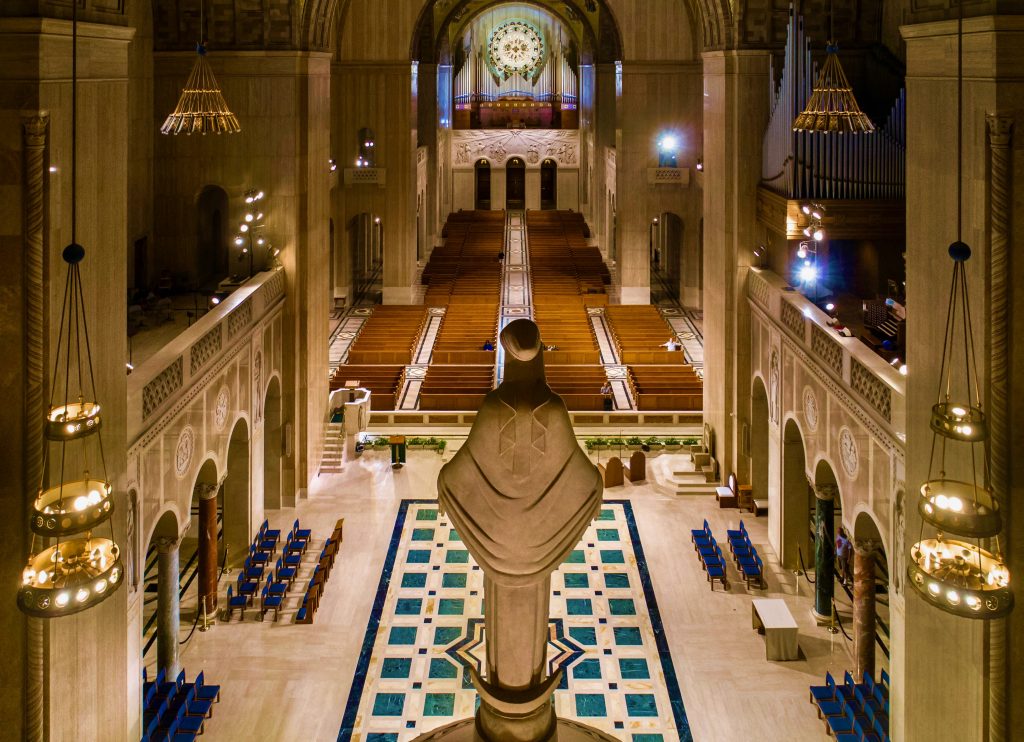 Though the foundation stone was placed in 1920, the idea of a National Shrine to the Blessed Virgin was envisioned much earlier. In 1846, the Lowell Courier Journal, a newspaper in Massachusetts, wrote of “a magnificent Catholic Church to be built at Washington, D.C. after the manner of the great cathedrals of the Old World from subscriptions of every Catholic Parish in America.”

Even in the 1900s, some of the early ideas for the church envisioned a Gothic cathedral, but Bishop Thomas Shahan felt that the contributions of the modern age could not compete with the basilicas of early Christianity and the cathedrals of the Middle Ages. His vision of a Romanesque-Byzantine architectural blend was ultimately decided upon for building “America’s Catholic Church.”

With over 80 chapels and oratories that relate to the Blessed Mother and peoples from countries around the world, one can virtually make a pilgrimage to many of the great Marian shrines of the world and receive their same graces and indulgences by visiting the Basilica. When the coronavirus pandemic brought an unprecedented halt to the multitude of visitors that usually grace its halls, it was believed to be the first time in nearly 100 years since the National Shrine’s founding that it closed for a non-weather-related event. 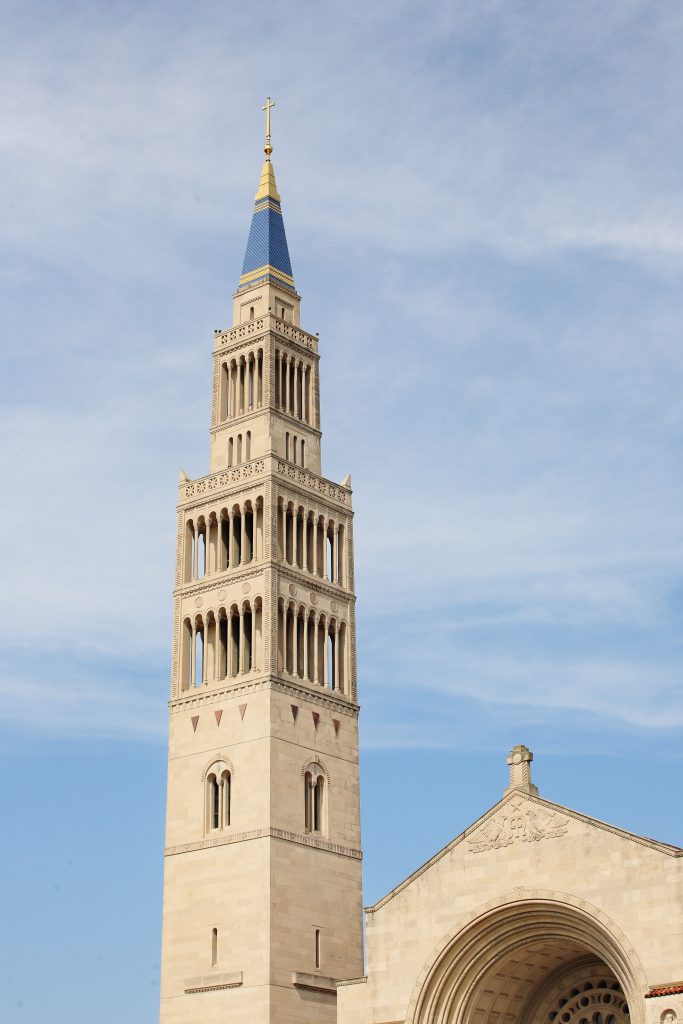 The artistic embellishment of the Basilica, both inside and out, complements the Romanesque-Byzantine style of its architecture. The brilliant mosaics, stained glass windows, and polished stone carvings throughout the Basilica and in its chapels and oratories express the reality of God dwelling within us.

5. The Basilica’s Knights Tower is the second-tallest building in Washington, D.C. – surpassed only by the Washington Monument!

One of the most intriguing architectural elements of the Basilica is the Knights Tower, which rises to the staggering height of 329 feet. It is home to a carillon composed of 56 bells, which together weigh a combined 37,150 pounds! Since its dedication in 1963, the carillon continues to ring out at significant moments in the life of America’s Catholic Church.

The Basilica’s architectural framework allowed the space to still be used by the faithful of America as it continued on the long road to completion. Raising funds to build the superstructure of the church was a formidable task in itself – but having sufficient financial resources to fill the church with mosaics, sculptures, and stained glass was another matter entirely. Today, the completed structure is comprised of 11.5 million bricks and 10,000 cubic yards of concrete, and new mosaics are continually added year after year. 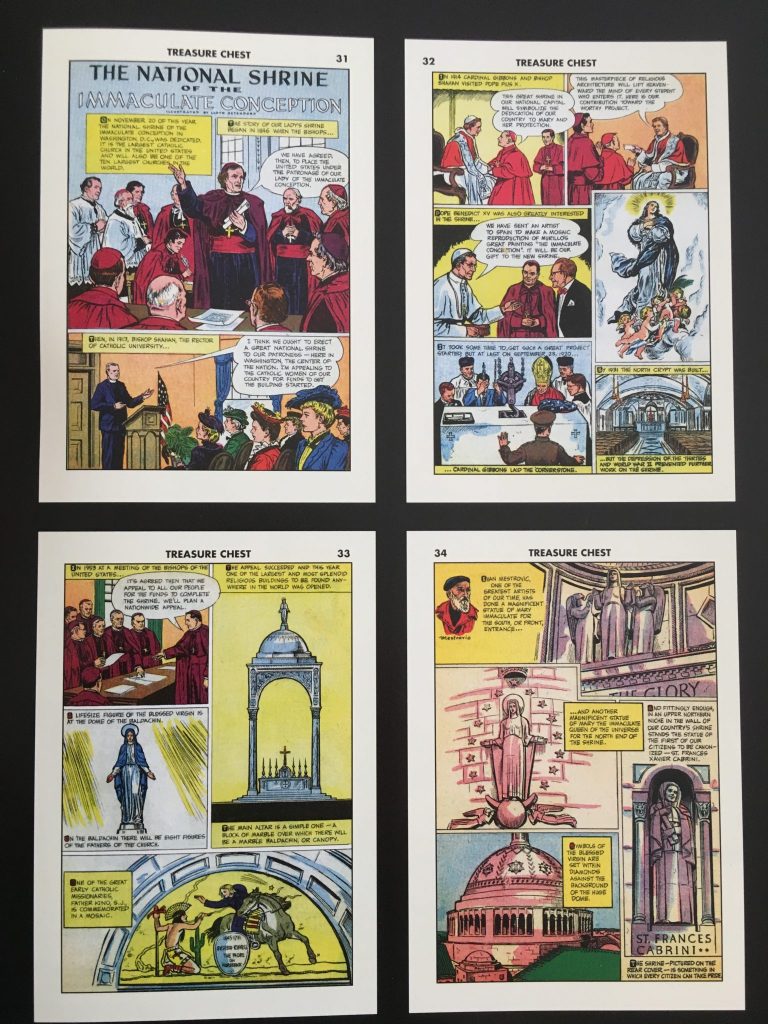 7. The National Shrine hosted the first canonization ceremony to ever take place on American soil.

September 23, 2015, was a historic day for not only the National Shrine, but for all American Catholics. On this day, Pope Francis presided over Mass on the Basilica’s east portico, which had been transformed into a beautiful sanctuary for the Canonization Mass of Junípero Serra. A congregation of 25,000 faithful from across the United States, including a contingent of Native Americans from California, were in attendance for this first canonization to take place on American soil.

8. A comic was created about the National Shrine following its completion in 1959.

The completion of the National Shrine in 1959 was celebrated by Catholics across the country in many different ways – including a feature in the comic book Treasure Chest of Fun & Fact, which was available through the parochial school system.

9. The Trinity Dome was created with over 14 million individual tile pieces.

Called the “crowning jewel” of the National Shrine, the Trinity Dome mosaic was one of the final major installations at America’s Catholic Church. Each of the 14 million pieces of glass used in the Trinity Dome was initially shaped using a hammer and chisel. Since every tile was created for a specific place on the mosaic, if the tile broke incorrectly while being chiselled, the artisan had to take another piece of glass and begin the process again. 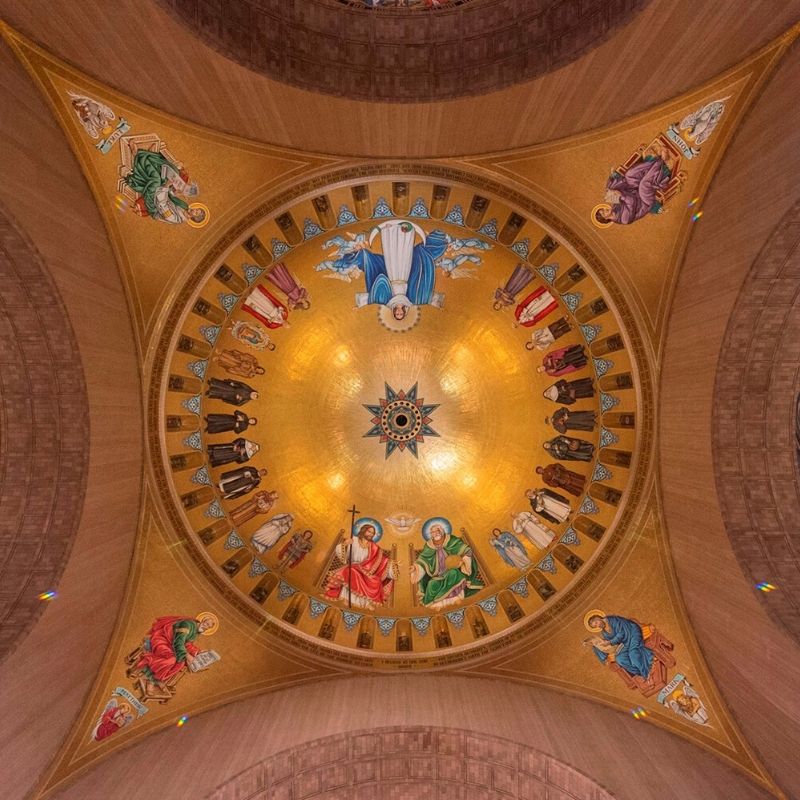 The National Shrine’s Foundation stone was placed 100 years ago on September 23, 1920. Home to dozens of chapels and oratories honoring the Mother of God and representing peoples from every corner of the globe, the National Shrine reflects the ethnic and cultural diversity of the United States and the unity and universality of the Catholic Church. To learn more about the 100 years of rich history of the National Shrine, visit our Centennial Celebration page.

Statement from Monsignor Walter Rossi on the Elevation of Archbishop Wilton Gregory to the College of Cardinals
The Fruit of the Spirit: Love, Joy, Peace