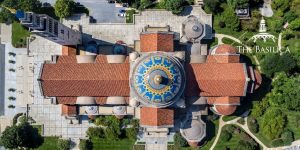 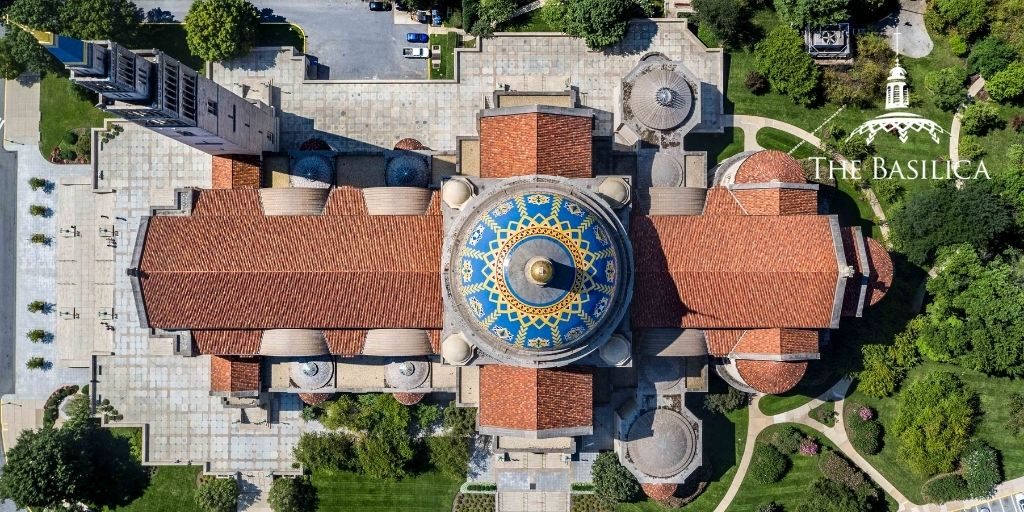 When Bishop Thomas Shahan first guided the construction of the National Shrine, he sought an aesthetic that would reflect the patristic understanding of beauty and eternal truth. He strove to create a building that would enhance sacramental life and serve as a “National Monument or testimony” resting “on a national devotion to the Blessed Virgin.”

A century after the placement of the foundation stone, the National Shrine embodies this vision in a distinctively American style, serving as a place of worship, pilgrimage, evangelization and reconciliation. Today we invite you to learn more about the history and development of the architecture and art of the Basilica.

Though plans to build a magnificent church in the nation’s capital were discussed as early as 1846, decades passed before construction began on this national Catholic monument dedicated to the Blessed Virgin Mary.

Some of the earliest ideas for the church envisioned a Gothic cathedral, but as a scholar and historian, Shahan felt that the contributions of the modern age could not compete with the basilicas of early Christianity and the cathedrals of the middle ages. He envisioned a style combining the symmetry and eloquence of the ancient basilica (Romanesque) with the mystical language of the mosaic and the triumph of the dome (Byzantine).

Architects ultimately settled on this Romanesque-Byzantine fusion in order to create an original design that was “sunk in tradition yet distinctively American.” The Romanesque-Byzantine style was also chosen to be distinct from the Washington National Cathedral, the Gothic Episcopalian cathedral whose construction was underway at the time.

One of the advantages of building the Shrine in the Romanesque-Byzantine style was that it made it possible to use the building long before it was completed. Raising funds to build the superstructure of the church was a formidable task in itself – but having sufficient financial resources to fill the church with mosaics, sculptures, and stained glass was another matter entirely.

The artistic embellishment of the Basilica, both inside and out, is in keeping with the Romanesque-Byzantine style of its architecture. Romanesque art effusively features figurative or stone sculpting, and the exterior of the Basilica contains heroic size figures of saints and finely sculpted tympana and archways. Tympana sculpted in relief ornament the interior east and west entrances and various niches in the nave and chancel areas. Stained and faceted glass windows decorate both the Upper and Lower Church areas.

Byzantine art is remarkable in its use of mosaic and marble. Above the spring line, this includes the mosaic ornamentation of seven main domes, along with the various side chapels and oratories. Below the spring line, the church is adorned with beautiful marble claddings. The finer marbles open out, allowing the marble veining to form symmetrical patterns.

Today, the Basilica of the National Shrine of the Immaculate Conception is the largest Roman Catholic church in North America, and it is among the ten largest churches in the world. It contains the world’s largest collection of contemporary ecclesiastical art and is constructed entirely of stone, brick, tile and mortar—without structural steel beams, framework or columns. But the Basilica is so much more than a building. As Pope John Paul II has remarked:

“This Shrine speaks to us with the voice of all America, with the voice of all the sons and daughters of America, who have come here from the various countries…. When they came, they brought with them in their hearts the same love for the Mother of God that was characteristic of their ancestors and of themselves in their native lands. These people, speaking different languages, coming from different backgrounds of history and traditions in their own countries, came together around the heart of a Mother they all had in common.” (October 7, 1979)

Jubilee 2009: A Photographic History of the Basilica of the National Shrine of the Immaculate Conception, by Dr. Geraldine Rohling

A Prayer for Marian Provision: the Miracle of Mariazell
100 Years in Video at America’s Catholic Church