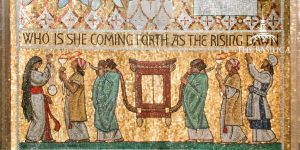 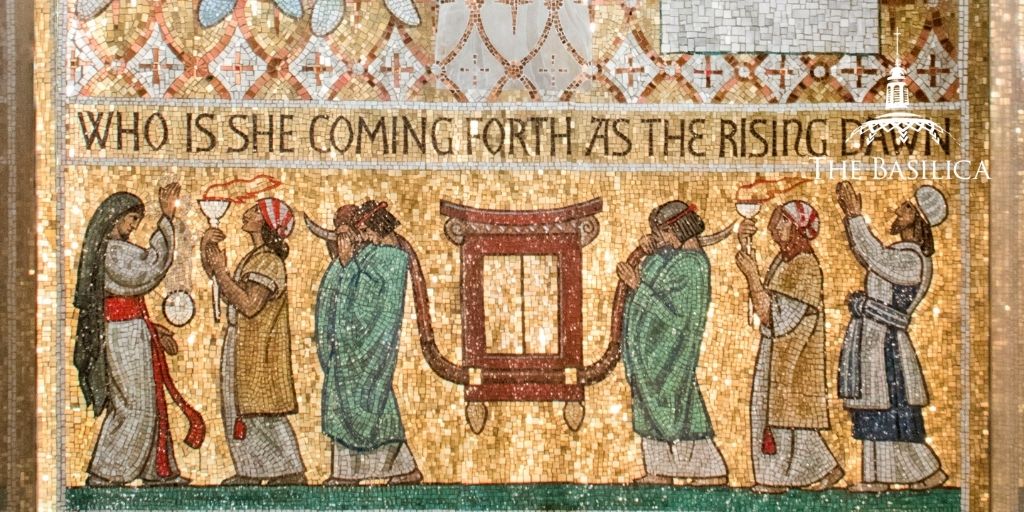 During the reign of Solomon, the people of Israel flourished – after defeating their enemies under King David, they dwelt in security and prosperity under Solomon’s wise rule, and a permanent house was built for the Lord. But this golden era in the history of Israel would not last forever. Learn more about King Solomon in our latest Biblical Figures post.

This post is Part II of a series — read Part I here.

With his great wealth, Solomon carried out David’s wish to build a glorious temple for the Lord. Constructed by 180,000 laborers and craftsmen over a period of seven years, the structure was covered with gold and precious stones, and filled with intricate carvings and the finest vessels.

Upon the temple’s completion, a massive seven-day celebration was held. Sacrifices were made to the Lord, and Solomon blessed the people. Then he prayed to the Lord, asking Him to listen to the prayers of His people that were offered from the temple, found in 1 Kings 8:27-30:

“Is God indeed to dwell on earth? If the heavens and the highest heavens cannot contain you, how much less this house which I have built! Regard kindly the prayer and petition of your servant, Lord, my God, and listen to the cry of supplication which I, your servant, utter before you this day. May your eyes be open night and day toward this house, the place of which you said, My name shall be there; listen to the prayer your servant makes toward this place. Listen to the petition of your servant and of your people Israel which they offer toward this place. Listen, from the place of your enthronement, heaven, listen and forgive.”

The Lord told Solomon that as long as he walked in His ways and honored Him, he and his descendants would be blessed. However, if they turned from the Lord, they would be cut off, and the temple would be destroyed.

When Solomon finished the temple, he built a palace for himself that was twice the size of the temple and took 13 years to build. He also built his Egyptian wife her own grand palace.

The Queen of Sheba

Solomon became known throughout the ancient world for his wealth and opulent palace, as well as his great wisdom. The Queen of Sheba heard of his knowledge and brought him her most difficult questions – as well as many spices, jewels, and large entourage. Solomon answered all her inquiries, and she was impressed by all that she heard and saw. As she said in 1 Kings 10:6-9:

“The report I heard in my country about your deeds and your wisdom is true,” she told the king. “I did not believe the report until I came and saw with my own eyes that not even the half had been told me. Your wisdom and prosperity surpass the report I heard. Happy are your servants, happy these ministers of yours, who stand before you always and listen to your wisdom. Blessed be the Lord, your God, who has been pleased to place you on the throne of Israel. In his enduring love for Israel, the Lord has made you king to carry out judgment and justice.”

Solomon Turns Away from the Lord

Though the Lord had greatly blessed Solomon, in his old age, he was led astray by his pagan wives and turned from the Lord, worshipping other gods and dishonoring the Lord in his heart. The Lord became angry with Solomon, and appeared to him twice, warning him to stop worshipping these false gods. When Solomon did not listen, the Lord pronounced judgement on him. 1 Kings 11:11-12 tells us:

“So the Lord said to Solomon: Since this is what you want, and you have not kept my covenant and the statutes which I enjoined on you, I will surely tear the kingdom away from you and give it to your servant. But I will not do this during your lifetime, for the sake of David your father; I will tear it away from your son’s hand.”

The Lord raised up adversaries against Solomon, Hadad the Edomite and Rezon, the son of Eliada, and they antagonized the Israelites. Additionally, Jeroboam, a servant of Solomon, conducted a rebellion that led most of the kingdom to follow him instead of Solomon’s son, Rehoboam; only the tribe of Judah was left under his rule.

Despite having everything that he could possibly want, Solomon was led astray by his sinful desires. His many wives (seven hundred princesses and three hundred concubines) turned his heart from the Lord, and he worshipped other gods and built high places for them. Commentators emphasize that many of these marriages were political; Solomon became so concerned with maintaining his power and political relationships that he forgot about the importance of pleasing God first. As a result of his disobedience, the glorious temple that he built for the Lord was eventually destroyed — the Babylonians invaded Jerusalem and burned it to the ground.

The Need for a Perfect King

Though Solomon ultimately failed as king and the temple was razed, his failures were part of God’s plan to show Israel their need for a perfect king. Solomon may have been blessed with great wisdom, but Jesus, the perfect king with true wisdom, was still to come.

Not only is Jesus the perfect king, but He is also the perfect temple, which, after being destroyed, was raised in glory, as He describes in John 2:19-22:

“Jesus answered and said to them, ‘Destroy this temple and in three days I will raise it up.’ The Jews said, ‘This temple has been under construction for forty-six years, and you will raise it up in three days?’ But he was speaking about the temple of his body. Therefore, when he was raised from the dead, his disciples remembered that he had said this, and they came to believe the scripture and the word Jesus had spoken.”

As His children, we are no longer ruled by our sinful desires, but instead, we have redemption in Christ Jesus. As Colossians 1:13-14 states:

“He delivered us from the power of darkness and transferred us to the kingdom of his beloved Son, in whom we have redemption, the forgiveness of sins.”

Thanks be to God, who leads us in perfect wisdom when our wisdom and the wisdom of earthly rulers fails.

Who is the patron saint of lost things?
Saints of the Trinity Dome: Pt. I