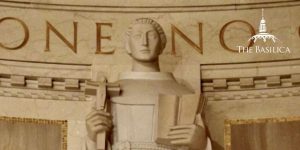 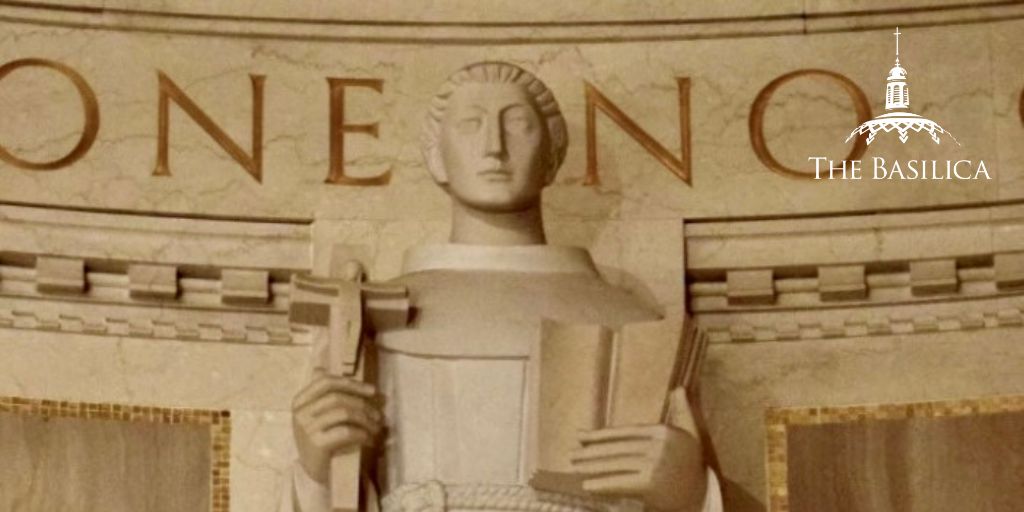 On June 13, we celebrate the Memorial of St. Anthony of Padua, Priest and Doctor of the Church. Remembered for his magnificent oratory skills and astute thinking, Anthony is the patron saint of lost things. Today, we invite you to learn about how he was plucked from obscurity into a great calling, and discover where he is portrayed in the Basilica. 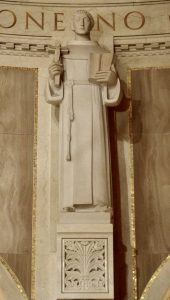 Born as Ferdinand in 1195, St. Anthony received a robust education in France and Italy. When he was 15, he joined the Canons of St. Augustine, where he distinguished himself by his sharp memory. This extraordinary retentiveness enabled him to easily recall lengthy passages of Scripture – a skill which would serve him well in his future calling.

After a group of Franciscans were martyred in Morocco, Ferdinand decided to join the Franciscan Order and attended the general chapter in Assisi alongside St. Francis himself. It was there that Ferdinand took the name Anthony and began his service in positions of obscurity.

Then one day, everything changed.

From Dishwasher to Orator

Anthony was attending the ordination ceremony of both the Franciscans and the Dominicans. By some communication error, each order thought the other would supply the speaker and consequently, neither had a speaker prepared. In desperation, they asked Anthony to fulfill the task. At first, Anthony protested – he was, after all, only the dishwasher and janitor – but when he realized that no one else would rise to the task, he agreed and gave a speech on the spot.

All in attendance were amazed at Anthony’s eloquent preaching, including St. Francis, who immediately granted him permission to begin teaching others in an official capacity. One source states, “He poured forth brilliant and burning words, a flood of divine eloquence.” Not only had Francis succeeded in delivering a sermon of exceptional understanding and depth with no preparation – but he had done so in a winsome, engaging oratory style.

With St. Francis’ blessing, Anthony started a highly effective preaching mission, often speaking in outdoor settings, without using notes. His persuasive style convinced many people to turn away from their sin, to forgive their enemies, and live more pious lives. Those in government enacted measures against usury, drunks became sober, and criminals turned from lawlessness. Anthony’s mission first took him to Italy, and then to France, where he later developed dropsy. Sadly, Anthony’s tendency to overwork and health problems ultimately took his life; he passed away in a Poor Clare convent at the young age of 36, while on his way home to Padua.

Why is Anthony known as the patron saint of lost things?

According to tradition, someone’s lost psalter was found following a prayer of St. Anthony. For this reason, he is known as the patron saint of lost things. You can find him portrayed in the Basilica in a Trani marble statue in the Great Upper Church.

10 Verses about God Our Father
Who Was the Wisest Man in the Bible?