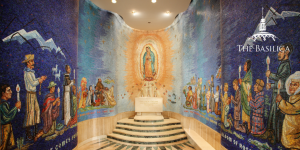 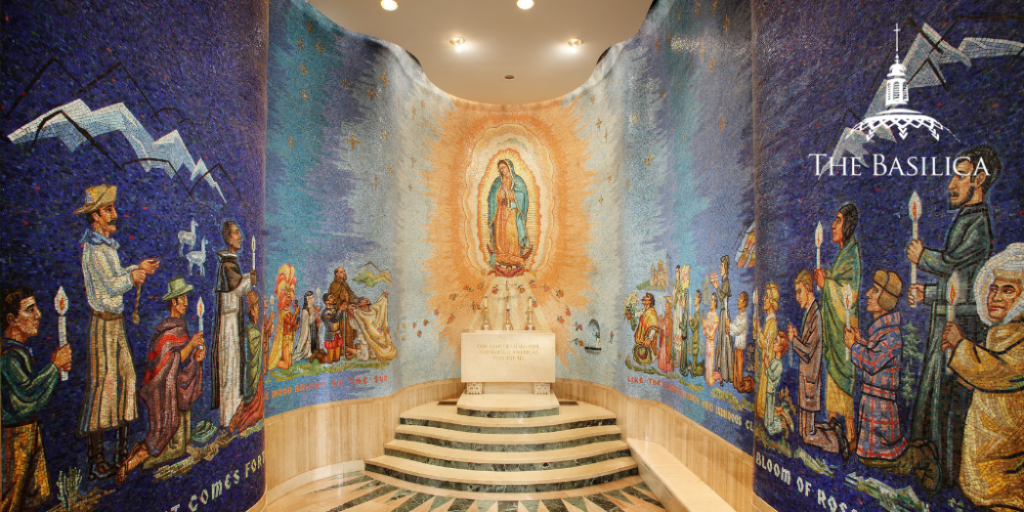 The feast of Our Lady of Guadalupe is celebrated on December 12th, commemorating Mary’s appearance to Juan Diego outside Mexico City. This Marian title holds a special place in the hearts of Latin American Catholics as the major Marian apparition of the New World. Today, we invite you to learn more about this beloved devotion and virtually explore the chapel where Mary is honored under this title in the Basilica.

The Tradition of Our Lady of Guadalupe

According to tradition, Juan Diego was traveling home from Mass on December 9, 1531, when Mary appeared to him on Tepeyac Hill. She directed him to build a church dedicated to her on that very spot and told that him in his native Nahuatl tongue that her name was “Tlecuatlecupe,” (pronounced similarly to Guadalupe). The name means “the one who crushes the head of the serpent.”

However, when Juan Diego approached the bishop about the apparition, he was skeptical. It wasn’t until a few days later, on December 12, that he was assured of the legitimacy of the appearance. On that day, Juan Diego once again came to the priest and showed him the roses that he had gathered at the site. As he unfolded his tilma (cloak,) the roses fell to the ground in a miraculous image of the pregnant Virgin. The priest realized his mistake, and Juan Diego’s tilma became a revered object. A chapel was soon erected at Tepeyac Hill, which is now one of the most visited Marian sites in the world.

Our Lady of Guadalupe at the Basilica

In the Basilica, the appearance of Our Lady of Guadalupe is honored in the Our Lady of Guadalupe Chapel of the Great Upper Church. Its brilliant blue sinuous walls give the viewer the impression of the apparition, and are covered with the people of North, Central, and South America, carrying candles in procession to Our Lady. Cardinal Cushing, the donor of this chapel, believed that it would serve as a “visible sign of solidarity between the people of the United States and Latin America.” The chapel contains an altar that belonged to Archbishop John Carroll, which was first used in 1774 at the home of his mother in Rock Creek, Maryland.

You can explore the Our Lady of Guadalupe Chapel at the Basilica in our immersive virtual tour. 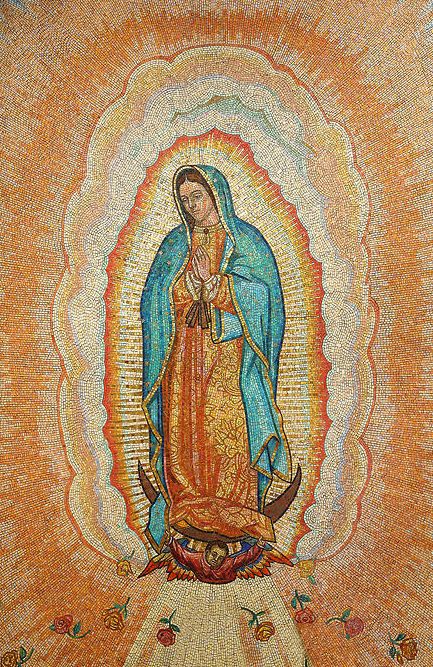 The chapel is inscribed with the following prayer, requesting the intercession of the Blessed Mother under her title as the Patroness of Latin America:

In honor of Our Lady of Guadalupe, we invite you to light a candle today at the National Shrine. Vigil candles burn in the chapels throughout the Great Upper Church and lower crypt level of the National Shrine. Each candle represents the faith of the supplicants and their fervent prayers entrusted to the loving intercession of the Blessed Mother.

Light a candle
St. John of the Cross and the Dark Night of the Soul
Why Did God Ask Abraham to Sacrifice Isaac?