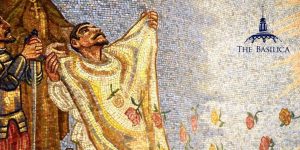 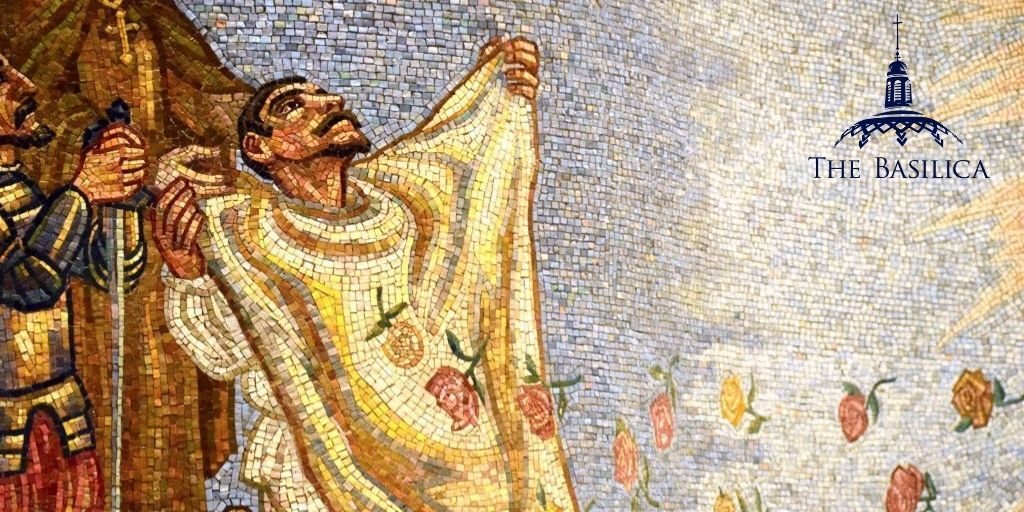 St. Juan Diego Cuauhtlatoatzin is known for receiving the vision of Our Lady of Guadalupe. Born in 1474 in Cuautlitlán, Mexico (near present-day Mexico City), he was one of the Chichimeca people. Around 1524, he was baptized by Friar Peter da Gand, an early Franciscan missionary. He is depicted in the Basilica in the Our Lady of Guadalupe Chapel and the Trinity Dome.

On December 9, 1531, Mary appeared to Juan Diego on Tepeyac Hill while he was on his way to Mass. She asked him to approach the bishop and request that a shrine be built to her there, where she would bless those who called upon her. However, when Juan Diego requested this of the bishop, the bishop demanded proof of the vision.

The Miracle of Our Lady of Guadalupe

Juan Diego returned to the hill, where roses were blooming, though it was almost winter. He picked some of the flowers and brought them in his cloak to the bishop. When he opened his cloak, the flowers fell out and an image of the Blessed Mother was imprinted on it. The Bishop then gave his blessing, and a chapel was built on the hill.

Juan Diego’s cloak was placed in the chapel, and he lived in a small dwelling near the chapel for the rest of his life, serving as its caretaker, greeting pilgrims, and spending time in prayer and devotion. In 1548, he passed away and was buried in the chapel.

The Image of Our Lady of Guadalupe

On May 6, 1990, Juan Diego was canonized by Pope John Paul II at the Basilica of Santa Maria de Guadalupe in Mexico City. The cloak imprinted with the miraculous image of the Blessed Virgin Mary received by Juan Diego is still preserved there today. With native features and dress, Mary is portrayed with the moon at her feet, her mantle covered with stars, and an angel supports her. She is also pregnant, as demonstrated by the black girdle around her waist; a picture of how Christ’s gospel is born among the people of the New World.

This image is also depicted in the Chapel of Our Lady of Guadalupe in the Basilica. Here, Mary is surrounded by the people of the North, Central, and South Americas, carrying lighted candles in procession. The walls of the chapel are curved to imitate the experience of the apparition.

The Significance of Juan Diego and Our Lady of Guadalupe

Juan Diego is significant because he was one of the first indigenous people in the New World to embrace Catholicism. As Pope John Paul II said at Juan Diego’s canonization: 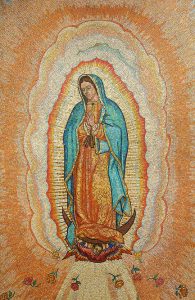 In accepting the Christian message without forgoing his indigenous identity, Juan Diego discovered the profound truth of the new humanity, in which all are called to be children of God. Thus he facilitated the fruitful meeting of two worlds and became the catalyst for the new Mexican identity, closely united to Our Lady of Guadalupe, whose mestizo face expresses her spiritual motherhood which embraces all Mexicans. This is why the witness of his life must continue to be the inspiration for the building up of the Mexican nation, encouraging brotherhood among all its children and ever helping to reconcile Mexico with its origins, values and traditions.

The Our Lady of Guadalupe Chapel at the Basilica is inscribed with the following prayer, requesting the intercession of the Blessed Mother under her title as the Patroness of Latin America:

In honor of St. Juan Diego and Our Lady of Guadalupe, we invite you to present your intentions, both great and small, to Our Lady by lighting a candle today at the National Shrine. Vigil candles burn in the chapels throughout the upper church and lower crypt level of the National Shrine. Each candle represents the faith of the supplicants and their fervent prayers entrusted to the loving intercession of the Blessed Mother.

Light a candle
The Fruit of the Spirit Part II: Patience, Kindness, Generosity
Why Do We Celebrate the Immaculate Conception?