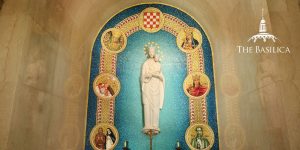 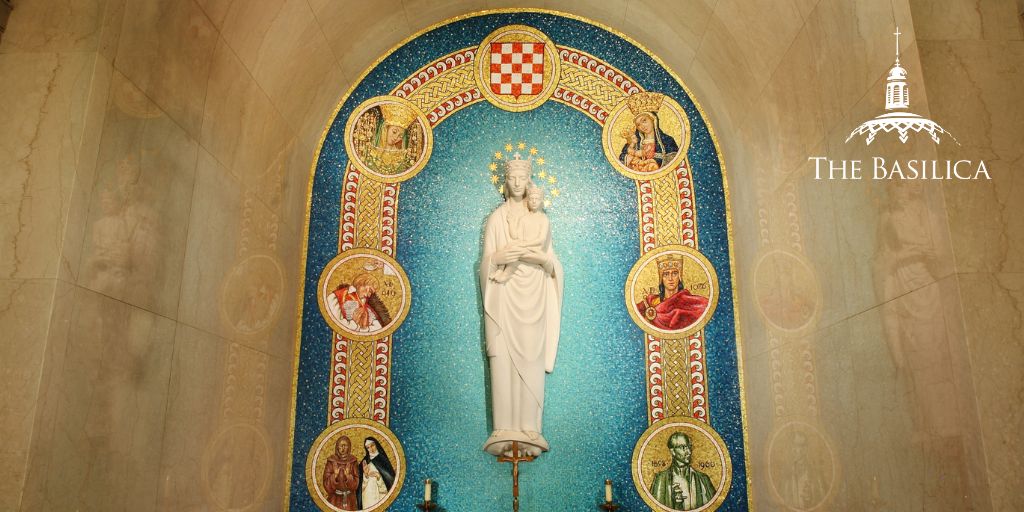 In a world full of conflict and strife, the faithful often turn to Mary for hope and refuge. Throughout the centuries, she has preserved the helpless against the attacks of oppressors. In the fourth post in our Mary Across the Continents series, learn about three time-honored Marian traditions associated with her intercession during times of war and virtually tour the chapels where they are honored at the Basilica.

Our Lady of Czestochowa

Dating to the 14th century, the devotion to Our Lady of Czestochowa is associated with Mary’s safeguarding of the faithful. The icon was originally brought to the monastery at Jasna Góra (“The Bright Hill”) in 1382. On Easter Sunday in 1430, the shrine came under attack from the Hussites, who slashed the icon with a sword, marring Mary’s face with scars.

When the Swedish army invaded two centuries later, the monastery was left miraculously untouched. In the wake of this astonishing event, King Jan Casimir declared the Blessed Virgin to be Queen of Poland on April 1, 1656. This Marian devotion remained close to the heart of the Polish people throughout the ages and was especially significant to Pope John Paul II, who prayed in this chapel during his visit to the Basilica, and to the Solidarity Movement in Poland.

In the Chapel of Our Lady of Czestochowa at the Basilica, the icon is a copy of the original by Polish artist Leonard Torwirt. While the Basilica icon bears the same “scars” the Blessed Mother has in the original, it has additional ornamentation on the halo of the Virgin and Child. Symbols of royal lineage grace her adornments: her robe is embellished with fleur-de-lis and she is crowned with a six-pointed star.

The dome of the chapel contains a mosaic with 20 holy men and women representing the devotion of the Polish people to God and the Blessed Mother. A lamb adorns the altar, symbolizing the persevering faith of the people of Poland and echoing the Triumph of the Lamb mosaic in the Great Upper Church, which was a gift of the Polish people to the Basilica.

Our Lady of Bistrica

Even older than Our Lady of Czestochowa, the Marian tradition of Our Lady of Bistrica finds its origin in the 13th century. When the Turks invaded the town of Bistrica in 1545, the statue of Our Lady was hidden by a priest who wished to protect it. However, the priest died without telling anyone where he hid the statue, and it was lost for 40 years before it was discovered when the statue emanated a bright light from the wall of the church! In 1880, the statue also survived a massive fire that destroyed the majority of the church. Due to its unique history, the statue became a symbol of the enduring faith of the Croatian people.

At the Basilica, the marble statue of Our Lady of Bistrica is depicted holding the Infant Jesus and standing on the head of Satan. The pink marble altar is inscribed with the words: “Maria Bistrica, pray for us” in Croatian.

Pokrov: Holy Protection of the Theotokos

During the siege of Constantinople in 626, the people of the city gathered at the Church of Blachernae and held an all-night vigil, singing and praying for intervention. According to tradition, the Blessed Mother appeared to the congregation and protected them under her maphorion – the Holy Veil of the Virgin.

In the chapel at the Basilica, which is also known as the Byzantine-Ruthenian Chapel, the wall behind the altar depicts the Blessed Mother in a brilliant mosaic of red, blue, and gold, holding the Holy Veil in her hands as at Blachernae. The iconostasis features Christ the Teacher and Mary as Theotokos, while the Royal (sanctuary) doors show the four evangelists. The two Deacon (side) doors portray Saints Lawrence and Stephen, two Deacons of the early Church.

The left wall of the chapel shows the Carpathian Mountains with significant saints of Eastern Europe, including Cyril, Methodius, and the weeping Madonna, Maria Pozc. The right wall represents Ruthenian Catholics in the United States, with the Statue of Liberty, the Seminary of Saints Cyril and Methodius in Pittsburgh, and an icon of Our Mother of Perpetual Help.

3 Latin American Saints You Should Know
10 Psalms of Joy