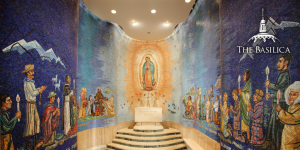 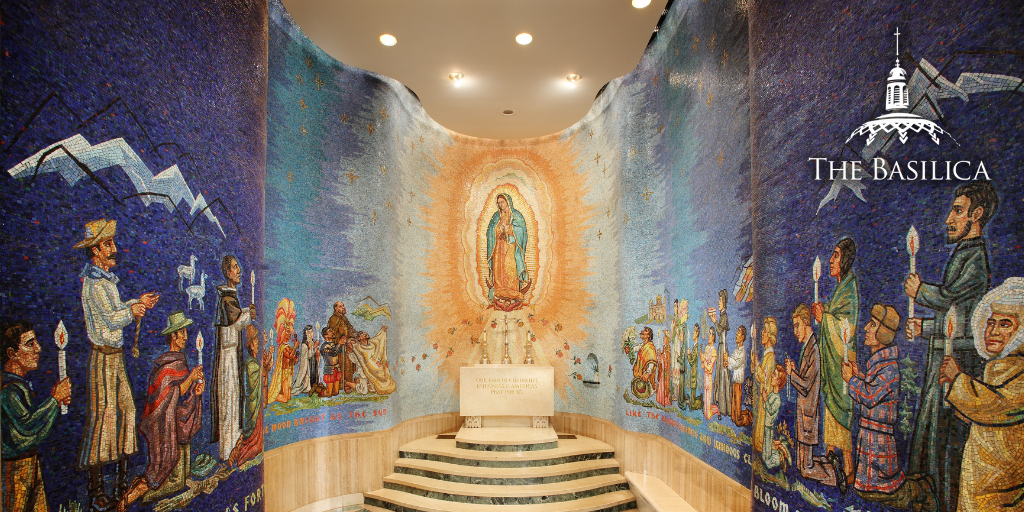 Did you know that September 15 to October 15 is Hispanic Heritage Month? As we honor the unique contributions of Latin Americans throughout history, we are proud to highlight the stories of some of the prominent Latin American saints portrayed in the Basilica. Today, we invite you to learn more about St. Juan Diego, St. Martin de Porres, and St. Rose of Lima, and discover where they appear in the Basilica’s art and architecture.

Born to the Chichimeca people in 1474 in Cuautlitlán, Mexico (near present-day Mexico City), St. Juan Diego Cuauhtlatoatzin is known for receiving the vision of Our Lady of Guadalupe. He was baptized by a missionary named Friar Peter da Gand around 1524 and on December 9, 1531, Mary appeared to Juan Diego on Tepeyac Hill while he was on his way to Mass. She asked him to approach the bishop and request that a shrine be built to her there, where she would bless those who called upon her. However, when Juan Diego requested this of the bishop, he demanded proof of the vision.

When Juan Diego returned to the hill, he saw that roses were blooming though it was almost winter. He picked some of the flowers and brought them in his cloak to the bishop; as he opened his cloak, the flowers fell out and an image of the Blessed Mother was imprinted on it. The Bishop then gave his blessing, and on the hill a chapel was built which housed Juan Diego’s cloak. For the rest of his life, he lived in a small dwelling near the chapel, serving as its caretaker, greeting pilgrims, and spending time in prayer and devotion. In 1548, he passed away and was buried in the chapel.

On May 6, 1990, Juan Diego was canonized by Pope John Paul II at the Basilica of Santa Maria de Guadalupe in Mexico City. The image of him portrayed there is also depicted in the Chapel of Our Lady of Guadalupe in the Basilica. Here, Mary is surrounded by the people of the North, Central, and South Americas, carrying lighted candles in procession. The walls of the chapel are curved to imitate the experience of the apparition.

Juan Diego was one of the first indigenous people in the New World to embrace Catholicism and is depicted in the Basilica in the Our Lady of Guadalupe Chapel and the Trinity Dome.

Martin de Porres was born out of wedlock in Lima in 1569, to a Spanish man and a formerly enslaved Peruvian woman. Though his father enjoyed a position of power as governor, he sought to distance himself from his mixed-race son and left his mother to raise him.

When he was just 12, Martin began training to be a barber – a profession which, at the time, entailed surgical procedures such as tooth pulling and bloodletting in addition to cosmetic services! About three years later, Martin joined a Dominican monastery where he initially served as janitor but was soon reassigned after his other skills were noticed. He became an invaluable medical assistant, serving as head of the infirmary and distinguishing himself with his knack for healing and use of herbal remedies.

Not only did Martin found an orphanage and a hospital for abandoned infants, but his medical services expanded to the streets of Lima, where he would pick up ailing vagabonds and bring them back to his own room to nurse them back to health. Being of African heritage himself, he also had a particular compassion for enslaved people, often fulfilling the basic needs their overseers neglected.

Throughout all his endeavors, Martin demonstrated the utmost love and charity, and became a lay brother of the Dominicans at the suggestion of his superiors. In addition to his work in hospitals and social justice, he also started an animal shelter at his sister’s house to care for cats and dogs. He passed away at age 60 on November 3, 1639, and was canonized in 1962. You can find him portrayed in the Basilica in the Our Lady of Guadalupe Chapel, the Second Coming mosaic, and the Trinity Dome.

Did you know that Rose of Lima was the first named saint in the Western hemisphere? Born as Isabel de flores to Spanish parents in 1586, she was extraordinarily beautiful even as an infant, earning her the name “Rose.” As she grew older, she only became more and more lovely, which was a great source of pride for her parents. After losing much of their fortune in mining speculation, her parents were eager to have their beautiful daughter snatched up by a rich suitor. But while countless young men sought Rose’s affections, she eschewed them for spiritual pursuits.

Despite her parents’ wishes, Rose took a vow of virginity and joined the third order of St. Dominic. At one point, she decided to move into a garden hut, where she dedicated herself to prayer and provided for her family through needlework and gardening. She also used a room in her family’s house to care for the ill and elderly, and soon attracted many visitors for the peace and respite she offered. The faithful flocked to Rose for advice, prayer, and healing, and some even credited her with saving Lima from earthquakes in the surrounding region.

In her final years, Rose grew ill and lived under the care of a local official for three years until her death in 1617 at age 31. After she passed, so many people rushed to Lima for her funeral that it had to be delayed some days. Today, St. Rose of Lima is known as the patron of all South America. You can find her portrayed in the Basilica in the Our Lady of Guadalupe Chapel and the west portico.

Who was the "Good Pope"?
Virtual Tour: Marian Protection in Times of War