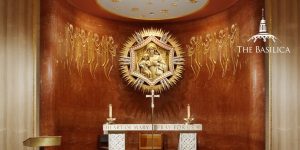 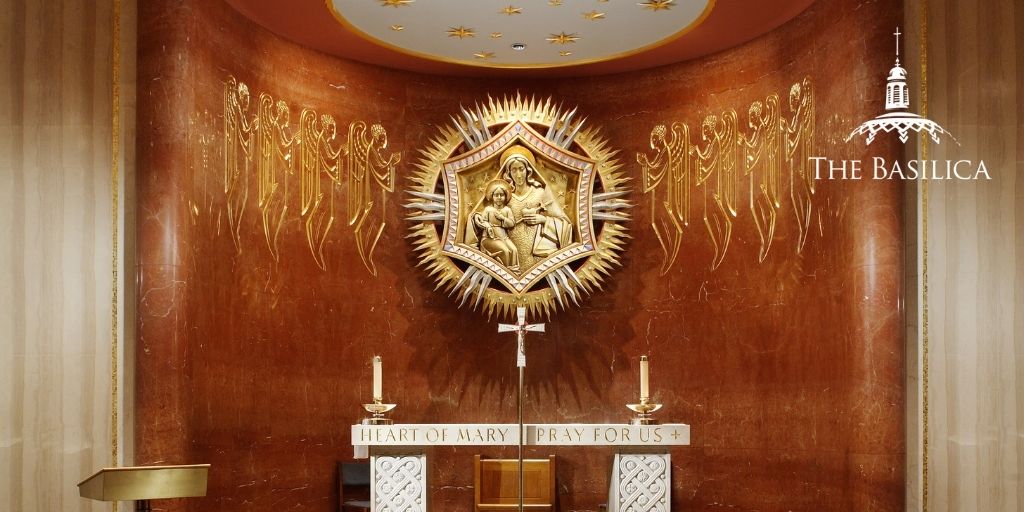 For he commands his angels with regard to you,
to guard you wherever you go.
With their hands they shall support you,
lest you strike your foot against a stone.
— Psalm 91:11-12

Angels have long been a popular motif in sacred art, capturing our imaginations with their mysterious beauty and inspiring a profound sense of awe and wonder. But angels aren’t simply beautiful – they are powerful beings who carry out the will of God, serving as messengers, ministers, guardians, and warriors. With the Memorial of the Holy Guardian Angels on October 2, we celebrate the role of angels as protectors of God’s children and invite you to take a virtual tour of the places where angels are depicted in the art of the Basilica.

The Basilica prominently features angels in the five domes of the Upper Church: the Incarnation Dome features the angel Gabriel, appearing to Mary; the Redemption Dome shows an angel ministering to Jesus in the wilderness; in the Trinity Dome, you will find the archangels Michael and Gabriel, as well as a choir angel holding a lyre; and the Triumph of the Lamb Dome illustrates the Kingship of Christ with four angels resting in the four pendentives, each holding a quarter of the earth.

Mary and the Angels

Throughout the art of the Basilica, Mary is often accompanied by angels. These depictions usually show the Blessed Virgin with cherubim, who surround her feet or bestow her with a crown. In the Our Lady of Antipolo Oratory, plump cherubim hover over Mary as she arrives in Manila, while stained glass depicts angels guarding the Ark of the Covenant.

In the Mary, Queen of All Hearts Chapel,  Mary kneels by the crib of Jesus, offering him to the world. She is encircled by angels crowning her as queen.

The Immaculate Heart of Mary Chapel in the Crypt Church has eight golden angels etched into its red Spanish marble walls, surrounding the gilded wood medallion of the Blessed Mother and the Infant Jesus. A seal on the floor also features the Archangel Michael.

Christ and the Angels

The Christ the Good Shepherd Chapel was the first chapel installed in the Crypt Church. The glimmering mosaic image of Jesus is at once a reminder of His loving nature and unspeakable power, portraying Him with His hand laid gently on a sheep, while two angels stand at His side – the forces of heaven awaiting His command.

The Christ in Majesty mosaic portrays the reigning Christ surrounded by angels as He sits enthroned in full power and glory. The three red-robed angels are dominations (ministers) who each watch over one dominion:  temporal things (portrayed with a tree), contemplation (depicted with an eagle), and spiritual things (shown with a cross). The four white-robed angels are Guardians, one of whom holds the National Shrine, and the final two are Seraphim, depicted as wheels of fire.

In honor of the Holy Guardian Angels, we invite you to light a candle today at the National Shrine. Vigil candles burn in the chapels throughout the Great Upper church and lower crypt level of the National Shrine. Each candle represents the faith of the supplicants and their fervent prayers entrusted to the loving intercession of the Blessed Mother.

Light a candle
The American Mosaic: Saints of the United States – Pt. III
Our Lady of the Rosary: A Virtual Tour