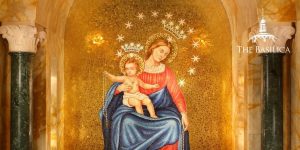 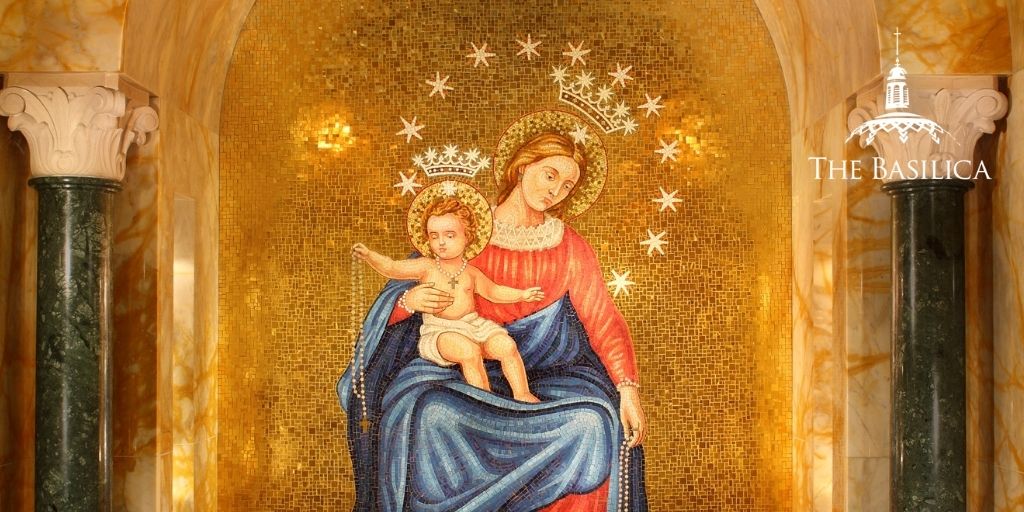 On October 7, we celebrate the Memorial of Our Lady of the Rosary, which was first instituted by Saint Pius V in 1573, following the extraordinary victory of the Christian naval fleet over the Turks at Lepanto. Tradition holds that the victory was achieved almost effortlessly although the opposing fleet was nearly three times their size – a miracle which the faithful attribute to the soldiers’ fervent prayer of the Rosary. Now, nearly 450 years later, Catholics around the world continue the tradition of the Rosary, looking to the Blessed Mother for care and protection.

As we celebrate Our Lady of the Rosary, we invite you to take a virtual tour of where the Blessed Mother is honored under this title in the Basilica. Explore the breathtaking chapels, resplendent mosaics, and intricate sculptures in immersive 360°.

Our Lady of the Rosary

Our Lady of Fatima

According to tradition, the Virgin Mary appeared on May 13, 1917, to three shepherd children near Fatima, Portugal. The first sighting was followed by five additional sightings – and in each, she asked the children for devotion to her Immaculate Heart and to pray the Rosary daily for the conversion of sinners. During the last sighting, she told the children she was the Lady of the Rosary and gave them a message of prayer, peace, and penance known as the “Secret” which was later believed to foretell the assassination attempt on Pope John Paul II. The Oratory of Our Lady of Fatima at the Basilica features a bronze statue of the Blessed Mother holding a Rosary.

Our Lady of Pompei

The connection of the Rosary with Pompei dates to the late 1800s, when Mary appeared to an Italian man named Bartolo Longo and instructed him to promulgate the Rosary. Bartolo led an effort to build a Marian Shrine dedicated to Our Lady of the Rosary in Campania – a town near the ruins of Pompeii. Our Lady of Pompei is also known as Our Lady of Victory, with the Rosary seen as a spiritual weapon in the battle against sin and evil in the world.

If you are interested in touring more of the Basilica virtually, you can check out our Mysteries of the Rosary Virtual Tour.

In honor of Our Lady of the Rosary, we invite you to light a candle today at the National Shrine. Vigil candles burn in the chapels throughout the Great Upper church and lower crypt level of the National Shrine. Each candle represents the faith of the supplicants and their fervent prayers entrusted to the loving intercession of the Blessed Mother.

Light a candle
Virtual Tour: Angels of the Basilica
Who Is the Universal Patron of Charity?