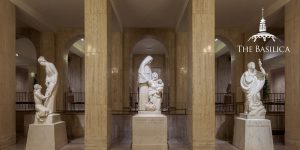 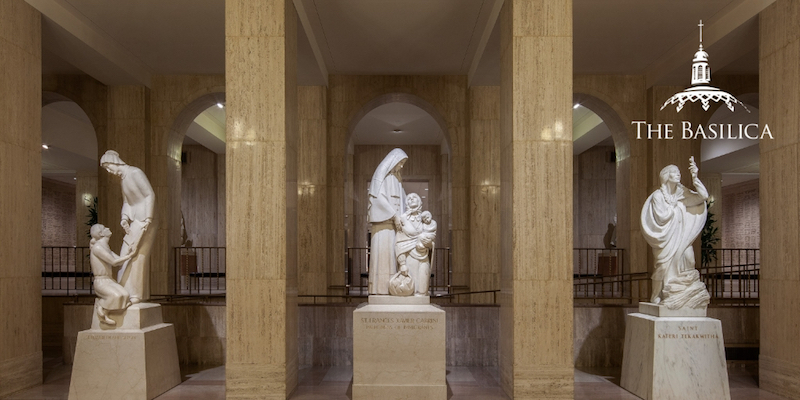 Behind every generation of devoted servants for Christ there is a generation of devoted mothers. Faithful mothers teach their children about divine truths, they take their children to church, and instill in them Christian virtues. This Mother’s Day, we’d like to highlight the lives of some of the most devout mother saints, many of whom are depicted in the Basilica. Their devotion to the sacred vocation of motherhood, and sacrifices for their children and God, serve as cause for inspiration and reflection.

Elizabeth Ann Seton was the ​first American​ to be canonized as a saint and is best known for her role in starting children’s parochial education in America. ​Born on August 28, 1774 on Staten Island, Saint Elizabeth was originally raised in the tradition of the Episcopalian church. After spending time in Italy, she was struck by the beauty of Catholicism, and converted in 1805. Following her husband’s premature death, Elizabeth started a Catholic school for girls in Baltimore, Maryland, at the request of a priest. Elizabeth’s most lasting impact, however, was her founding of the Sisters of Charity of Saint Joseph’s in 1809 – the first religious order in America. This order helped hospitals and orphans, but its most prominent work was in establishing the parochial education system in America. Elizabeth’s devotion to educating children and caring for the less fortunate has had an impact lasting well beyond her own life.

Mother Elizabeth Ann Seton is depicted on the exterior tympana of the West Façade, the Hall of American Saints, Miraculous Medal Chapel window, Our Lady of Guadalupe Chapel, and the Trinity Dome Mosaic.

Mother Teresa’s extraordinary selflessness caused Pope John Paul II to skip the customary 5-year waiting period between beatification and canonization. B​orn ​in Macedonia as Gonxha Agnes Bojaxhiu in 1910, she joined the Sisters of Loreto in Ireland in 1928. Here, she was given her religious name, Mary Teresa, and was sent to be a teacher at Saint Mary’s School, where she later became principal. In 1946, on September 10, Mother Teresa experienced a pivotal moment while riding the train. It became overwhelmingly evident to her that she was to commit her life to the poor. She later ​referred to this moment as “the call within a call,” that spurred her to work “for the salvation and sanctification of the poorest of the poor.” Her realization inspired her to found the Missionaries of Charity, where she committed herself to the service of the lowest slums of Calcutta. Mother Teresa’s order would eventually send women all across the world to minister to the impoverished. Her mercy and sacrifice were so profound that she was awarded the Nobel Peace prize in 1979. Mother Teresa visited the National Shrine numerous times, with her first visit in 1972 and her last in 1995.

Mother Teresa can be found in Lower Sacristy window of the Crypt Church, Hall of American Saints, the Trinity Dome Mosaic, and the Universal Call to Holiness.

As Patron Saint of mothers, the unborn, and physicians, Saint Gianna Beretta Molla exemplified a commitment to honoring human life and the vocation of motherhood. Born in Italy on October 4, 1922, ​Saint Gianna​ grew up to train as a medical doctor, specializing in pediatrics. Throughout her life as a single woman, she dedicated her medical skills toward helping mothers and babies, as well as the underprivileged. Following her marriage to Pietro Molla in 1955, Saint Gianna devoted her life to raising her family. Her pregnancy with her fourth child, however, brought an unforeseen trial. Complications caused by a fibroma tumor left her the choice between risking her own life and saving her child’s. Gianna chose to honor the Catholic commitment to the dignity of human life, giving birth to a healthy child on April 21, 1962. She passed away in the days that followed. Her ultimate sacrifice for her child is demonstrative of her devotion and commitment to the sacred vocation of motherhood.

Saint Anne is known as the mother of Mary and the grandmother of Jesus. As existing information about Saint Anne​ comes from the Gospel of James and Catholic legend,​ there is debate over the details of her life. But regardless, it can be agreed that to be mother to Jesus’s earthly mother, Saint Anne must have been a faithful, devoted woman indeed. According to existing accounts, Saint Anne was barren for much of her life. One day in her advanced years, she conceived Mary, the mother of Jesus – “t​he fruit rather of grace than of nature, and the child more of God than of man.​” Saint Anne dedicated the life of her child to the service of God when she was only three – a decision that was undoubtedly formative in the shaping of the future Mother of God.

Saint Anne can be found in the Saint Anne Chapel and the North Apse Ceiling of the Crypt Church.

Prayer, Peace, and Penance: The Message of Our Lady of Fatima
A Mother’s Day Tribute: Mary, Mother of God, as Depicted in the Basilica